Castilleja coccinea, Packera tomentosa, and the leaves of Rudbeckia maxima near the top of a mima mound in a Silveus’ Dropseed Prairie.

In the far northeastern corner of the Lonestar State, near where the Post Oak Savannah, Pineywoods, and Blackland Prairie converge, a special type of prairie can be found.  These tallgrass prairie remnants are found nowhere else in the world, and are home to a unique cast of prairie plants.  Many of their plants are at the periphery of their range here, and are found nowhere else in Texas.  Others are globally imperiled.

Silveus’ Dropseed Prairies, as they’re known, are named for a dominant grass species – Sporobolus silveanus, which occurs sporadically in the West Gulf Coastal Plain, where it is endemic.  However, it is more than the presence of this special grass that make these prairies unique.  The defining characteristic of the Silveus’ Dropseed Prairie is the presence of a wide range of microhabitats formed by tiny variations in topography.  Tiny “mima” mounds rise just a few feet above the surrounding landscape and may 5-50 feet in diameter.

Mima mounds contain vegetation that is stratified in unique zones.  The tops generally contain a thin layer of coarse soils and are domed in shape.  This results in high rates of percolation and runoff, and the mima mound peaks are therefore slightly drier than their surroundings.  Water quickly slows down as it moves overland and through the soil column as it meets finer soil particles, creating moist conditions along mima mound slopes.  In winter and spring, when rainfall is plentiful and many plants are dormant, water often seeps from the base of the mounds during the winter and spring.  Between the mounds shallow seasonally wet or saturated depressions occur, and may contain a variety of sedges, rushes, and carnivorous plants like bladderworts and sundews.  Below are a few images of high quality “virgin” Silveus Dropseed Prairies from Bowie County that have never been plowed. 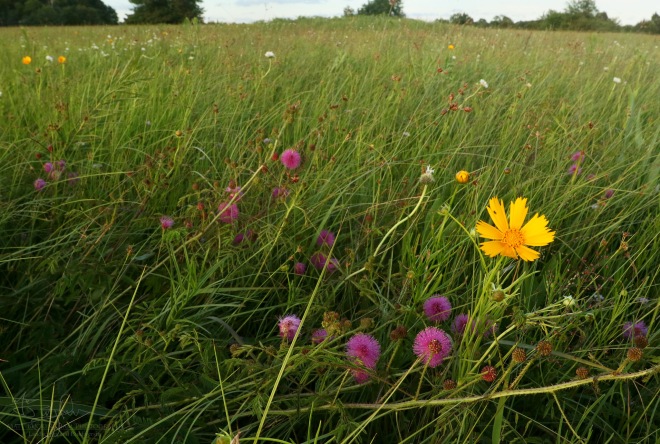 Coreopsis and Mimosa bloom in Silveus’ Dropseed Prairie in early May.  A mima mound can be seen rising slightly in the background.

Delphinium carolinianum and Rhus copallinum from the top of a mima mound.  Woody species such as R. copallinum quickly become established at the peaks of mima mounds, and in the absence of regular disturbance can rapidly encroach into the surrounding prairie.

Distribution of Silveus’ Dropseed Prairie in northeast Texas.  This map is from Jason Singhurst and Matt White’s chapter in Southeastern Grasslands: Biodiversity, Ecology, and Management.

In late March and early April the prairie starts showing signs of life, following months of vegetative dormancy.  A few species may begin to bloom among the brown remain of last season’s grasses as early as late January or early February, however the real show doesn’t begin until after the vernal equinox.  It is in this time that one of the rarest wildflowers in Texas reveals itself, unfurling scarlet red bracts and yellow flowers among the rapidly greening prairie grasses.  Though fairly widespread in the eastern United States, in Texas the scarlet paintbrush (Castilleja coccinea) is only known from a handful of Silveus’ Dropseed Prairie remnants in Bowie County, and its presence here was only recently formally documented.

Scarlet paintbrush in a Silveus’ Dropseed Prairie in Bowie County.

At first glance, it would be easy to mistake scarlet paintbrush for the Texas paintbrush (Castilleja indivisa), which is widespread and common in the state.  The lobed bracts and deeply lobed leaves of C. coccinea most readily differentiate it from C. indivisa.  C. coccinea also possesses basal leaves that persist through anthesis (flowering), while the basal leaves of C. indivisa either absent, or whither prior to anthesis. 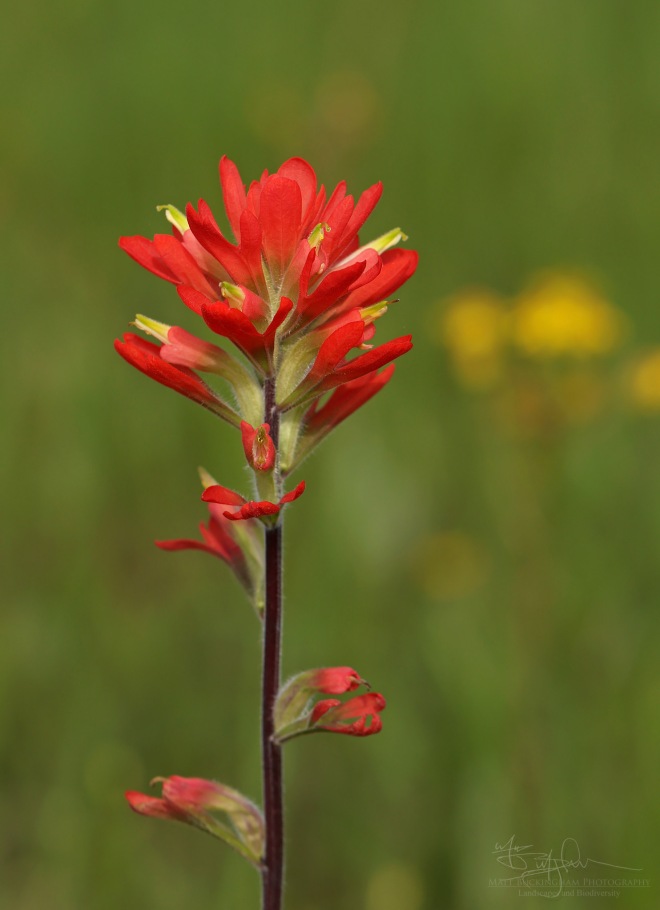 Castilleja coccinea is the only paintbrush species present in the vast majority of the eastern U.S.  It occurs primarily in prairies, barrens, glades, and open woods.  It is hemiparasitic, meaning that it obtains some portion of its energy and nutrients from the roots of other plants. 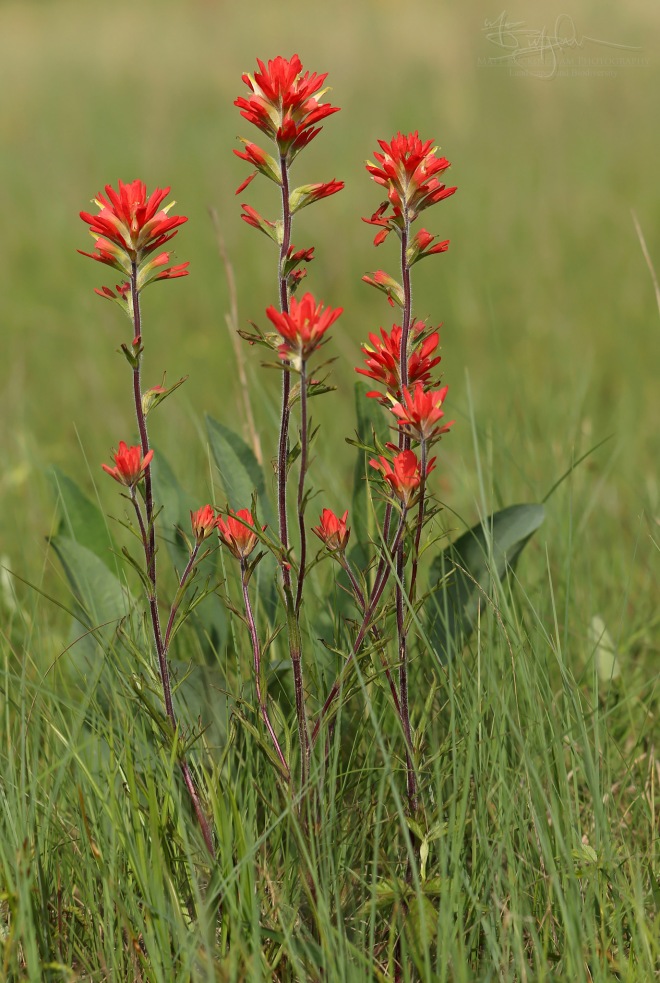 Scarlet paintbrush with the basal leaves of Rudbeckia maxima in the background.

The pale coneflower (Echinacea pallida) is another example of a species that is relatively widespread but rare in Texas.  Here it occurs in a few Silveus’ Dropseed Prairie remnants and meadows in the eastern Cross Timbers north of Dallas.  There are several species of Echinacea in Texas, and identification can be difficult.  E. pallida stands out, however, as it’s pollen is white.  The white pollen can be seen below on the anthers of the disk flowers.

The range of the Topeka purple coneflower (Echinacea atrorubens) is much more restricted than that of E. pallida.  E. atrorubens is primarily restricted to a narrow band of tallgrass prairie from eastern Kansas south to eastern and central Texas, where it occurs in scattered populations.  E. atrorubens can be identified by its short, bright pink ray flowers.

Wild Quinine (Parthenium integrifolium) is a species of the eastern United States that also reaches the southwest extent of its range in extreme northeastern Texas, where it’s rare, confined primarily to Silveus’ Dropseed Prairies and a few other prairie remnants of similar composition.  Wild quinine  has a long history of use as a medicinal plant by native cultures and early settlers to eastern North America. It was used to treat a wide variety of ailments, from burns and sore muscles to dysentery. More recently, it was used during World War I as a substitute for cinchona bark in the anti-malarial drug quinine. 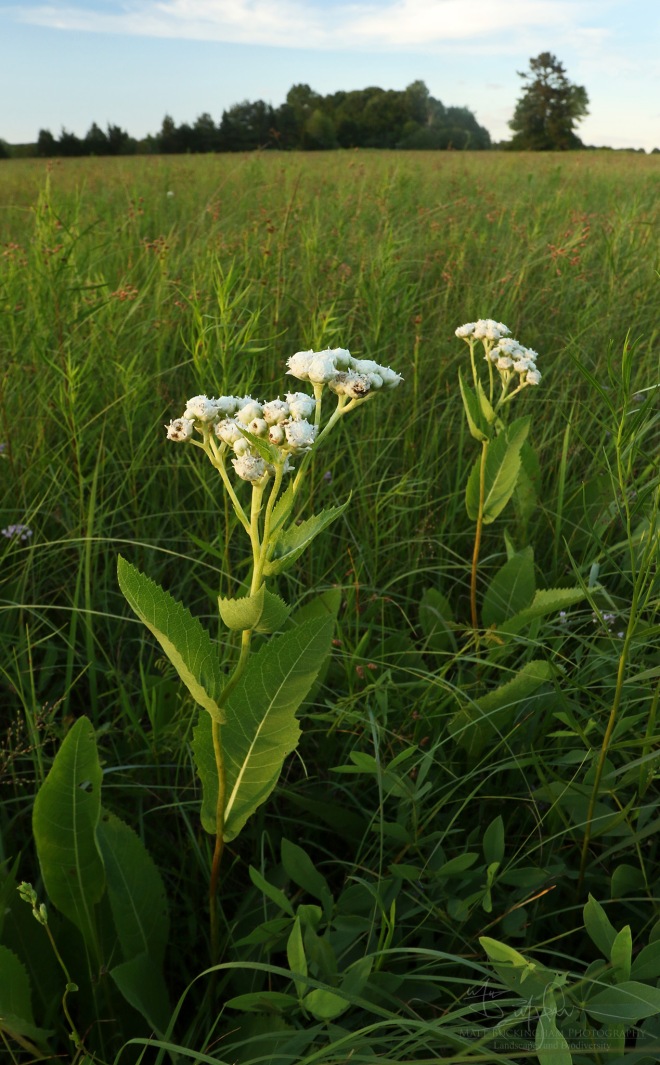 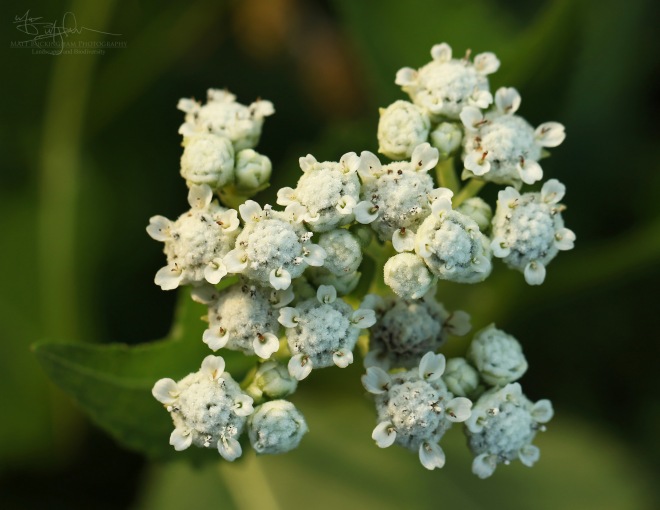 Parthenium integrifolium has interesting flowers.  From a distance they don’t look like much, but viewed close they are really quite unique and showy in their own right.

I saved the “best” for last.  Not best in terms of the quality or importance of the plant, but because it is the species that I was most excited to find and photograph this spring during a few sojourns to northeast Texas. The ragged fringed orchid (Platanthera lacera) is an orchid of the eastern U.S. and southeastern Canada. It inhabits a variety of habitats across its range, including open woodlands, moist prairies, fens, and herbaceous seeps. In the extensive research that they conducted for “Wild Orchids of Texas”, Joe and Ann Orto Liggio located a single record of P. lacera for Texas, made by Donovan and Helen Correll in an “open woodland” in Bowie County. At the time their book was published, there were no other documented occurrences in the state. It has since been discovered in a high quality Silveus’ Dropseed Prairie remnant in northeast Texas. After hours of searching, I practically jumped for joy when I finally located one in a microtopographical swale within the prairie, growing alongside the basal flowers of Rudbeckia maxima, spent blooms of Calopogon oklahomensis, Sporobolus silveanus, and a variety of sedges.

I spent a very long time photographing this orchid, as to my knowledge there are only a handful of individuals that have seen it blooming in Texas.  I tried to capture it from every angle, and in a variety of lighting situations.  Of course, after I had spent two hours one evening and another two hours the next morning before finally locating one, when I returned with Caro to show her, she spotted another in a completely different area on the prairie within minutes of arriving.

Backlit Platanthera lacera. The prairie can be seen reflected upside down in the largest water droplet. 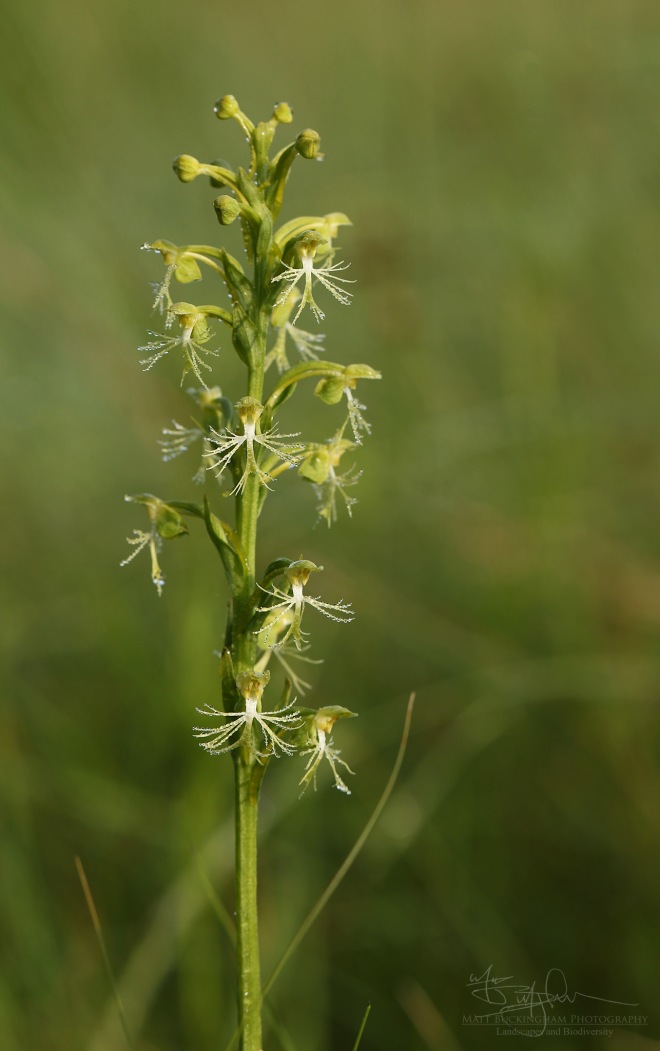 Platanthera lacera with slight side-lighting from a sun softened by a thin veil of clouds.

Silveus’ Dropseed Prairies harbor many other rare plants not mentioned here, including the only record of Penstemon oklahomensis for Texas, swales full of the globally imperiled Schoenolirion wrightii, and the most robust Calopogon oklahomensis populations in the state.  The presence of such rare, diverse plant communities and the rapid destruction and degradation of prairie remnants throughout Texas and the rest of the country highlight the need to protect what little remains of this vulnerable community.  Fortunately, dedicated conservation professionals have been hard at work, and The Native Prairies Association of Texas and The Nature Conservancy in Texas have succeeded in protecting several important remnants of these special prairies.  Please click on the names of these organizations above to find out how you can help protect the prairie that is so important for biodiversity, environmental services, and the natural heritage of Texas.