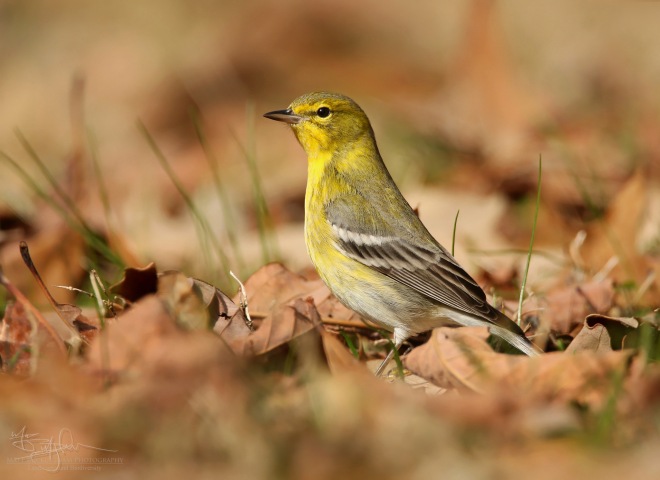 A Pine Warbler forages for caterpillars, grubs, and other invertebrates among the leaf litter.

This January seemed to have it all.  From lingering fall color to nights in the 20s and days pushing 80.  The diversity of climatic conditions brought with it a diversity of photographic subjects.  For my first photographic outing of the New Year I was joined by my pal and frequent photo companion James Childress.  We went to one of our favorite bird photography haunts in Nacogdoches County.  Here I turned my lens to a handsome White-throated Sparrow (Zonotrichia albicollis) perched before a large Arrowwood Viburnum (Viburnum dentatum) in a full display of “autumn” foliage.  Some of these sparrows spend the winter in East Texas, and as the days lengthen and the temperature warms, they will return to their breeding range in the northern U.S. and Canada. 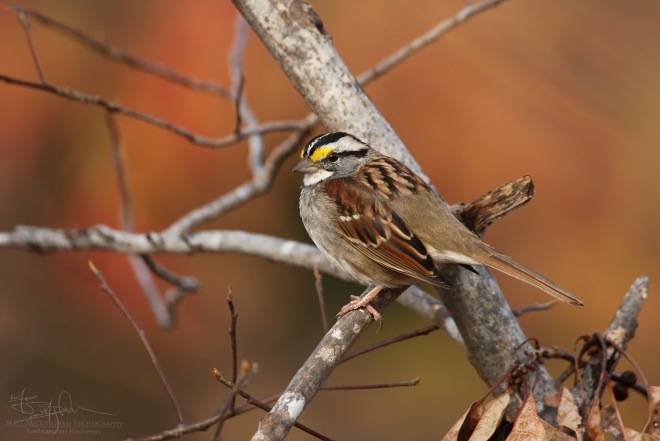 Our next subject was a resident bird, though many are unaware of its presence as a low density breeder in the Pineywoods.  The White-breasted Nuthatch (Sitta carolinensis) is a lovely bird that inhabits mature hardwood and pine-hardwood forests, and forage by scampering up and down tree trunks and large branches, often flicking off bits of bark in search of tasty insects hidden beneath. 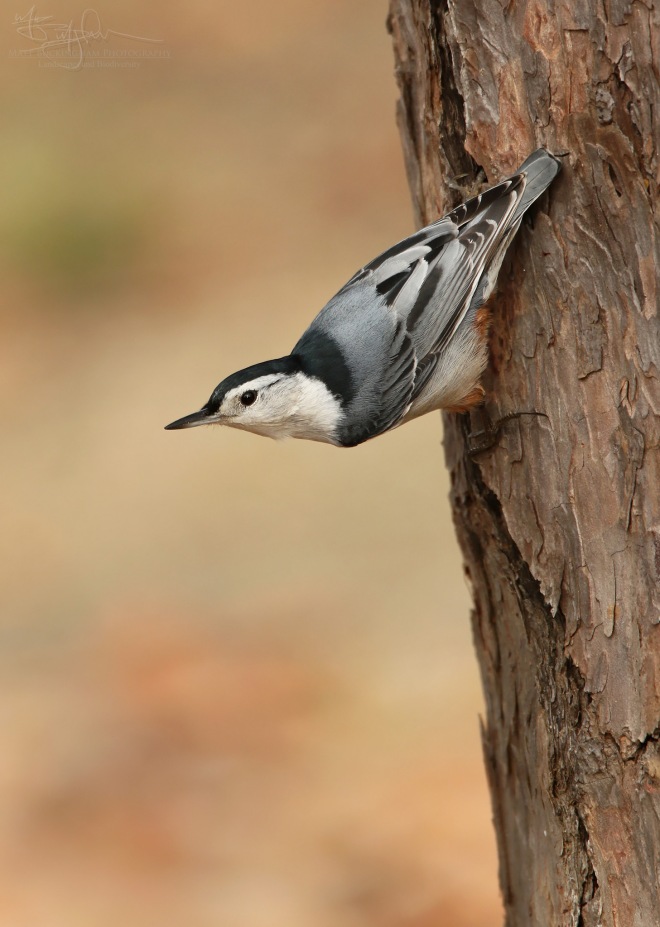 A week later James and I returned to this wonderful patch of woods.  We were intent on targeting a Brown Thrasher (Toxostoma rufum) that we had spotted during our previous outing.  The thrashers’ propensity to lurk in dense thickets of vegetation presents a real challenge for capturing a good image.  I hoped to capture one on the ground, as it is my experience they spend much of their time here, flipping through dense leaf litter in search of food.

James and I pursued the individual below as it made its way through a dense understory of Florida Maple and Carolina Laurelcherry saplings.  We weren’t having much luck getting a clear shot through the undergrowth and downed branches, so I opted to advance ahead in the direction that the bird was moving, and position myself low on the forest floor with a clear shot of a clearing into which I hoped it would pass through.  I waited and watched through my viewfinder as it approached.  Finally it hopped into the clearing and paused just long enough for me to capture a few frames of this furtive mimic among the fallen maple leaves and emerging wood sorrel. 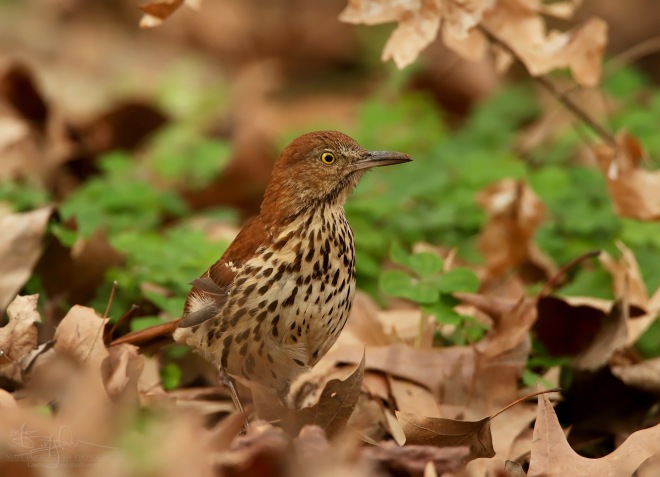 Not far from the thrasher I spotted a young male Pine Warbler (Setophaga pinus) foraging among the leaves.  It would routinely hop about, capture some juicy grub, and fly to a more protected perch to enjoy its prize. 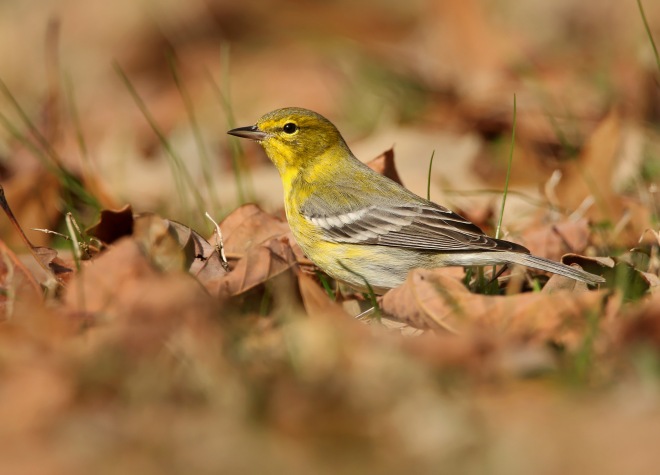 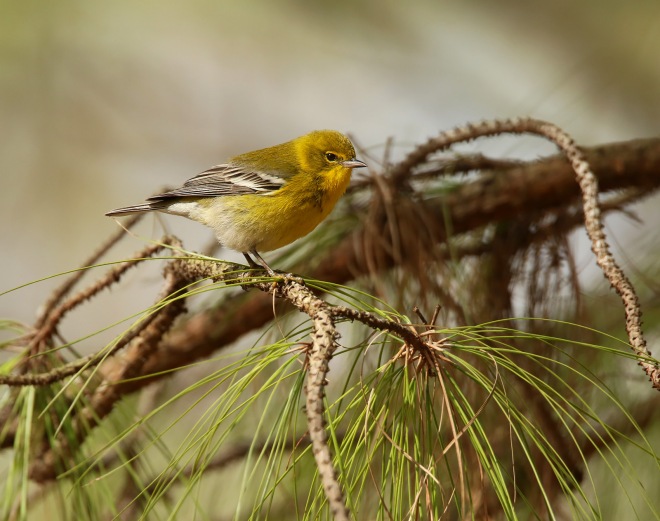 Deeper into the woods I was surprised to see the bright white blooms of Bloodroot (Sanguinaria canadensis).  This year there were already some in fruit on January 25.  This is notably earlier than I typically see them emerge, which used to be around the second week of February but seems to get earlier and earlier each year.  The Bloodroot is one of my all time favorite wildflowers, and I’ve featured it in many past blog posts.  It is one of those magical components to an ephemeral vernal flora that make spring such a wonderful time to be out in the woods. 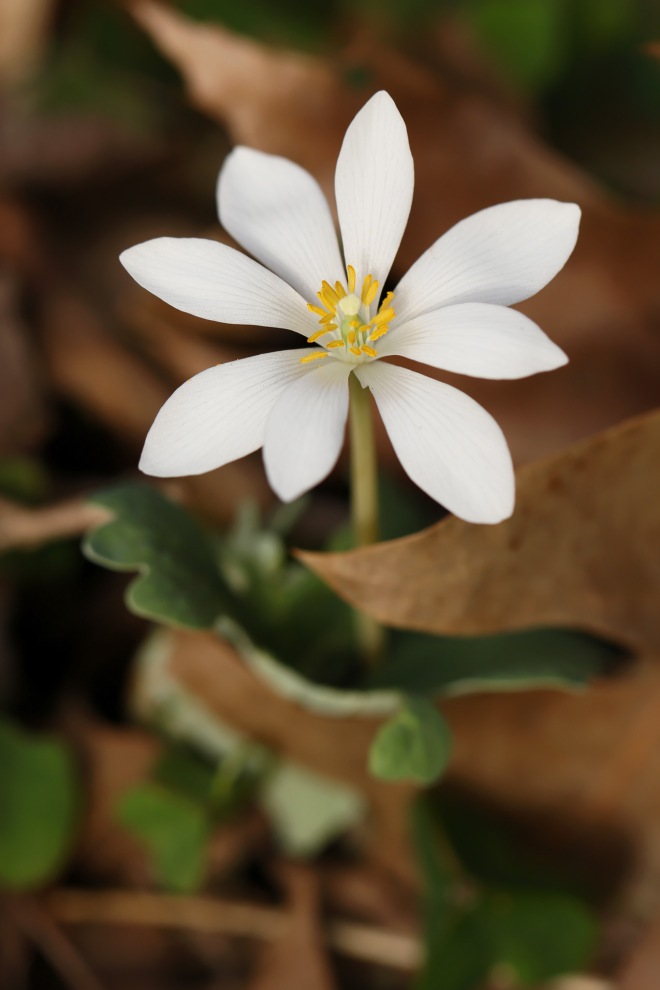 The next week Carolina and I returned to meet with a professor at my alma mater (Stephen F. Austin State University) to discuss a research project.  After my meeting I met up with James again and we set out to see what we could find.  While James and I had our eyes focused on the branches, Caro stopped us dead in our tracks to point out a snaked stretched out near an old stump.  It was a nice Eastern Coachwhip (Masticophis flagellum), soaking in some of the unseasonable warmth.

Snakes may be the single most hated, feared, and misunderstood group of animals on the planet. The reason may be in some small way evolutionary programmed, however the vast majority of this animosity comes from misconceptions and ideas that are not grounded in truth. It is a shame, too, because as a group snakes are beneficial to us in so many ways – from pest eradication to cancer treatment. It is important that those of us who understand the true nature of these special animals spread the word, and work toward dispelling the myths that surround them, even if it is and always will be an uphill battle. 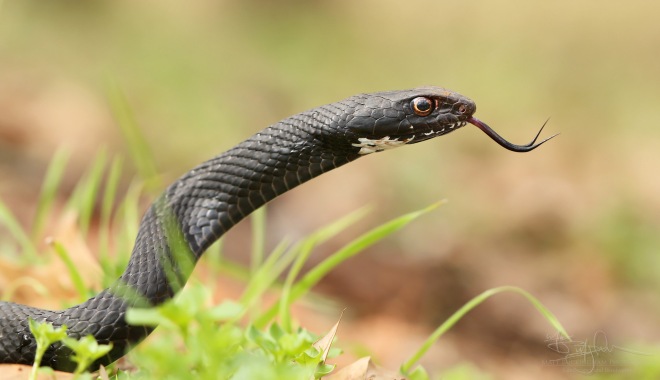 Eventually the coachwhip retreated to the refuge of a downed tree.  It was there we spied a little Carolina Wren (Thryothorus ludovicianus) perched among the tangle twigs.  These are one of our most familiar area birds.  Despite this, I have very few images of them, so on this occasion I decided to snap a few. 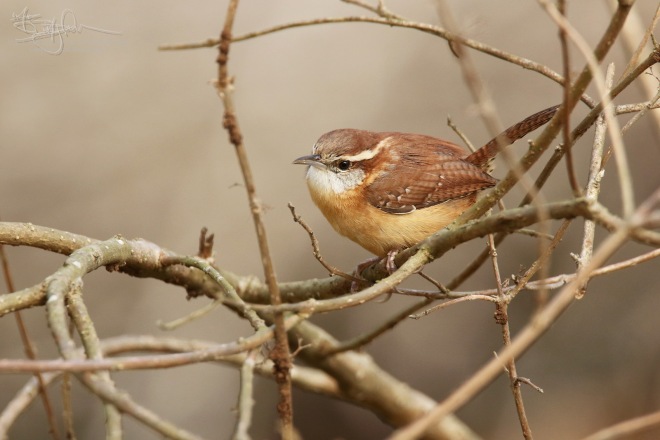 I say mixed emotions in the title, because though I enjoyed the diversity of subjects and conditions, I can’t help but feel concerned by what seems to me to be a trend of more erratic weather patterns.  Granted, the weather in Texas has rarely been stable, but I have noticed a trend of greater frontal temperature variations and each year Spring seems to come just a tad earlier.  Climate change is one of the most controversial, divisive issues we’re facing today.  I don’t pretend to know the intricacy of this process, nor to have the solution, but I am certain that it is important, and certainly warrants our attention.  I hate to think of some future scenario where something precious is lost, and we could have done something to prevent it but didn’t.