Between August 1 and September 30 I was able to cross 5 more species off my list, 3 of which came from another trip to the Davis Mountains:

Although we spent most of our time during our August trip to West Texas in the Davis Mountains, we camped the last night on the shore of Lake Balmorhea.  I found the Sacred Datura (Datura wrightii) pictured above right at daybreak as I explored the area around our tent.  The flowers of the Sacred Datura are primarily pollinated by large sphinx moths.  As a result they open in the late evening and close in the early morning.  Sacred Datura has a long history of significance for the people of the southwestern U.S. and Mexico. It is well known for its potentially lethal toxicity. However it has also been used extensively for medicinal purposes. The plant was also used by many native tribes in religious ceremonies, often to induce visions.due to its hallucinogenic properties. Unfortunately, the potency of its toxins resulted in the death of many of its users.

On the drive home we stopped at a few rock outcrops to help break up the drive and stretch our legs.  It was at one of these outcrops that we spotted the Cory’s Dutchman Pipe (Aristolochia coryi).  In the U.S., this bizarre plant can only be found in central and western Texas. 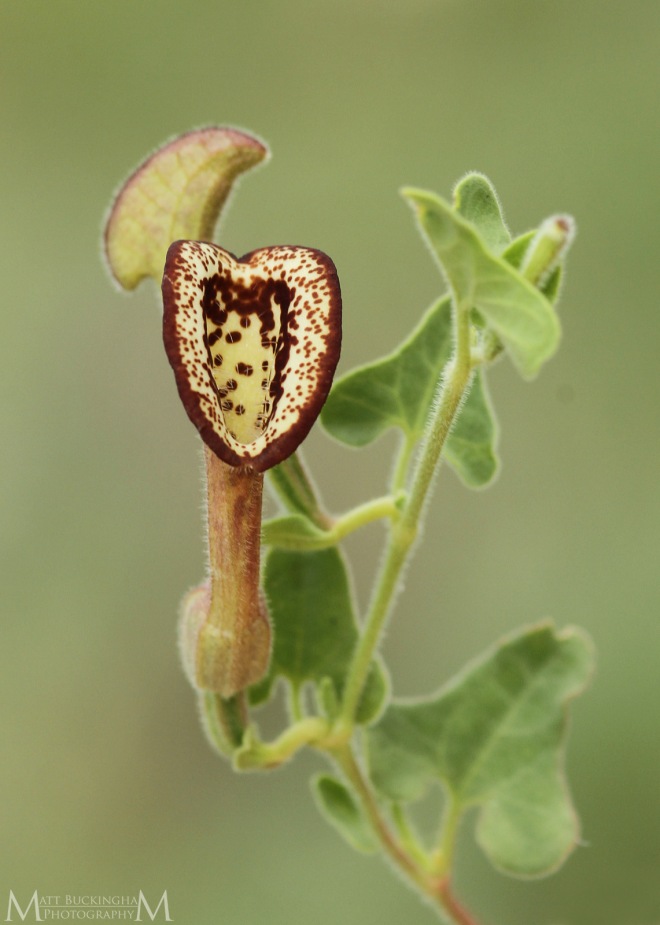 Back in East Texas, my friend James Childress and I went looking for some late summer wildflowers.  Two of my favorites are the Yellow Fringed Orchid (Platanthera ciliaris) and the Carolina Lily (Lilium michauxii).  Both species are uncommon in East Texas.  P. ciliaris occurs in herbaceous seeps, baygall margins, and occasionally wet ditches and prairie remnants.  L. michauxii primarily occurs on the upper slopes of rich mesic ravines, often near the transition zone between slope and upland.

While hunting for wildflowers James spotted a most interesting creature.  The Giant Ichneumon (Megarhyssa macrurus) is a large parasitic wasp with extremely long ovipositors.  They use these ovipositors to probe tunnels created by the larvae of horntail wasps.  Horntails bore into the wood of dead and dying trees.  The female ichneumon seeks out these larvae and with her ovipositor and lays her eggs on or in them.  Her own larvae then parasitize the horntail larvae.  The young ichmeumons will feed only on the horntails, killing them in the process.  They will then pupate and emerge as adults from the tunnel that their host created for them.

In late August Hurricane Harvey passed through East Texas and dumped unprecedented amounts of rain on the region.  Following the storm, James and I went looking for reptiles and amphibians, hoping that they would be active following the prolonged period of moisture.

We found a number of Southern Copperheads (Agkistrodon contortrix), the most attractive of which is pictured below.

Among the amphibians observed was this enormous Gulf Coast Toad (Incilius nebulifer). 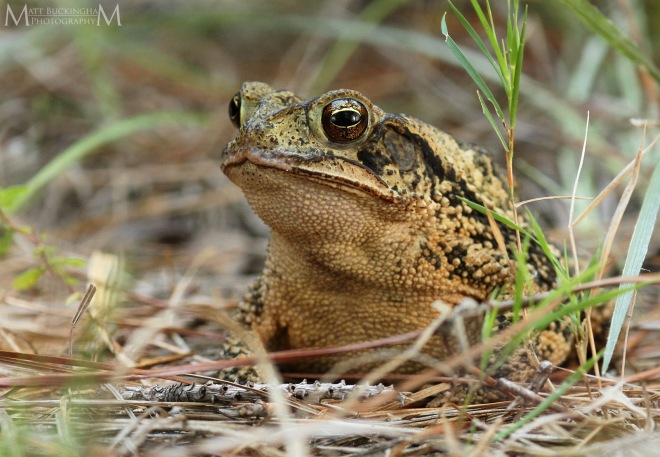 The prolonged rainfall brought out scores of Hurter’s Spadefoots (Scaphiopus hurteri).  These interesting frogs can be extremely abundant in certain areas, but require specific habitat conditions.  These conditions typically consist of areas with deep, undisturbed sand where they can burrow and aestivate during the hottest and driest part of the summer.  This species emerges only after heavy rains, where they may breed by the thousands in small ephemeral wetlands that may be little more than a puddle.  The tadpole stage for these spadefoots is among the shortest of any frog, requiring as little as two weeks to go from an egg to a froglet capable of leaving the water.  This short larval stage is an adaptation to allow them to breed in areas were the presence of water is a limiting factor, and allows them to breed in areas that other species are not capable of utilizing, effectively eliminating the competition.

September is perhaps the best time to visit Catahoula Barrens.  Wildflowers such as Texas Blazing Star (Liatris mucronata) and Nuttall’s Rayless Goldenrod (Bigelowia nuttallii) bloom in mass.  Downy Lobelia (Lobelia puberula) is fairly common in wetter areas along the margins of the barrens. 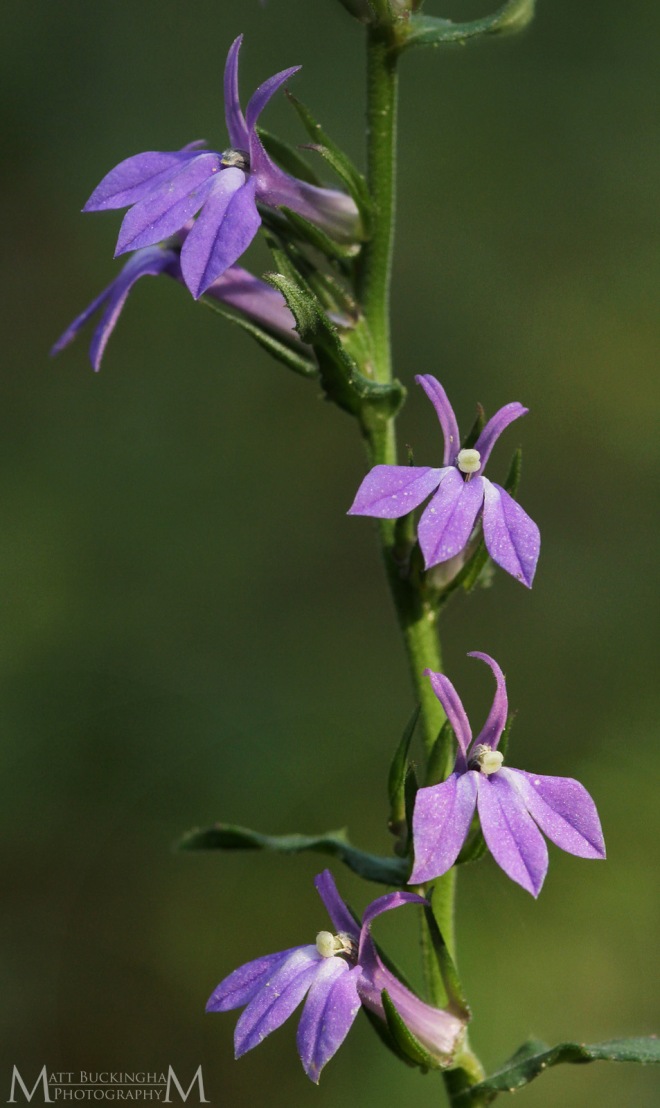 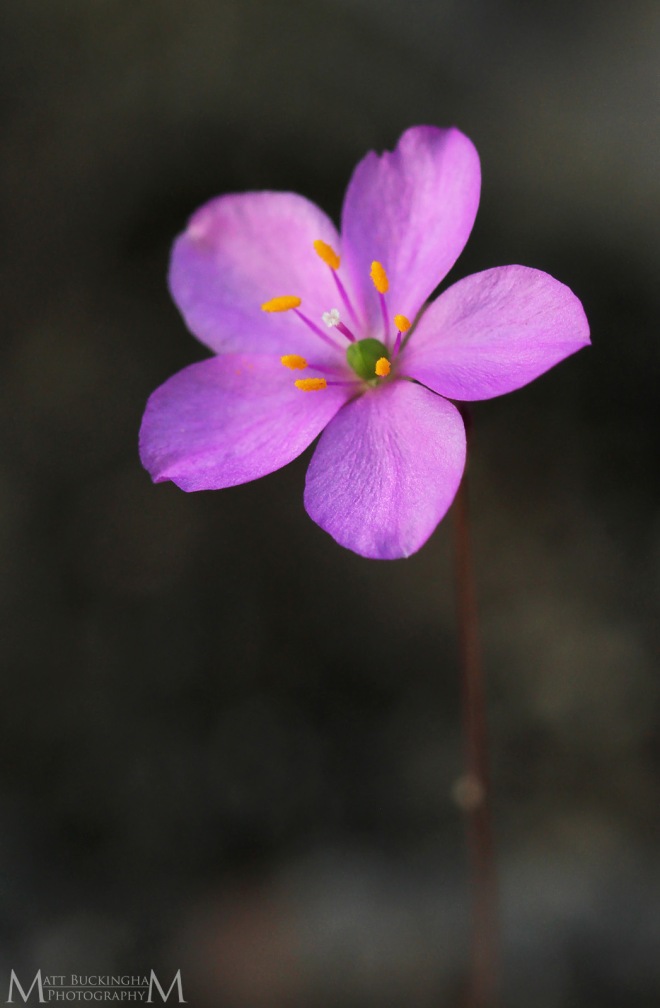 I leave you with this final shot of a Catahoula Barren.  I captured this shot at dusk and tried to highlight the rich diversity of colors that can be found in these incredible landscapes.

Some reading this may wonder why I chose to include this tiny, not particularly showy flower on my 2017 species list.  I have always been fascinated with rare, unique ecological communities and the flora and fauna that reside in them.  The Texas Saxifrage grows in some particularly unique communities.  It tends to prefer places with harsh soil conditions that create an environment where most plants would struggle to survive.  By utilizing these habitats it helps avoid competition from other plant species that would try to monopolize its resources.  In the Pineywoods of East Texas it has been recorded in two particularly interesting communities: Catahoula Barrens and Weches Glades.

I set out to find this species alone.  And while I missed Carolina’s company, I treasure alone time in nature.  It is far and away the best way for me to clear my head and put things in perspective.  On a warm, mostly sunny February day I set out to an extensive Catahoula Barren less than an hour from home.  Catahoula Barrens were probably never abundant on the landscape.  They occur on coarse, shallow soils over the Catahoula formation.  These soils are acidic, and often high in aluminum content.  Taken together these conditions are not favorable for tree growth.  That is not to say, however, that trees do not occur here.  Widely scattered Longleaf Pines, and Bluejack and Blackjack Oaks can be found as stunted, gnarled versions of their counterparts elsewhere.  An old growth Longleaf Pine here, for example, may be little more than 10 inches across and thirty feet tall. 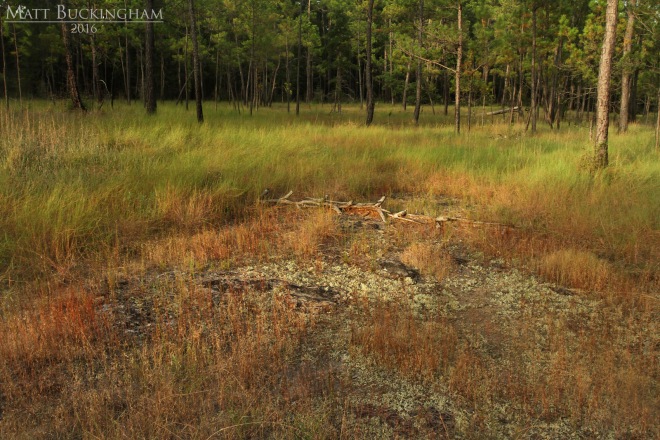 Typical Catahoula Barren.  I captured this image in July, 2016.

I had visited this Catahoula Boulder many times in the past, but never so early in the year.  I worried that these miniscule plants would be elusive, however it didn’t take me long to find them among the dried grasses and fallen oak leaves.  Though tiny, I find the flowers of Micranthes texana to be quite beautiful.  Their tiny size, however makes photographing them a real challenge.  The slightest breeze makes focusing on the anthers, a standard practice of wildflower photography, almost impossible.

After spending some time with this remarkable plant, I set out to see what else might be blooming in the barrens.  As one might expect so early in the year, blooms were sparse, however I was able to locate a few other wildflowers in the area.  I observed several Carolina Anemone (Anemone caroliniana) blooms on the barren’s margins.

Yellow Hedge-Hyssop is endemic to eastern Texas and extreme western Louisiana.  This tiny plant is scarcely 3 inches tall, and if it weren’t for its propensity to grow on exposed Catahoula boulders, it would be all but invisible.

After spending the afternoon in the barren I ventured over to the adjacent longleaf pine savannah.  Here I sat and watched a colony of Texas Leafcutter Ants (Atta texana) busily tending to their maze of subterranean tunnels and chambers, and harvesting bits of leaves by the thousands.  They do not actually consume the leaves, but rather store them in an underground chamber to cultivate a fungus that will feed the colony.  I have always been fascinated with these invertebrates, and usually try my luck at photographing them every year.  It is a challenge, but the results can be extremely rewarding.

With another 2017 target under my belt, I left the woods to return to civilization, if only to plan and ponder my next opportunity to escape it.