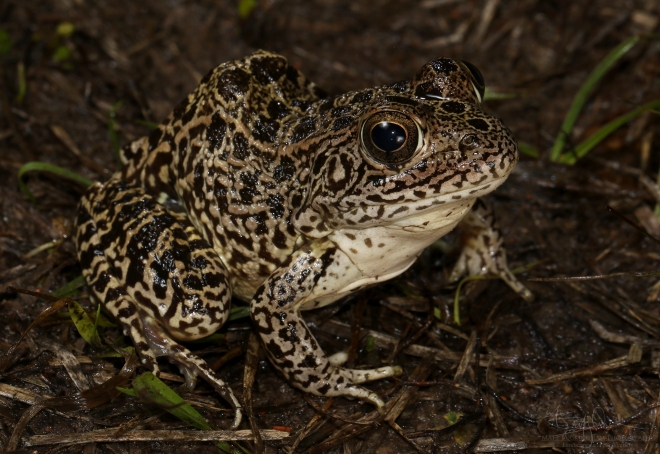 When General Manuel de Mier y Teran crossed the Pineywoods, East Texas was a patchwork of habitats.  Pine-dominated forests were largely restricted to upland ridges, while gentle slopes and stream floodplains were dominated by hardwoods.  And situated within this matrix of woodlands, where soil conditions and disturbance regimes were just right, existed prairie patches that supported plants and animals typical of the great tallgrass prairies that extended from the Texas coasts into southern Canada.

Less than hundred years after Teran’s famous expedition, the Pineywoods would be forever changed – scarred by the saw, and later the steam engine and the dozer.  Virtually all of the magnificent virgin forests were cut.  Pockets of prairie were converted to pasture and agriculture, or developed for human habitation.  As their habitat disappeared, so did many of the prairie obligate species that depended on them.

The conversion of prairie habitat is not unique to East Texas.  It has occurred, and continues to occur throughout the country, and many species continue to experience precipitous declines as a result.  Some grassland dependent songbirds, for example, appear to have declined by over 90% in a matter of decades.  It has become evident that if drastic measures are not taken, some of these species may be lost forever.

There is a ray of hope in this story of doom and gloom, however.  Within the past few years, a prairie amphibian that had not been recorded from the heart of East Texas for decades was relocated by Toby Hibbitts and other herpetologists in a concentrated survey effort across its historic range in Texas.  The characteristic “snore” of the Crawfish Frog (Rana areolata) was once again heard in the Pineywoods.

Like the grassland songbirds, the Crawfish Frog has been experiencing sharp declines in the past several decades and is considered a species of conservation concern in most states where it occurs.  Its strongholds in Texas are in the western reaches of the coastal prairies and marshes and portions of the Post Oak Savannah and Blackland Prairies.  Hibbitts, et. al. discovered that they were still hanging on in isolated populations in the Pineywoods.

I never thought I would see one of these enigmatic prairie dwellers in the Pineywoods.  I imagined it had gone the way of the Jaguar and the Black Bear – something lost to my generation.  So when suitable conditions presented themselves this spring Carolina and I set out one misty evening with our good friends James and Erin to see if we might find one.

In all honesty my hopes weren’t all that high.  It has been a weird spring this year, with a lot of moisture and wildly fluctuating temperatures.  But within 30 miles of our house, we spotted a mottled form on the pavement in front of us.  I rushed from the car and found before me a mangled mix of frog skin and guts.  It was a roadkill Crawfish Frog.  It was a bittersweet feeling for sure.  I had seen a Pineywoods areolata, but it was dead.  Freshly dead at that, as its rear legs were still twitching.  I was at the same time disappointed and encouraged.

As I took the frog in my hands and soaked in the tranquility of the evening, I could feel my ears perk as they drew in a distant sound.  In that moment Erin turned off the engine and the night came to life.  The ratcheting call of Cajun Chorus Frogs reached me first, followed by the cackling song of Southern Leopard Frogs.  Then I heard it, fainter and more distant than the rest – the nasal snore of the Crawfish Frog.

We bagged the dead frog in order to send to Toby for his research.  I then wandered down the road, flashlight in hand.  After a while I noticed a turn for a side road heading in the direction of one of the frog choruses.  The night was very dark and a thin veil of mist hang suspended in the air.  With my light I could only see where the road began.  I turned down this road, and soon found myself walking a two track gravel pathway pushing out into what looked like a pasture.  I could not see any “No Tresspassing” signs or purple paint, and there were no lights anywhere on the horizon.  Convinced that it was not private property, I continued.  The chorus grew louder.  I scanned my flashlight in all directions.  There was a fence to my left, and to my right there were several granite pillars emerging from the fog.  It became clear that I was wandering through a graveyard.

Despite the eeriness of the situation, I felt comfortable, and continued on joined by the rest of the party.  We soon realized that the frogs were calling in a pasture beyond the fence, in a place we could not reach.  So we decided to continue down the road, but first made our way through the cemetery toward its exit.  I swept the beam of my flashlight across the ground, and to my surprise caught glimpse of a reticulated, spotted thing resting among emerging shoots of grass and prairie forbs.  It was a Crawfish Frog.  I couldn’t help but smile.  We found one.

It was a beautiful animal, and a female of decent size.  Immediately after seeing us she arched her back and inflated her mid section in order to appear larger, more threatening.  This defensive posture also presents potential predators with a more difficult-to-swallow prey item.

Crawfish Frogs are dependent on prairie communities, where they spend most of their lives in or around crayfish burrows.  In this part of the state they may utilize burrows of the Texas Prairie Crayfish (Fallicambarus devastator), a species endemic to a handful of counties in East Texas.  We would see many that night.  Research has shown that the frogs utilize both primary and secondary burrows.  They spend most of the year at primary burrows, while they utilize secondary burrows while migrating to and from breeding sites, and perhaps to a lesser degree while foraging during prolonged periods of rain outside the breeding season.  Crawfish Frogs breed in ephemeral wetlands formed in prairie depressions and in fishless manmade ponds located within suitable habitats.  They have a prolonged breeding period in Texas, but generally breed en masse following warm rains in early spring.

Interestingly, these frogs are able to persist in heavily grazed areas.  Presumably, it is because they are heavily dependent on the condition of the soil rather than the structure of vegetation.  It is important that the soil column and crayfish burrows remain in tact.  In areas where the soil is tilled or otherwise disturbed, the frogs quickly disappear. 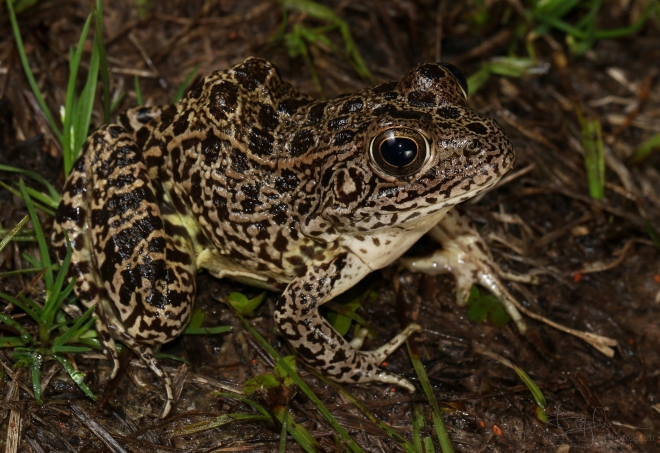 She would be the only Crawfish Frog we would see that night, though we did hear a few more choruses.  It was an incredible experience.  While encountering a seemingly thriving population in the Pineywoods certainly gives me hope, it does not change the fact that this species is on the decline and highly susceptible to the loss of our prairies.  We need to “want” to have this species around, and make a serious effort to conserve its habitat, or the story of its status in the Pineywoods fifty years from now may be a very different one.  Fortunately there seems to be a genuine interest in research and conservation of the Crawfish Frog in the Lonestar State, and I remain hopeful that when the conditions are just right on warm, rainy spring nights, future generations of East Texans will continue to hear the peculiar snore of this special prairie denizen.