It was birds that first sparked my obsession with photography some 15 or so years ago.  I remember my excitement when I finally got a 3.2 megapixel camera with a 10x optical zoom, when digital cameras were still in their infancy.  Over the next few years I would receive my first digital SLR from my parents, which opened up a whole new world of photographic opportunities, followed shortly by a canon 100-400mm zoom lens.  I spent a lot of time photographing with that lens, and made some images that still rank among my favorites.  But over the years I began to branch out, and learned that photographing less erratic subjects, like reptiles and amphibians, wildflowers, and landscapes, while challenging in its own right, was much less frustrating than bird photography.  It was easier to get “the shot”, as I could control most aspects of the subject, and executing the shot fell largely on my skills as a photographer.  With birds, while one still must rely heavily on skill, we are at the mercy of our flighty subjects.

So bird photography took a back burner.  While I enjoyed the 100-400mm lens, it just didn’t produce the high quality images that I wanted on a regular basis.  Conditions had to be just perfect, and the subject extremely cooperative to get the type of shot I was after.  I honed my macro and landscape skills, and only occasionally returned to my feathered friends.

While I couldn’t say that I like birds more than flora or herps, it is true that in my professional career I have more experience with the Class Aves than any other group.  For my Master’s I studied the avian communities of Iguazú National Park in northeastern Argentina, where I would meet my future wife, Carolina.  I have also studied Snowy Plovers in the salt lakes and playas of the Texas Panhandle, and the rare and declining avifauna of the saltmarshes of the Delmarva Peninsula.  So as bird photography, and coincidentally birdwatching began to vanish from my life, it felt like I was left with some void.

As luck would have it, right around Christmas my good friend James Childress lucked into a fantastic deal on a very lightly used Canon 600mm.  In my book this is THE bird photography lens.  It is the lens that the pros I admired used.  It is the lens I always dreamed about but thought I would never have.  One thing that you need to know about James (and his wife Erin) is that they are extremely generous, and value shared experiences and good times over personal possessions.  Being that James and I spend a great deal of time in the field exploring and photographing together (he often credits (blames?) me for his own obsession for nature photography) , he told me that he would like me to help him test out the lens.  I was, of course, honored and overwhelmed at the thought of this dream come true.

James with his new lens

Wanting to be a good friend, I not-so-reluctantly obliged to James’s generous offer.  So we set out to test the capabilities of the new lens.  While I will only be posting my images in this blog, I HIGHLY recommend that you check out James’s Flickr photostream (click here).

We took a weekend trip to the coast, where we first found several Ring-necked Ducks (Aythya collaris). 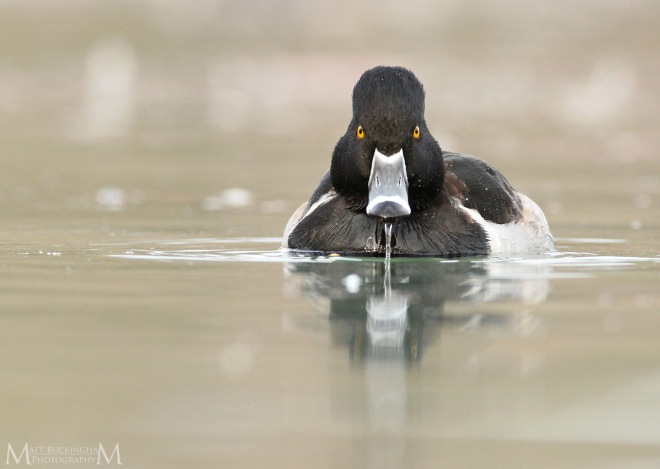 I was supremely impressed with how the lens captured the handsome diving ducks.  But wondered how it would work on smaller, more active birds.  I would soon get my chance.  It’s hard to imagine a bird much smaller or more active than the Ruby-Crowned Kinglet (Regulus calendula), but the lens captured it beautifully among the Spanish Moss draped on an old Cedar Elm. 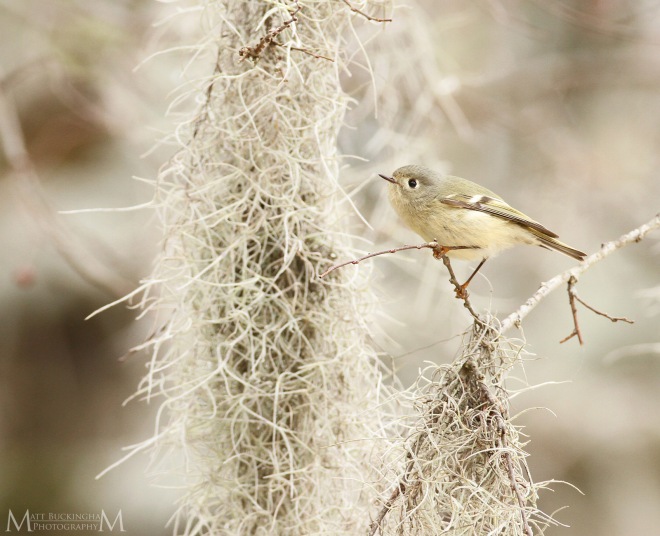 Just because I was growing interested in birds again doesn’t mean I was about to neglect the other photographic subjects I had grown so fond of.  We found this huge River Cooter (Pseudemys concinna) basking on a cold day. 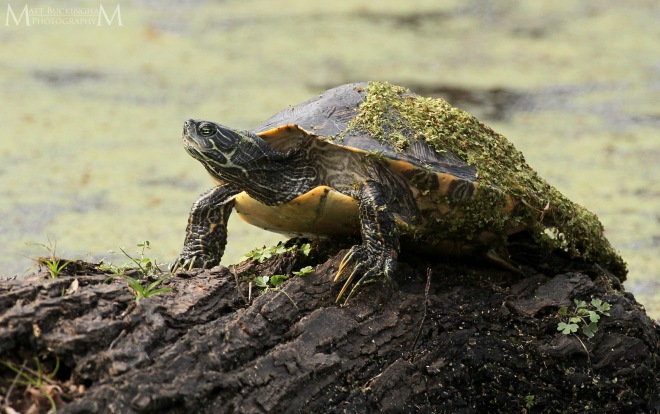 I was amazed at how well the lens captured the ambient light.  I opted for a low angle on this Common Gallinule (Gallinula galeata) to help isolate it from the wetland plants it was sheltering among.

Perhaps the highlight of our weekend trip to the coast was observing several American Bitterns (Botaurus lentiginosus).  Though they are quite large, these are very cryptic birds, and can be hard to isolate from their surroundings.  Thanks to the focal length and low aperture capabilities of this lens, however, getting this master of camouflage to pop was easy.

We also tried our hand at capturing some in flight images along the Gulf of Mexico.  Admittedly, with the extreme focal length this was a bit challenging, however we soon began to get the hang of it and honed our skills on dozens of Black Skimmers (Rhynchops niger) that patrolled just off shore, skimming the shallows with their specially adapted lower mandible.  When it feels a fish it snaps shut with lightning-like speed, trapping a meal for this unique member of the gull family. 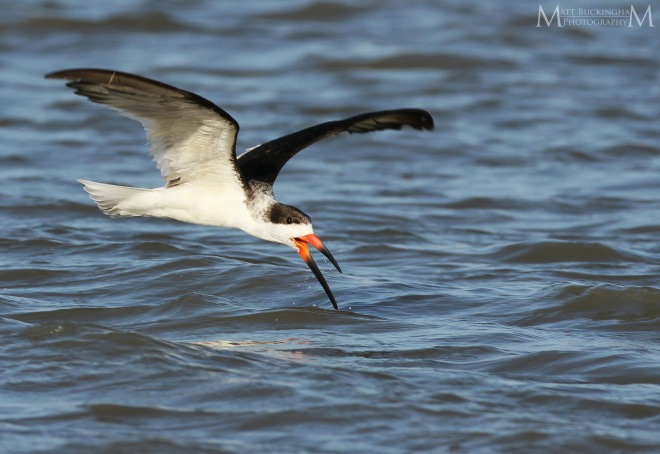 Nearby we saw waves of American White Pelicans (Pelecanus erythrorhynchos) coming in to roost.

As the tide began to creep in we spotted a group of small shorebirds bouncing around in the sand.  Among the mixed species group were a few Snowy Plovers (Charadrius nivosus), the species I had spent a summer collecting data on in the Panhandle.  The lens allowed us to create images where the foreground and background seemed to blend together.

Still reeling from the success of our trip to the coast, James and I wanted to try the lens out on our home turf.  So we spend several days exploring his expansive property in Angelina County, and documenting the birds as best we could.  I captured this American Goldfinch (Spinus tristus) on a frigid morning, when puddles from recent rains froze solid and frost clung to the leaves. 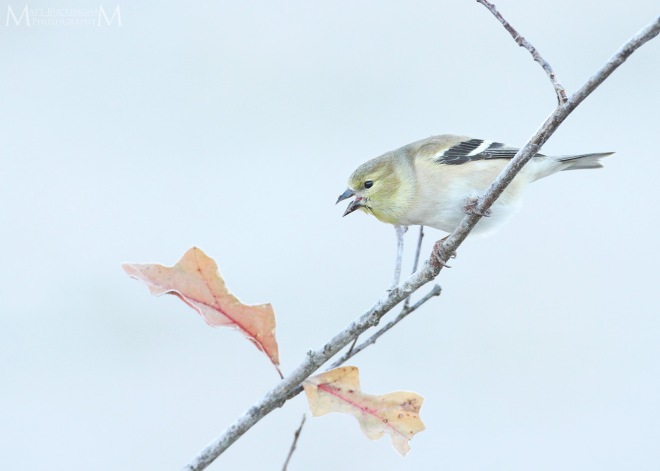 I shot this Great Egret (Ardea alba) at a local park.  I couldn’t believe how far away from this bird I had to be to get the entire animal in the frame.  And even at a distance, the level of detail that the 600mm captures is astonishing.

Back at James’s farm we spend some time strolling through the woods in search of resident and wintering birds.  Though they are common, I have always wanted to capture a good image of a Blue Jay (Cyanocitta cristata).  I think they are beautiful, and they are iconic woodland birds.  I captured this one as it called from a branch that was swaying in the breeze.  Utilizing high speed continuous shooting, I was able to catch it as the branched swayed away from the twig in the foreground, providing a clear shot at the bird.

I’m quite fond of this shot of a Tufted Titmouse (Baeolophus bicolor), another familiar bird of the eastern United States.

This Chipping Sparrow (Spizella passerina) was one of a large group foraging on seed near James’s cabin.

As we were wandering through the woods we saw and heard a Hermit Thrush (Catharus guttatus) foraging in the underbrush.  We found a spot to conceal ourselves as best we could and waited for over an hour while the bird teased us by flitting back and forth through dense vegetation before us.  Unable to get a clear shot, we were about ready to give up when it hopped out onto a large vine in the open.  Remarkably it sat still on this perch long enough for both James and I to take several shots.  See one of James’s photos here.

While we were busy photographing the songbirds, we heard a haunting call ring out above us.  It was a Barred Owl (Strix varia).  We came to realize that there was a pair in the treetops around us.  I struggled to get a clear shot until one of the owls flew and provided me a relatively unobstructed view. 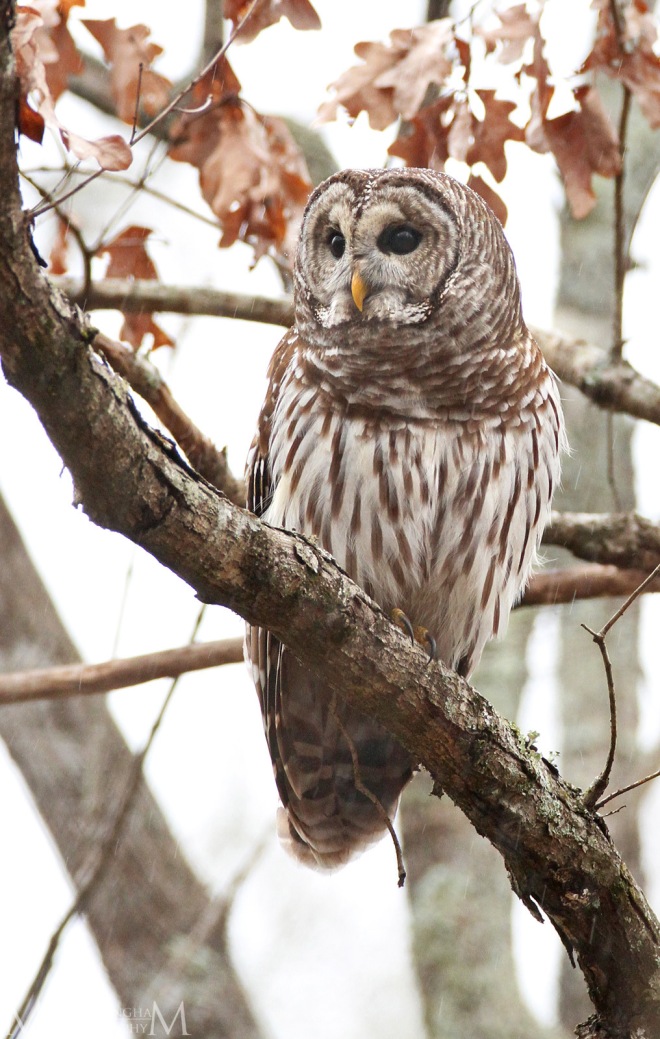 Carolina and I are lucky to have friends like James and Erin Childress.  I know that James will make good use of his new lens, and look forward to spending many more hours with him in the field capturing images of the natural world we both love so much.