One perfect spring day, Carolina came to me and said that she wanted to go looking for dogwoods.  She had a spot in mind, near the western edge of the Pineywoods.  My response, unsurprisingly, was an eager “let’s go!”.  So we set out into the woods, and what we found was a beautiful spring paradise beyond anything I could have expected.  Seeing Flowering Dogwood, with its blossom laden branches painting the forest understory in white, is reward enough for a day’s wanderings.  But the dogwoods were just a precursor to the botanical, entomological, and mycological treasures to be discovered.

Deep in the forest we came across a gentle slope in the mesic floodplain of a small stream.  My attention was immediately captured by a sea of Mayapple (Podophyllum peltatum) leaves.  Scattered Golden Groundsel (Packera obovata) blooms rose from beneath the surface, adding a splash of yellow to the forest floor.  It was a beautiful scene for certain. 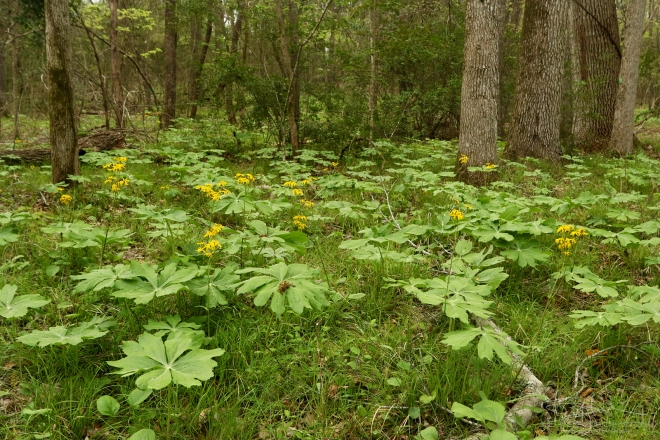 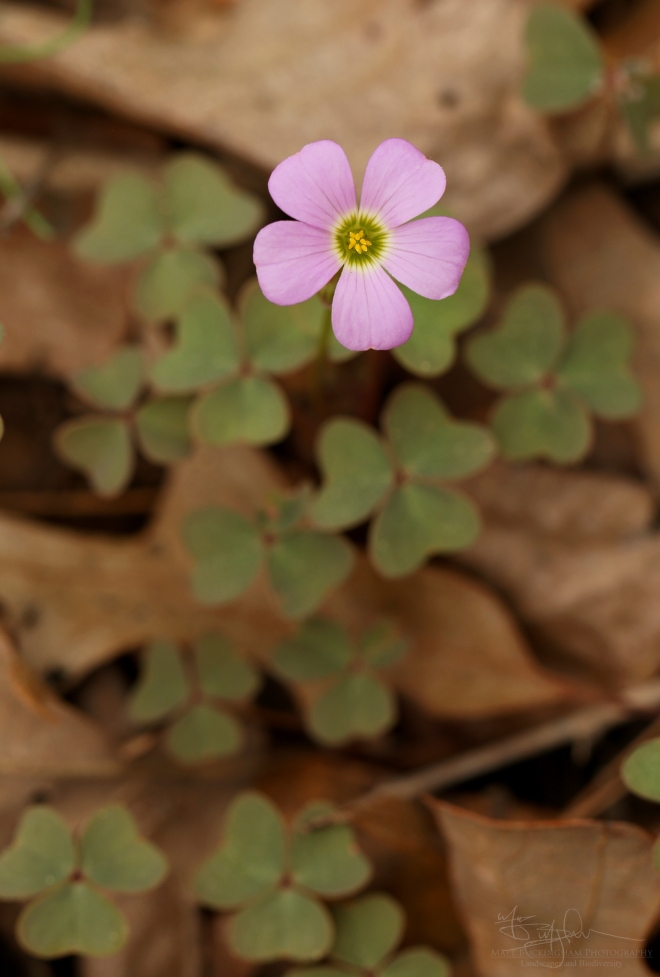 On the slopes drier upper reaches I encountered a couple of species that are much more common further west, where chalky, calcium rich soils are more common.  There were several Prairie Celestials (Nemastylis geminimflora) blooming alongside Nuttall’s Death Camas, which was still in tight bud.

Though it superficially resemble a lily, and is often called the “Celestial Lily”, Nemastylis geminiflora is, in fact, a member of the Iris family.  They thrive on calcium rich soils, and as the soils of the Pineywoods are generally acidic, they are seldom encountered here.  Finding them alongside the calciphilic Toxicoscordion nuttallii, communicated to me that we were dealing with a calcareous forest, and that other interesting things were likely near. 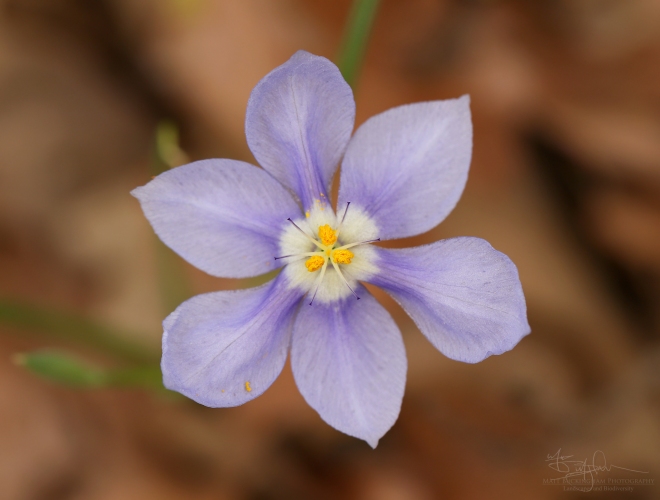 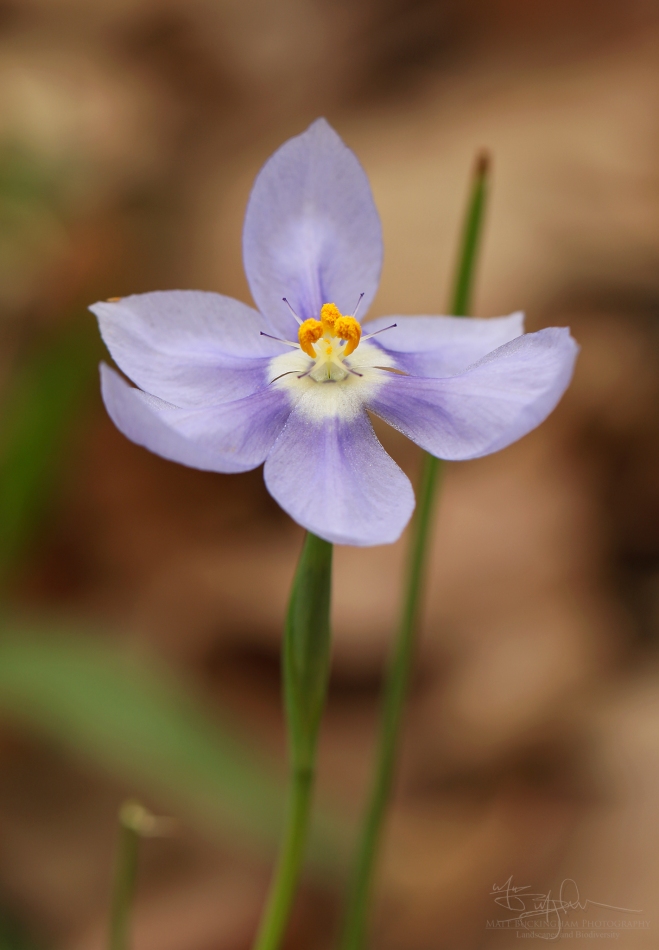 While I was admiring some blooming thing, Caro called out that she had found what is, in my opinion, a serious contender for the most beautiful animal in the country: the Luna Moth (Actias luna).  Seeing one of these massive silkworm moths in the wild is an experience not easily forgotten, and each encounter leaves me awestruck.  This striking male had clearly just emerged from its pupa, where it overwintered hidden among the leaf litter at the base of a large shortleaf pine.

It was a male, as evidenced by its large, feathery antennae.  It was no doubt awaiting nightfall, when it would take to the air in search of a female’s pheromone trail.  The females advertise their location using these chemical cues, and males will fly all night to find them.  It seems a tragic tale, as both sexes are born without feeding mouth parts, and live only for a week or so.  Their only purpose is to find a mate so that they may parent the next generation of Luna Moths.

When I had my lens trained on a different flower, Carolina called out that she had found an interesting fungus.  And she had.  I had heard that the elusive holy grail of fungi could be found in East Texas, but in nearly two decades of wandering I had never seen one.  That all changed this day.  Caro had found a Pineywoods morel.  More specifically, a Yellow Morel (Morchella esculenta).

Morels may be THE most sought after wild edible in the country.  Though common in some areas, they seem quite scarce in East Texas.  I had long dreamed of finding and photographing one, but the possibility hadn’t crossed my mind as we set out that morning.  These mushrooms are renowned for their rich flavor, and there is no way of knowing how many thousands of pounds are harvested each year.  It is said that this harvest is not harmful to the plant, as only the above ground reproductive structure of the organism is removed.  This is true in a sense, however removing them prior to the release of spores can still impact local populations.  Due to their unique beauty and scarcity in the region, I could not bring myself to pick any, and after capturing their likeness , I left them to the forest.

After returning from an incredible day, Caro drafted a narrative of the mushrooms’ discovery which sums up a common interaction in such situations.  I share it here, as a tribute to one perfect spring day.

Loving the idea of helping him because it means he needs me I always keep my eyes wide open to any opportunity. I have good sight, but those were hard to recognize because they look similar to the leaves on the ground. Suddenly, I could recognize them; they were those fungi that he loves. I start to talk to him, well, interrupting him from the shooting. Like any other husband in this world, he starts to sound interrupted and makes noises right before the question: what is it?! After, breaking the special connection man-plant I could explain myself, but still wife-annoyed and mumbling secret words to the universe he knelt and asked again: what is it? But this time with a resigning attitude and makes an effort to not rise the voice, so I couldn’t detect the obvious and by using husband-diplomacy; he said “what?”. It took me a moment to make him understand what I was talking about and even longer to show the respective subjects. Then, he jumped and started to claim this species was something he always wanted to see and take photos, so the mystic connection moment restarted again.