One of the Gulf Coastal Plain’s major centers of endemism occurs in the Pineywoods of East Texas and western Louisiana, and to a lesser extent southeast Oklahoma and southwest Arkansas.  Many of these species are concentrated in the xeric sandhills and longleaf pine savannahs of the region.  The Gulf Blazing Star (Liatris tenuis) is one such species.  It primarily occurs in longleaf pine savannahs, sandhills, and sandstone barrens.

Members of the genus Liatris can be difficult to differentiate.  Two similar species, Liatris squarrosa and Liatris squarrulosa can occur in similar areas.  L. tenuis is best identified by its narrow leaves, few florets per head, and short involucre.

One possible explanation for the high levels of endemism in the longleaf pine and xeric sandhill communities is a break in the range of longleaf pine and bands of geological formations with deep sand deposits created by the Mississippi River Delta.  This has created barriers to gene flow for species with very specific habitat requirements.  This isolation has led to the evolution of different lineages, resulting in speciation over time.

Another endemic of the West Gulf Coastal Plain that can often be found growing in close proximity to Liatris tenuis is the Scarlet Catchfly (Silene subciliata).  This aptly named catchfly blooms from mid summer through most of the fall.

Note the similarity of range between Silene subciliata and Liatris tenuis.  As mentioned before, this same pattern is shared by many of the Pineywoods’ plant species.  Silene subciliata occurs on deep sands in longleaf pine savannahs and xeric sandhills.

Both L. tenuis and S. subciliata are species of conservation concern in both Texas and Louisiana, where they are formally listed on the state’s rare plant lists.  Like so many species of the longleaf pine savannahs, their numbers of been reduced dramatically by loss of habitat and land use conversion.  Today they remain in only a handful of scattered populations.  Fortunately some of these have been protected by entities like the U.S. Forest Service, Big Thicket National Preserve, and the Nature Conservancy of Texas. 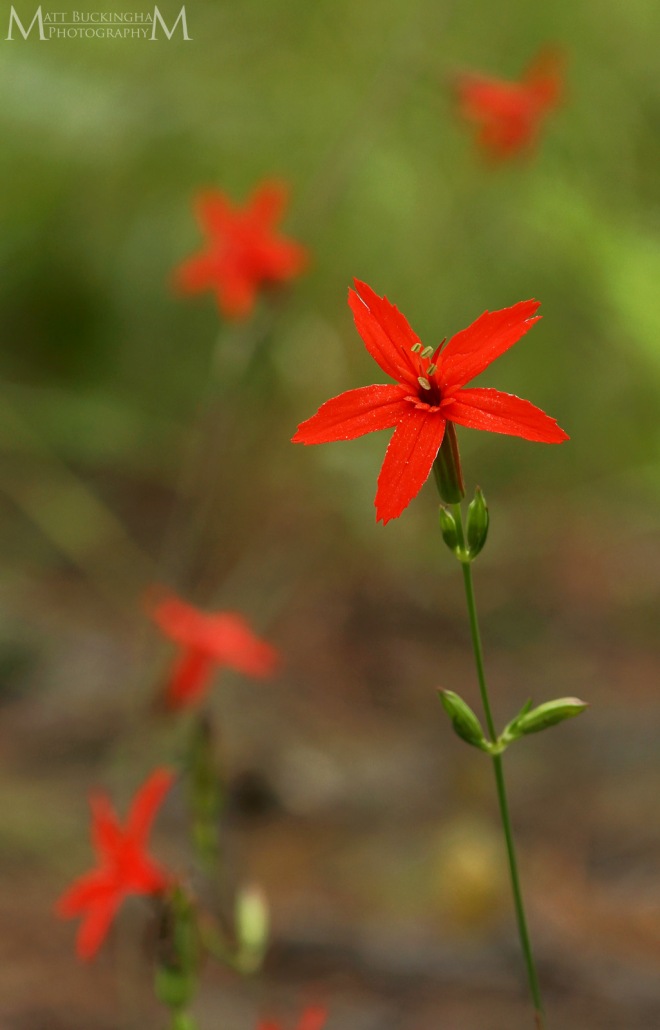