In the absence of rain, this place may seem some endless sea of stone, only occasionally broken by scattered shrubs, cacti, or other thorny things.  In the hottest and driest of times it is easy to think that life shuns this place.  But such thoughts could not be farther from the truth.  The Chihuahuan Desert in the Big Bend region is one of the most biodiverse arid places on the planet.  Perhaps there is no better time to witness this biodiversity than early spring following a wet fall and winter.  Fueled by life-bringing moisture, countless billions of seeds germinate and send up a staggering array of flowers from the parched soil.  Perennial species, including cactus, also react to the increased moisture by concentrating energy into blooming en masse, painting the desert in a rainbow of colors, and shattering its stereotype as a barren wasteland.

After an incredible day exploring Black Gap, Caro and I set out early to Big Bend National Park in order to avoid the spring break crowds.  We arrived at the Panther Junction visitor center right as it opened so that we could explore the book store and refill some of our water bottles.  Within 30 minutes, the place was overrun with a variety of characters, all from different walks of life, seeking different experiences, yet united in their admiration for this incredible place.

Wanting to avoid the bulk of the crowds, we opted to explore some remote 4X4 roads, which would offer ample opportunities to explore a variety of habitats.  It was a good choice, and aside from a few vehicles before lunch, we had countless acres of wilderness to ourselves.

As the day began, we stopped to admire an explosive bloom of Bicolored Mustered (Nerisyrenia camporum) in the dry bed of Tornillo Creek.  The blooms are strongly fragrant and filled the spring air with their sweet aroma.

In areas adjacent to the creek we found the mustard blooming alongside some towering Big Bend Bluebonnets (Lupinus havardii) and a variety of other wildflowers, offering a varied sampling of the palette that the desert was soon to provide.

Spring in the Desert

We had seen our fair share of Big Bend Bluebonnets in Black Gap, but Big Bend provided a whole new perspective to this striking plant.  The sky was overcast all day, providing a soft light that made landscape photography a challenge, but provided excellent opportunities to capture intimate portraits of many of the incredible wildflowers that we encountered.  Some of the bluebonnets we encountered were approaching four feet in height, and sported racemes bearing dozens of flowers. 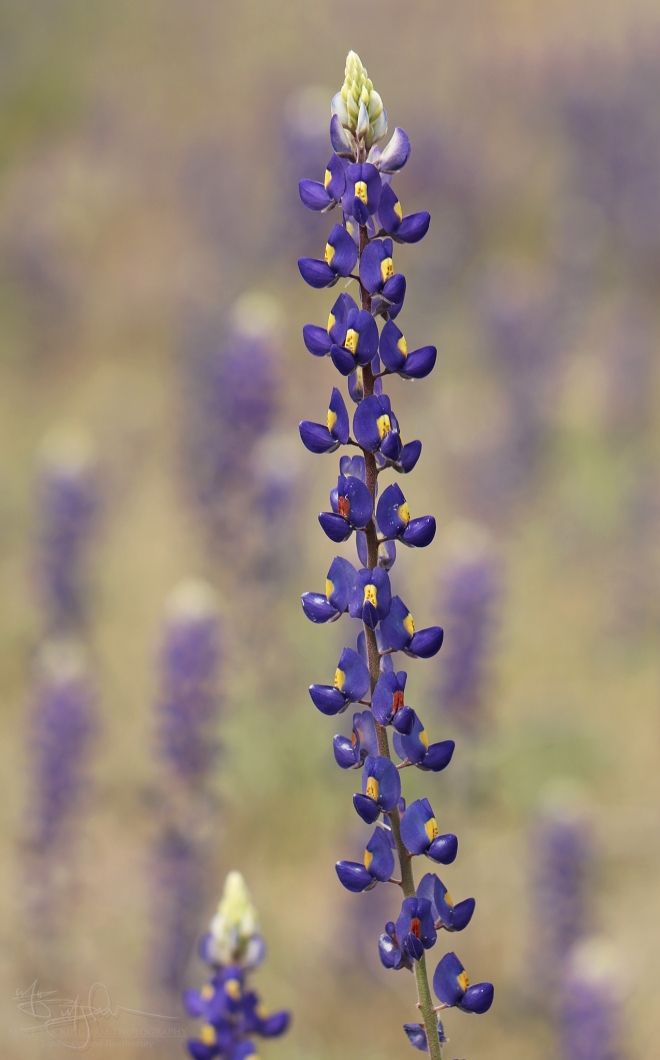 While passing adjacent to a series of gypsic hills, Carolina shouted for me to stop.  This is usually a good thing, and means that she has spotted something interesting.  And indeed she had.  She pointed to bright yellow spot on a hillside hundreds of meters away.  How she spots these things, I’ll never know.  Moving closer to investigate, it soon became evident that it was a healthy Texas Rainbow Cactus (Echinocereus dasyacanthus).  This is a species that I included in my list of biodiversity goals.  I have seen the plant many times, but had never experienced the splendor of its blooms.  I was concerned that we were too early, but I was very wrong.  We would find many plants in full, glorious bloom in the lower elevations of the park.

I had always presumed these cacti had a preference for limestone, but we saw them in a variety of substrates throughout the day.  They have some of the most striking blooms of any cactus.  They are generally lemon yellow with green throats, and may approach 4 inches across.

Interestingly, their common name is not derived from their stunning flowers, but rather the rusty-colored bands decorating their stems.  Seeing many old, multi-stemmed individuals in such a remote setting was certainly one of the highlights of the trip. 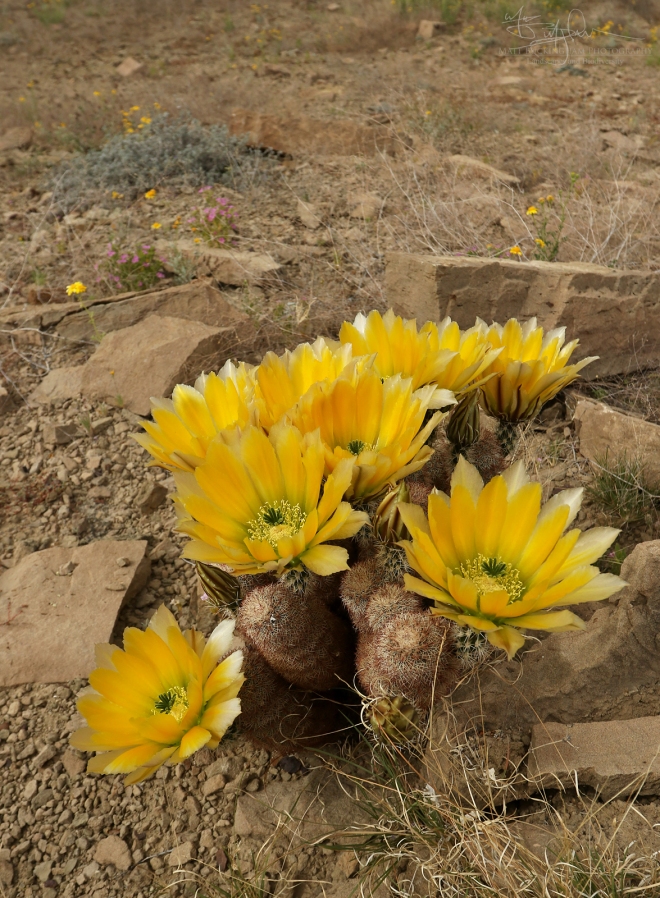 A few of the plants contained Cactus Bees (Diadasia sp.) feeding on nectar from deep within the blooms.  The bees’ hairy exoskeleton served as the perfect vessel for trapping pollen, ensuring that the insects would play their part in propagating future generations of Texas Rainbow Cactus. 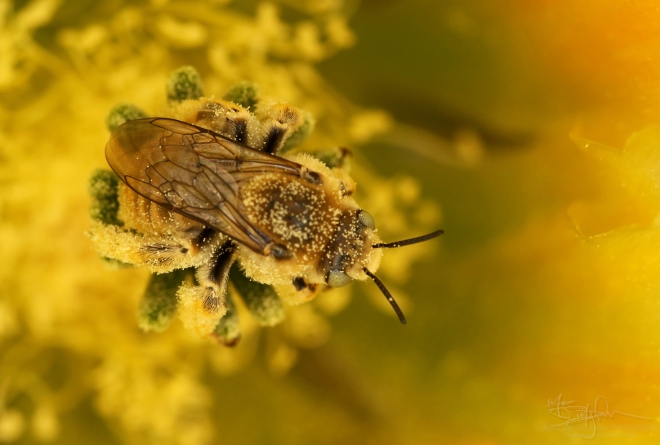 There were other species of cactus in bloom as well.  Perhaps the most conspicuous were the large colonies of Purple Prickly Pears (Opuntia azurea), which were just coming into flower.  The blooms of most cactus species open in late morning or early afternoon, and close by late afternoon.  It was a wonderful thing to see these prickly pear flowers open to reveal their bright red centers to the world. 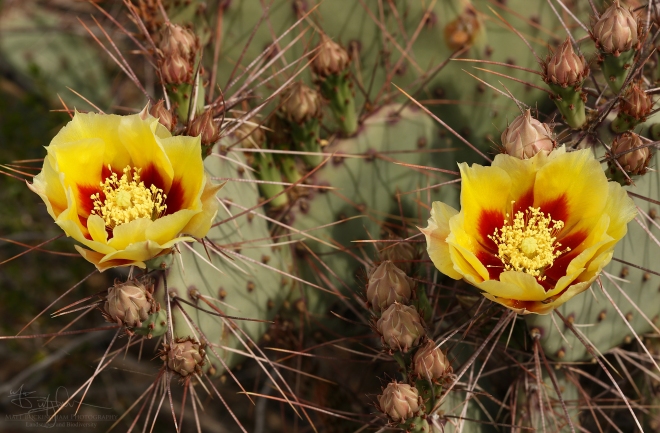 While it was easy to get lost in the grandeur of endless expanses of blooming wildflowers, pausing to admire more subtle, intimate scenes proved just as rewarding.  I photographed the Edward’s Hole-in-the-Sand Plant (Nicolletia edwardsii) and Sand Bells (Nama hispidum) just after the latter’s flowers opened for the day.

The combination of wildflowers was endless.  Below Pope’s Phacelia (Phacelia popei) can be seen blooming alongside Bicolored Mustard along an ephemeral drainage.

Pope’s Phacelia and Bicolored Mustard bloom along an ephemeral drainage.

The kaleidoscope of colors continued in this rocky wash, where I spotted several nice clumps of Havard’s Fiddleleaf (Nama havardii), known in the United States only from the Big Bend region. 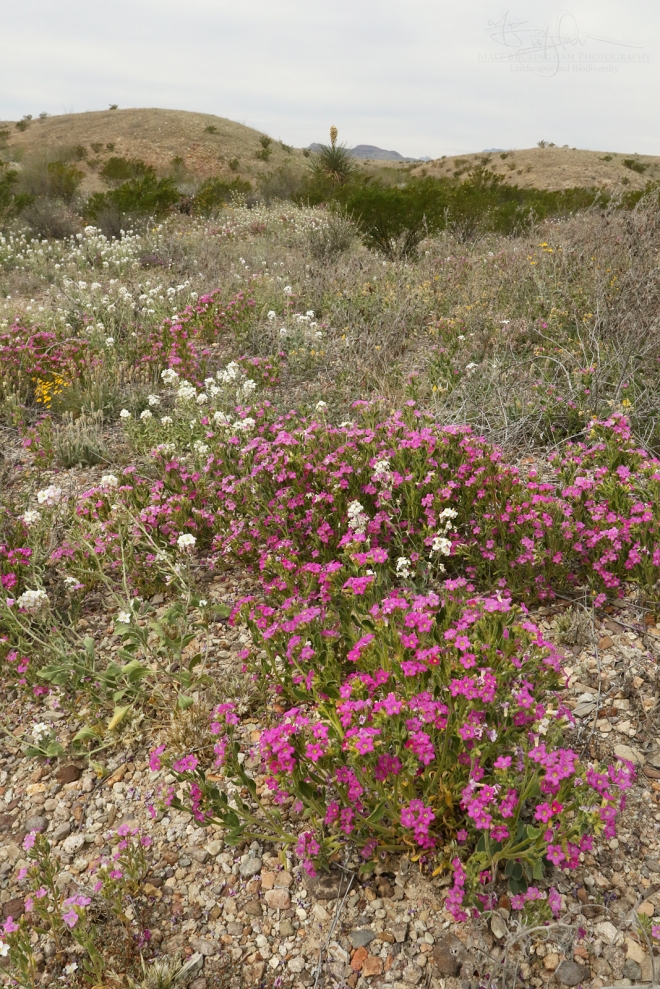 Havard’s Fiddleleaf and Bicolored Mustard bloom in a gravelly wash.

It seemed like around every bend in the road there was some new fusion of color to be discovered.  One of my favorites was the combination of the yellows of Desert Marigold (Baileya multiradiata) and the purples of Nama hispidum blooming among scattered Ocotillo and Creosote Bush. 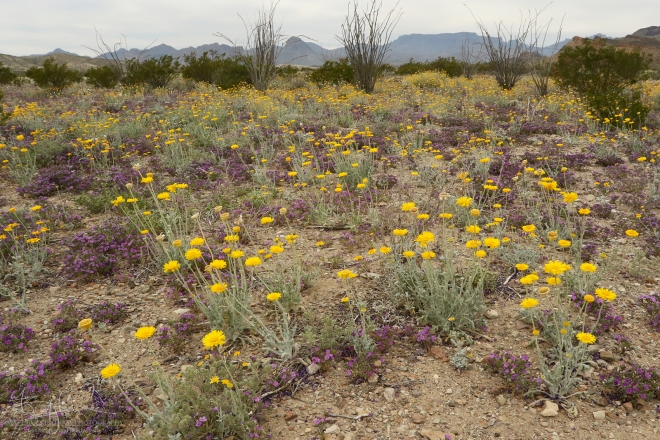 Deep in the interior of the park, we explored a series of limestone ridges and shale slopes on hills rising from the Rio Grande.  Here we found many interesting, uncommon species like the Lyreleaf Jewelflower (Streptanthus carinatus).  This denizen of the desert southwest bares purplish blooms in Texas, but they are primarily white and yellow as one moves further west in their range.

We found several Candelilla (Euphorbia antisyphilitica) plants growing in the same general area.  This interesting succulent has a long history of use by human cultures.  As the specific epithet suggests, it was long used to treat sexually-transmitted diseases.  It has also been extensively harvested for a wax produced from its leaves.  This wax has been used for a variety of applications, including use as a food additive for glazing agents, as an ingredient in lip balm, and perhaps most famously as a binder for chewing gum. 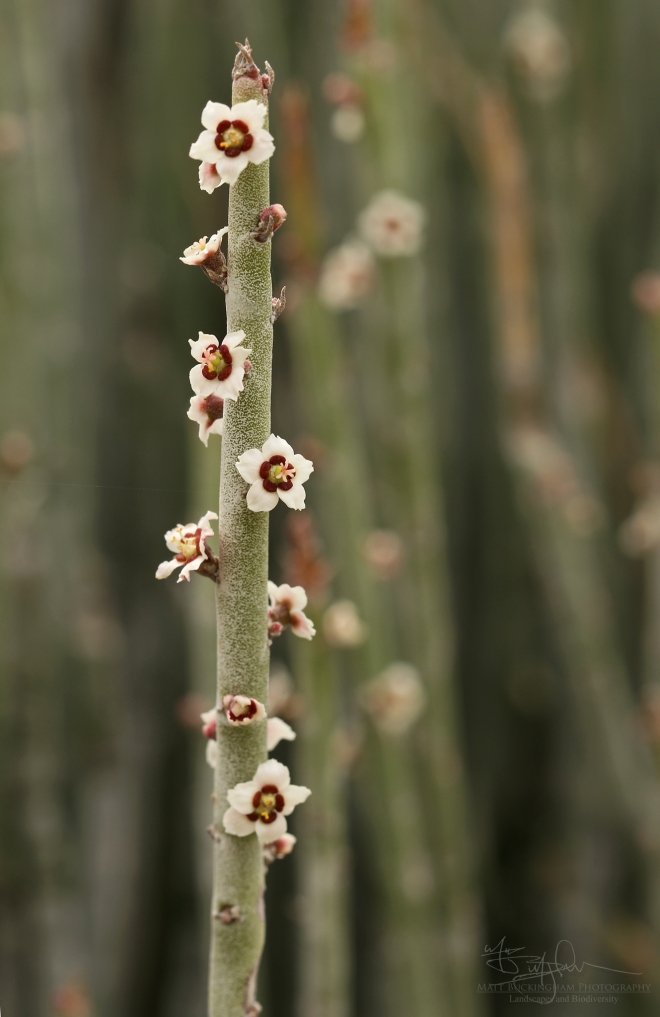 On one of the limestone slopes Caro spotted a beautiful Texas Rainbow Cactus that sported bright orange flowers as opposed to the more typical lemon colored blooms.  We saw a few of this color, and even a few with a pinkish tinge. 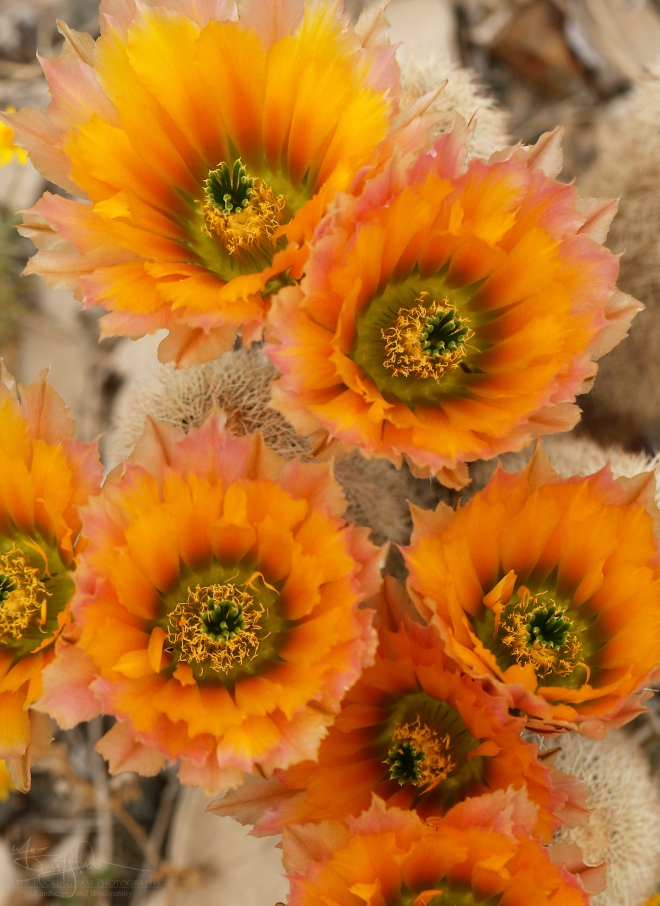 Caro’s sharp eyes also spotted the diminutive Duncan’s Foxtail Cactus (Escobaria duncanii), a rare cactus is primarily confined to a very narrow range near the Rio Grande in Big Bend and adjacent Mexico, though there is an isolated population in New Mexico.  This cryptic cactus grows from fissures and crevices in the limestone and is one of the first cacti to bloom in spring.  By our visit in early March, many of the blooms were already spent. 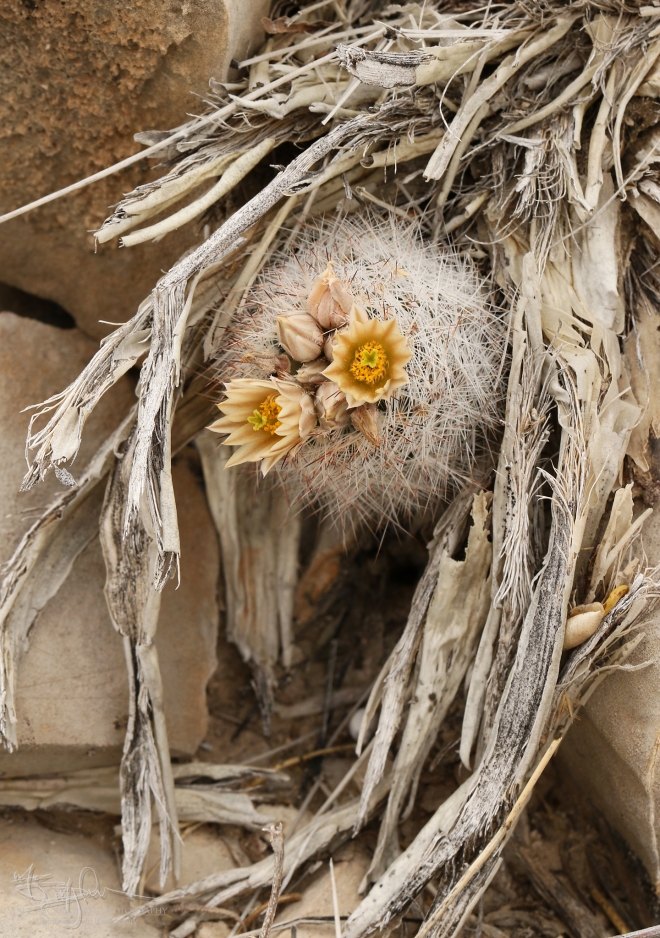 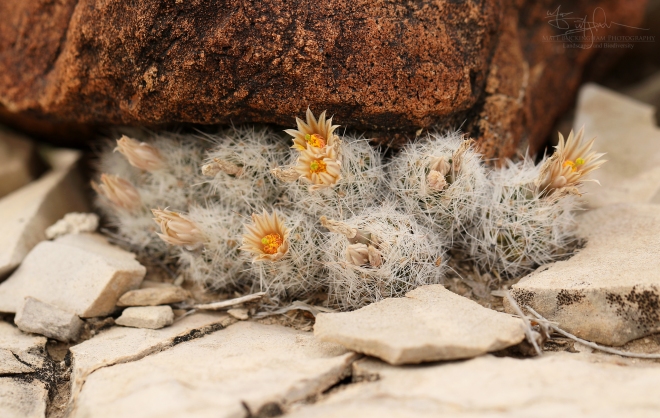 Another cactus I had really hoped to see was Warnock’s Pineapple Cactus (Echinomastus warnockii), named for the famous botanist and pioneer of the flora of the Trans-Pecos, Barton Warnock.  We actually saw several with closed blooms in the early afternoon, however this species opens later than most and we couldn’t wait around.  Fortunately Caro spotted one growing in a clump of dried grass on one of the limestone slopes a couple hours later.  Like many cacti of the region, E. warnockii is known only from West Texas and adjacent Mexico.

Those limestone hills were full of a diversity of cactus!  Caro spotted another rare, early-blooming species, the Silver-Lace Cob Cactus (Escobaria albicolumnaria).  Consider by some to be a variety of Escobaria sneedii.  When investigating the cacti of Texas, one notices a pattern: many species are confined only to the Big Bend region.  In fact, this (relatively) small area in West Texas has the highest diversity of Texas in the United States.  E. albicolumnaria is another early bloomer, and sports pink flowers that never open fully. 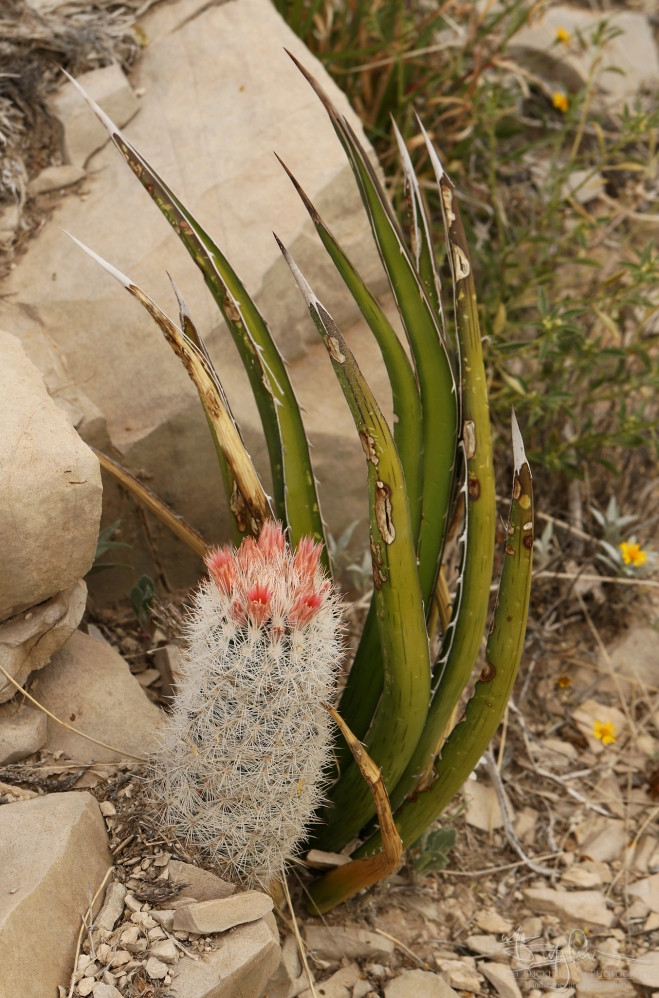 Throughout the day we had seen several clumps of Big Bend Prickly Pear (Grusonia aggeria), another species whose U.S. range is confined to far West Texas.  A type of “dog cholla”, this cactus sports very sharp, strong spines that can become the bane of any desert wanderer.  Fortunately the bright yellow blooms make up for their pricklier side.

As the day neared its end we found some clumps of Purple Prickly Pear loaded with blooms and developing buds.  Their beauty combined with that of a carpet of composites and Nama, and the Chisos Mountains as a backdrop created a dramatic scene that I felt privileged to witness.

Throughout the day we saw several blister beetles (Cysteodemus wislizeni) scurrying across the desert floor.  These chunky, iridescent beetles are flightless, and their elytra (outer wings) are partially fused.  They were constantly in motion, providing a challenge to photography, but it was a challenge I welcomed as I chased after them, camera in hand, uttering colorful phrases in my frustration. 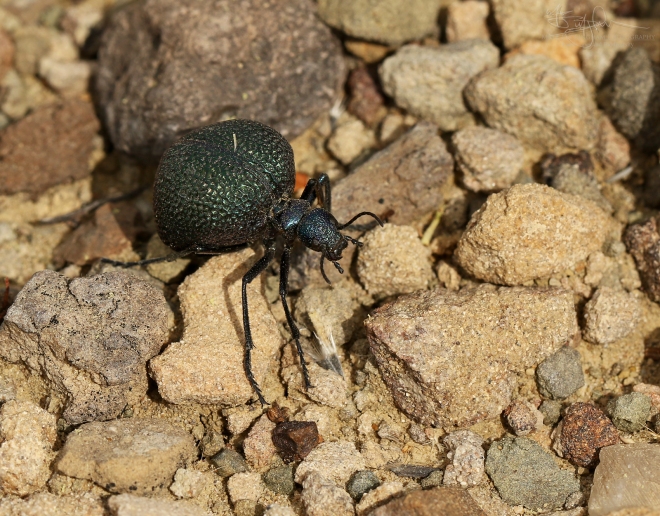 While I was busily tending to the beetles, Caro came rushing over to me with her hands cupped one over the other.  What she revealed was a large grasshopper, which I believe to be a female Toad Lubber (Phrynotettix robustus).  I placed it adjacent to a few plants of the diminutive Matted Fiddleleaf (Nama torynophyllum).

A Glimpse of the Desert Floor

As afternoon turned to evening we once again found ourselves among the overwhelming beauty of vast expanses of Big Bend Bluebonnet.  For the briefest of moments the sun broke through the wall of clouds, and illuminated the bluebonnet laden slopes and distant Chisos Mountains.

Land of the Blue

As the light began to fade I thought back on one of the most incredible days I had spent in the desert.  Just as I was expecting photography to wind down, I caught a flash of pink in a sandy desert wash.  It was a species that I had very much hoped to find: Havard’s Ipomopsis (Ipomopsis havardii), another generally uncommon species unique to the region.  I quickly went about photographing it, as daylight was fading fast. 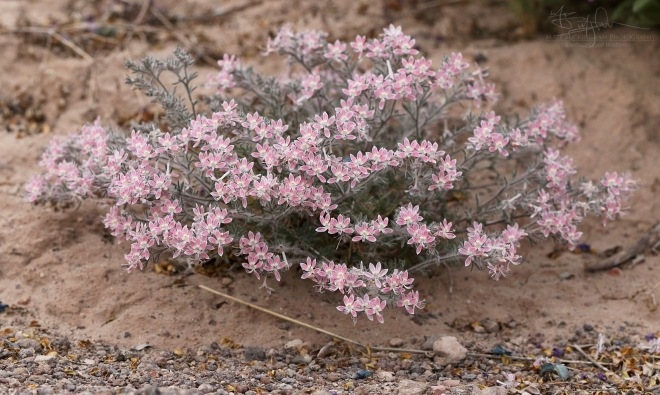 Though they are small, the colorful blooms are among the most interesting that I have seen. 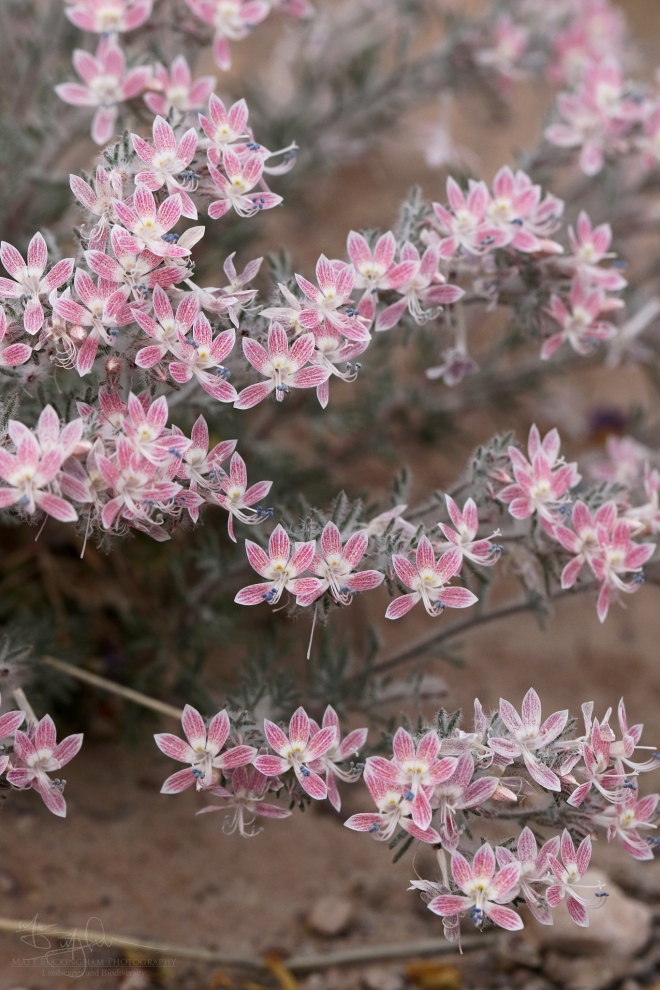 As I finished photographing the Havard’s Ipompsis, the light faded fast.  We spent last light driving through an expanse of volcanic tough that looked like some alien landscape.  As darkness set in we still had 10 miles until we would reach pavement.  It was an eerie feeling driving through some of that terrain in total darkness.  The eeriness did not diminish after we returned to pavement.  Shortly after doing so we pulled into a parking area to stretch our legs.  Immediately after leaving the truck we heard a pair of Coyotes sounding off.  Now I have spent many evenings being serenaded by the mournful calls of “God’s Dog”, and they often deceive one into thinking they are much closer than they actually are.  But these were CLOSE.  Caro suggested that I turn on the headlights, and as I did we could see the pair just at the edge of the beam’s reach.  They trotted across the road and continued into the vast desert beyond.

The experience rounded out a most spectacular day.  I leave you with a parting shot, of a splendid Texas Rainbow Cactus in all its glory, thriving in the desert flats below the venerable Chisos Mountains. 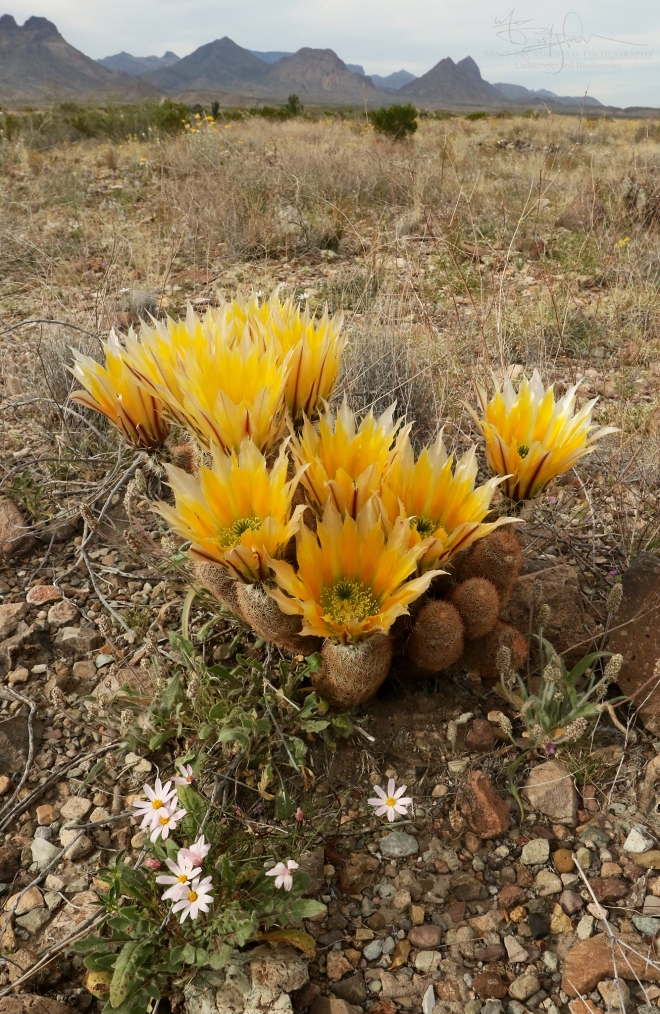