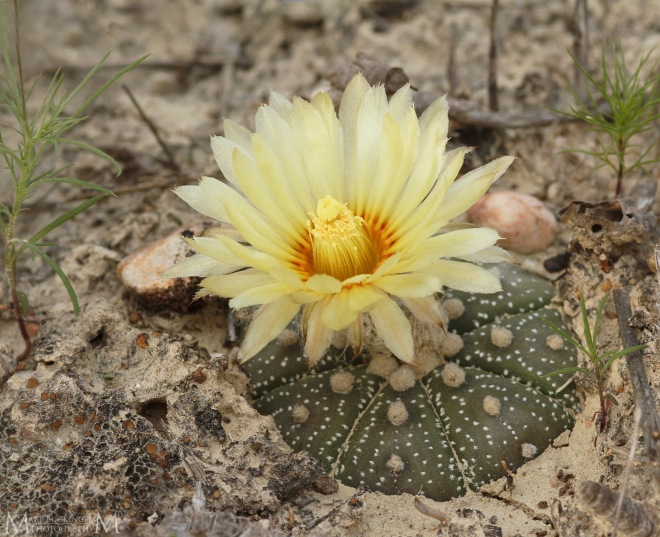 It was of the utmost importance that we keep our eyes firmly fixed on the ground – scanning among the stones and parched earth.  Important, because we were in the realm of the Star Cactus (Astrophytum asterias), a very rare, Federally Endangered cactus of the Tamaulipan Thornscrub.  The plants themselves are often flush with the ground, look like little more than some stone or anomaly in the soil.  Their flowers, however, announce their presence to the world in spectacular fashion.  Carolina and I had looked for the Star Cactus in 2017 during a trip with my family.  While we found several plants, we did not have the good fortune to find them in bloom.  This year, however, would be different.

This year we were visiting with our good friends James and Erin Childress.  Having developed a search image during our previous trip, I began noticing a few plants scattered about.  My attention was soon diverted, however, when James and I spotted the brilliant magenta blooms of a group of Fitch’s Hedgehog Cactus.  It was in that moment, as we admired a very different cactus, that Carolina called out that she had found one in flower.  Barely able to contain my excitement, I rushed to her.  It soon become evident that we had timed this visit perfectly, as the floor of the Tamaulipan Thornscrub before me was decorated with dozens of bright yellow and orange blooms. 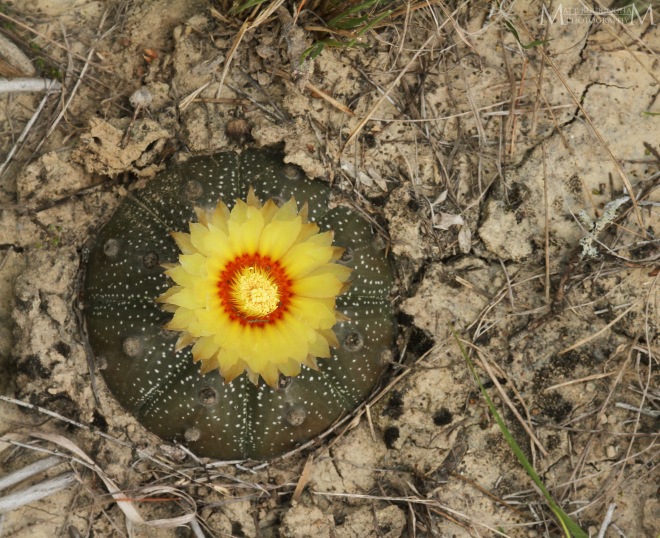 Though few known populations exist, where it does occur the Star Cactus can be quite abundant.  Today most of the state’s populations are protected and some are thriving.  We would be telling a very different story, however, if it weren’t for The Nature Conservancy in Texas.  Through the acquisition of land and partnerships with private landowners, The Nature Conservancy has ensured that Astrophytum asterias will not disappear from our state’s diverse flora.  In all, the Nature Conservancy through their Las Estrellas Conservation Cooperative has been able to protect over 2,500 acres of Star Cactus habitat, providing safe refuge for thousands of individuals.

Though it is promising, these successes do not mean that the Star Cactus does not still face threats to its existence.  While speaking with Sonia Najera, Grasslands Program Manager of the Nature Conservancy in Texas, she informed me that continued development adjacent to protected land is threatening A. asterias populations that have no protection.  A. asterias is also under threat from poachers who may collect plants for its popularity in cultivation, and for its resemblance to Peyote, which is extensively collected for its psychoactive properties. 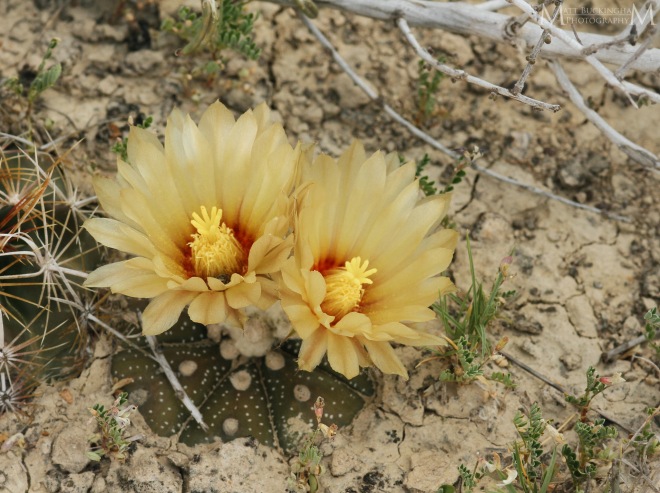 Despite the many threats that they face, I am optimistic for the future of the Star Cactus in Texas, thanks in large part to the Nature Conservancy and dedicated professionals like Sonia.

The day we spent among Las Estrellas in bloom was really the experience of a lifetime.  We observed and photographed so many spectacular plants in bloom that it was nearly impossible trying to narrow them down to decide what to post.  Below is a small selection of favorites from an unforgettable day in the field. 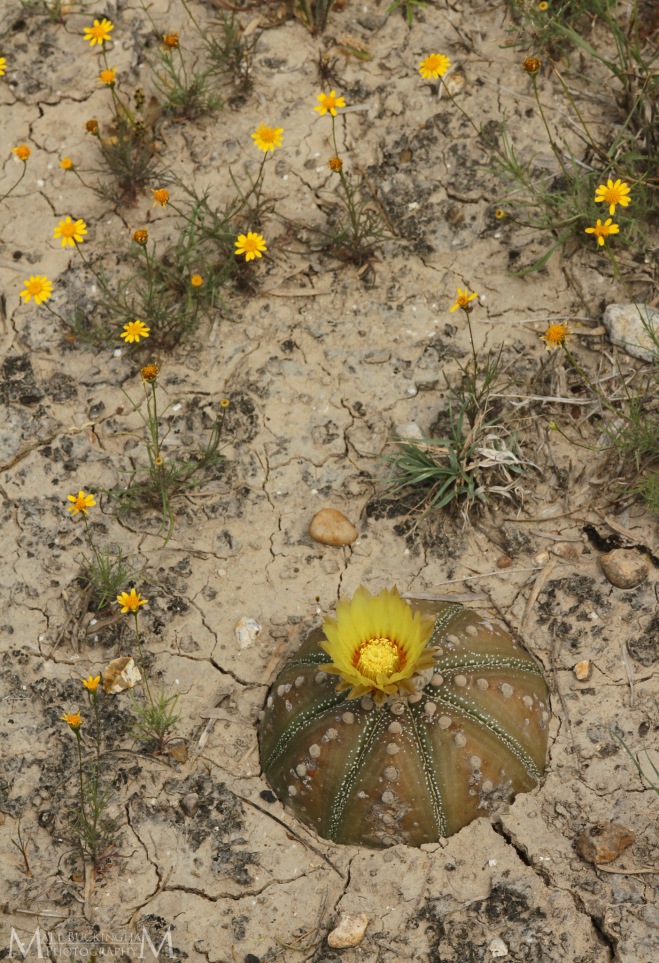 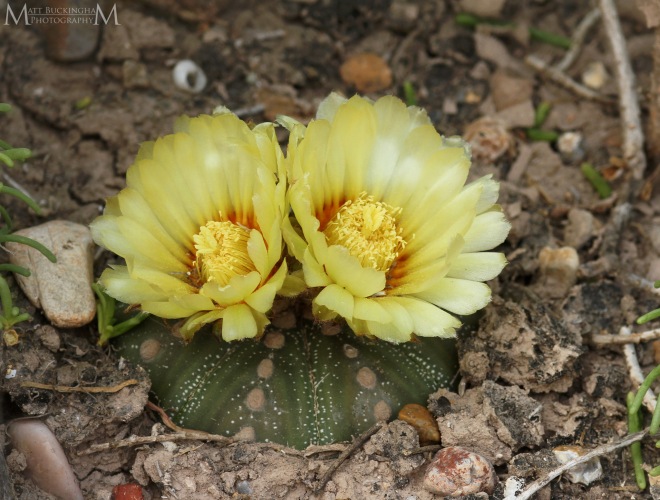 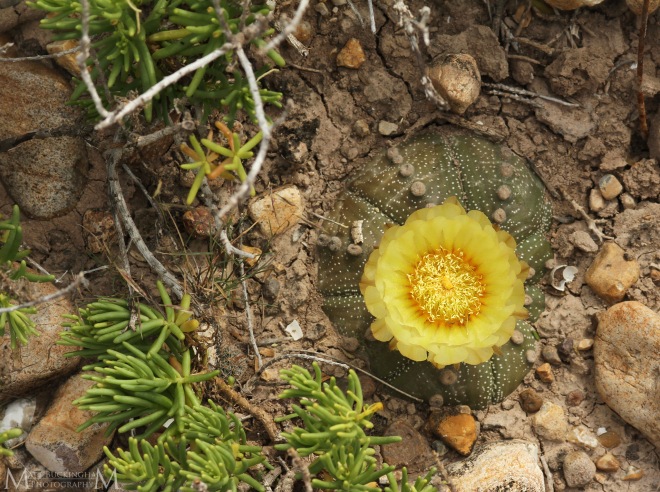 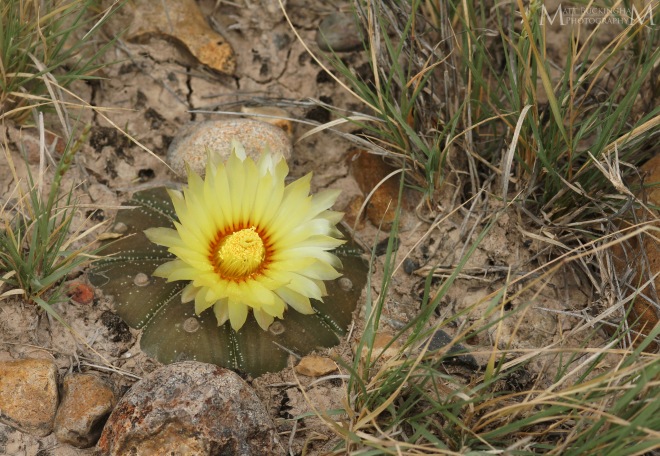 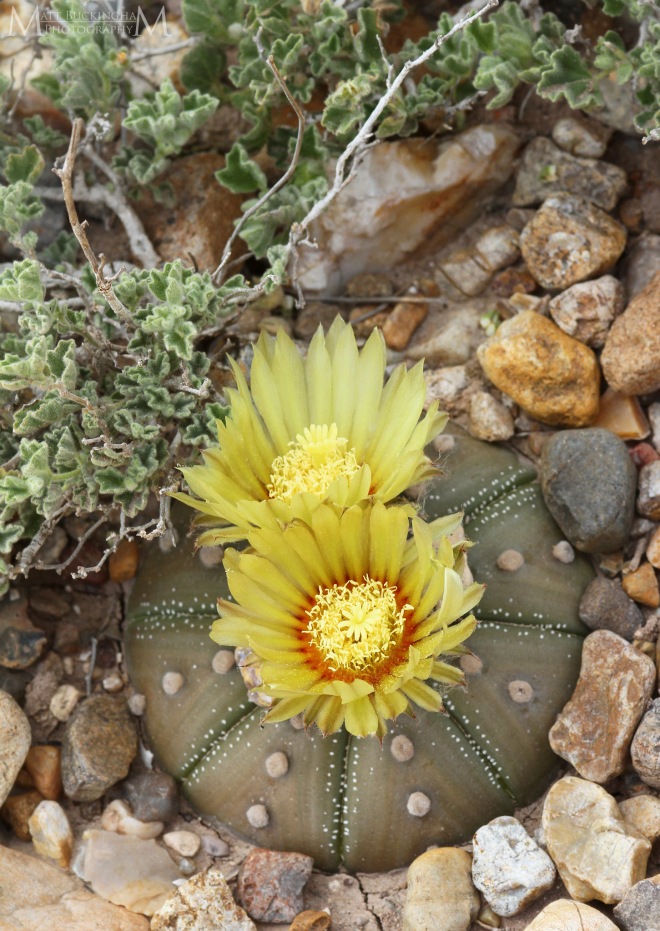 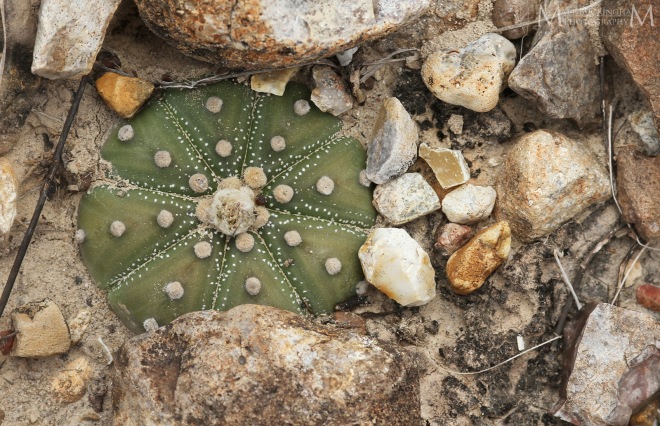 The Star Cactus (Astrophytum asterias) may be the rarest, most unique cactus in the country.  It is known from only a handful of sites in the Tamaulipan thornscrub of extreme southern Texas and northeastern Mexico.  It is so imperiled that it has been listed as Endangered by the U.S. Fish and Wildlife Service.  It is severely threatened by land use conversion and habitat loss.  Fortunately The Nature Conservancy in Texas acquired the property that may have the largest remaining Star Cactus population in the country.  Here they undertake conservation measures and reintroduction efforts to ensure that this iconic cactus remains for generations to come.

I have donated a number of photographs to The Nature Conservancy in the past.  When we decided on traveling to South Texas I reached out to them to see if I could arrange a visit to see and photograph these imperiled cacti.  They graciously approved my request, and we met with volunteer Paul Bryant, who gave us an excellent tour of the property.  Having previously worked for a non-profit land trust similar to the Nature Conservancy, I know how heavily we relied on our volunteers.  I also learned to recognize the good ones, and I had no doubt that Paul was a valuable asset to the Nature Conservancy. 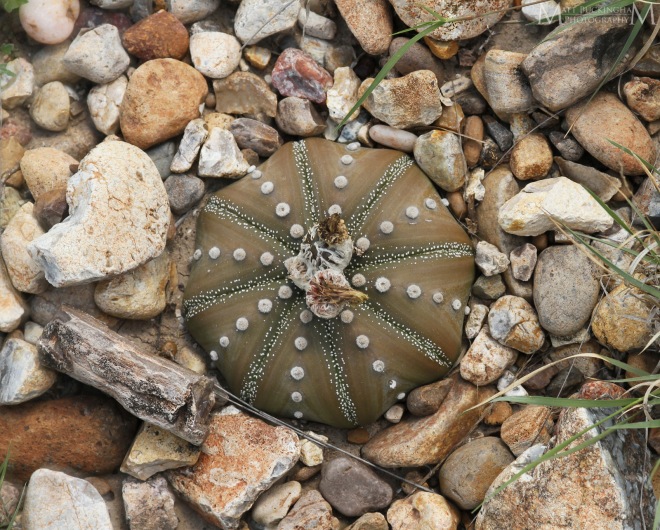 Though many were growing in the open, the star cactus was extremely difficult to spot.  When its not flowering, it is inconspicuous, blending in with the scattered rocks covering the gentle slopes where it grows.  Also known as the Sea Urchin Cactus, Sand Dollar Cactus, and False Peyote, it is a spineless cactus that lies relatively flat against the surface in times of drought.  Following rains, however it swells with water and can appear quite plump.  I had hoped to photograph the bright yellow blooms, but it was not to be.  We saw a number of plants that had recently blooms, and others that were preparing to, but we weren’t fortunate to catch any in the act.  That was ok though, it was a wonderful experience just to get to see them in their element.  The plant itself is beautiful, and made for some interesting photographs even without its bloom. 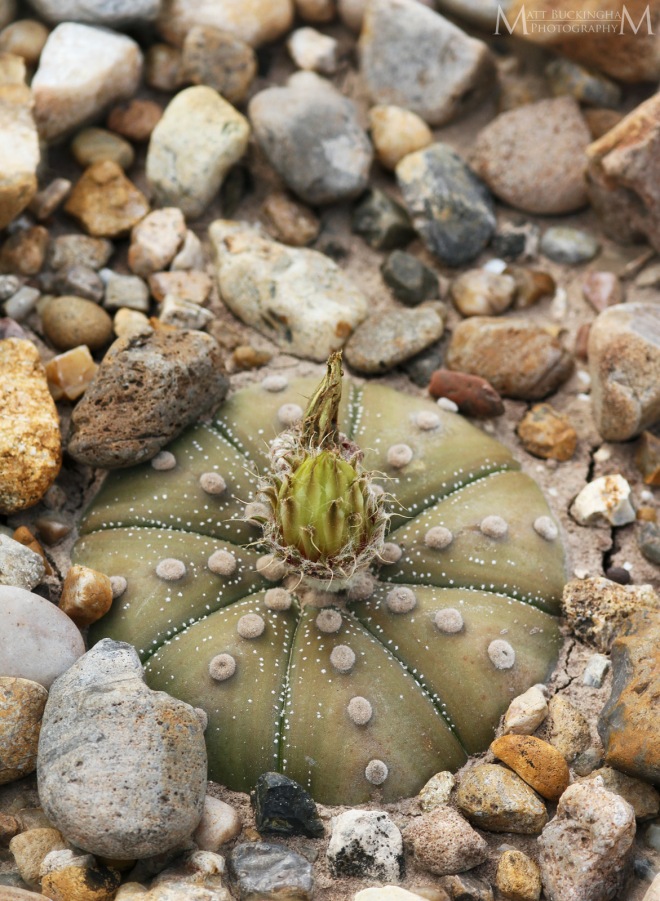 There were several other cacti growing in the vicinity of the Stars.  The most conspicuous was the aptly named Glory of Texas (Thelocactus bicolor).  In Texas this species only occurs in the extreme western and extreme southern portions of the state.  Though the populations are disjunct in Texas, they are more or less connected through Mexico.  We saw many of their bright pink blooms, both in the open and at the base of nurse plants. 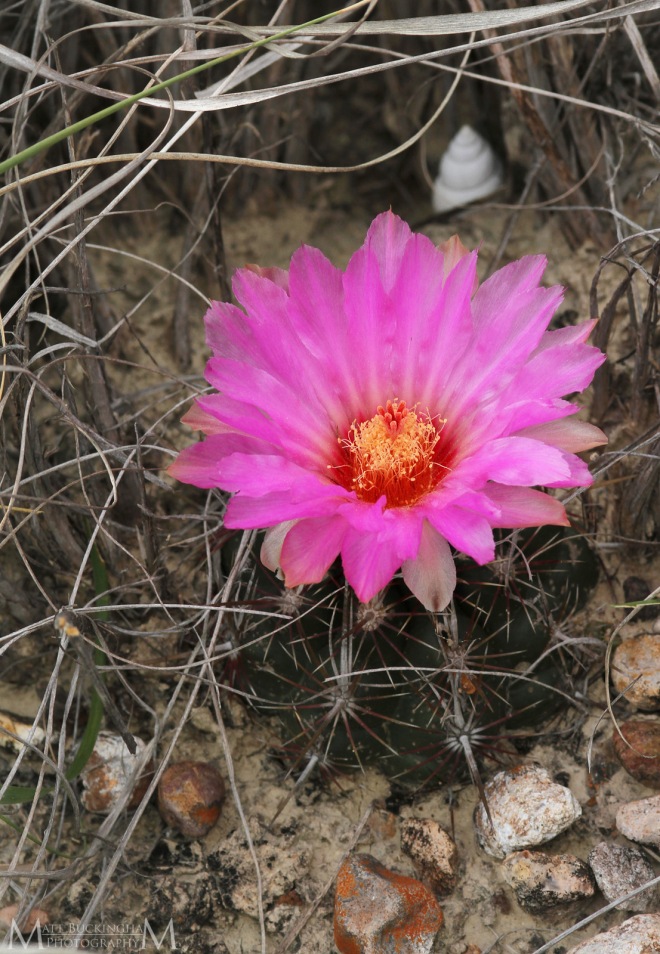 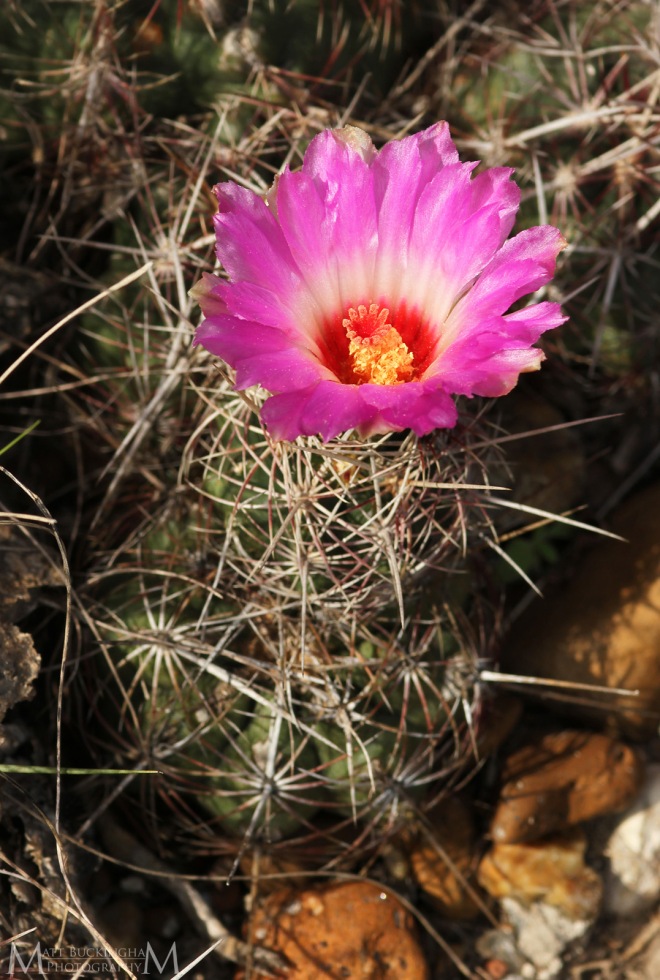 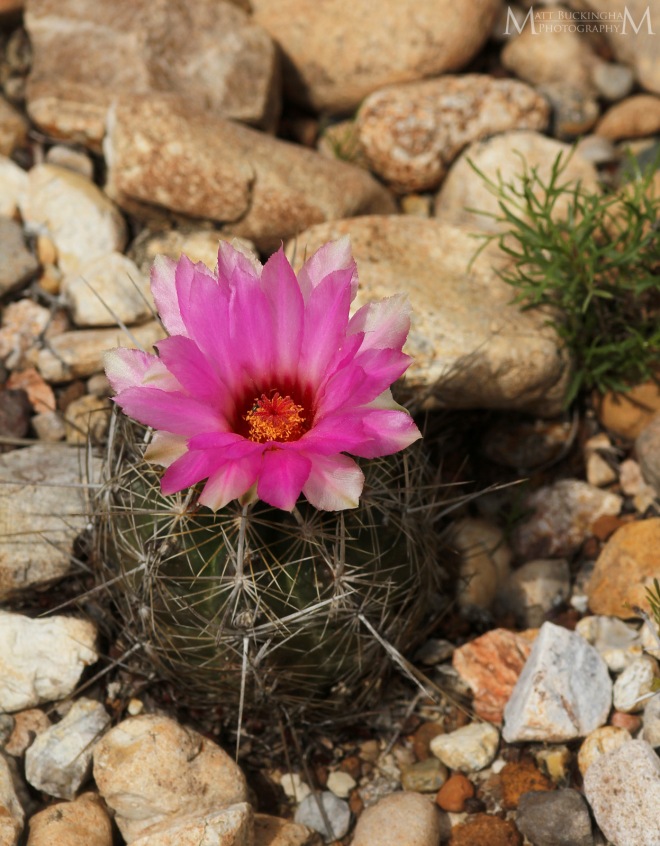 We also saw a few of the formidable Horse Cripplers (Echinocactus texensis) in bloom.  Looking at these beasts, its not hard to see how they got their name. 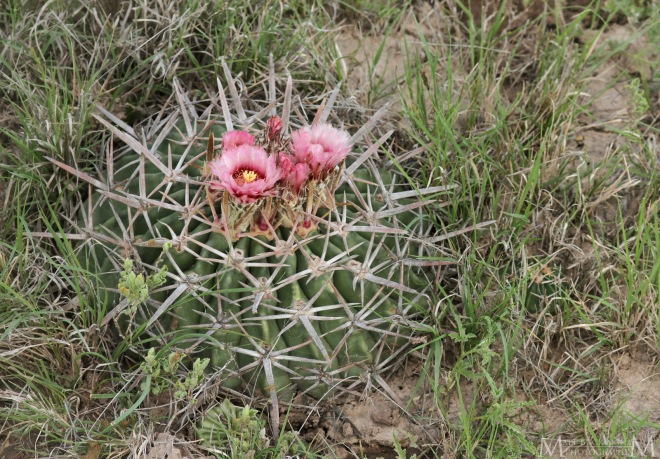 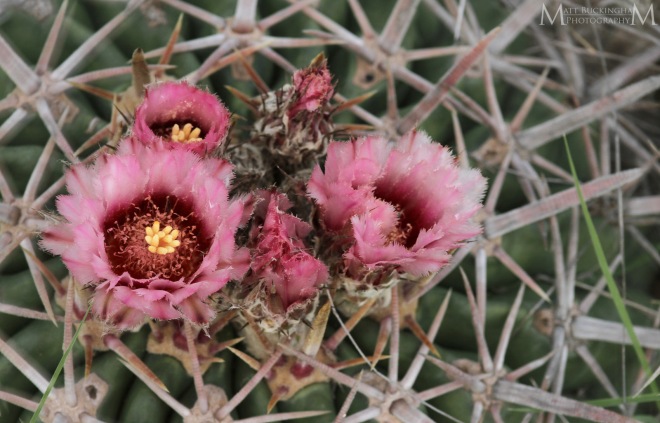 I only saw one Runyon’s Pincushion Cactus (Coryphantha pottsiana) in bloom.  Though not as scarce as the Star Cactus, this species is also rare in Texas, where it is known from only three counties along the Rio Grande. 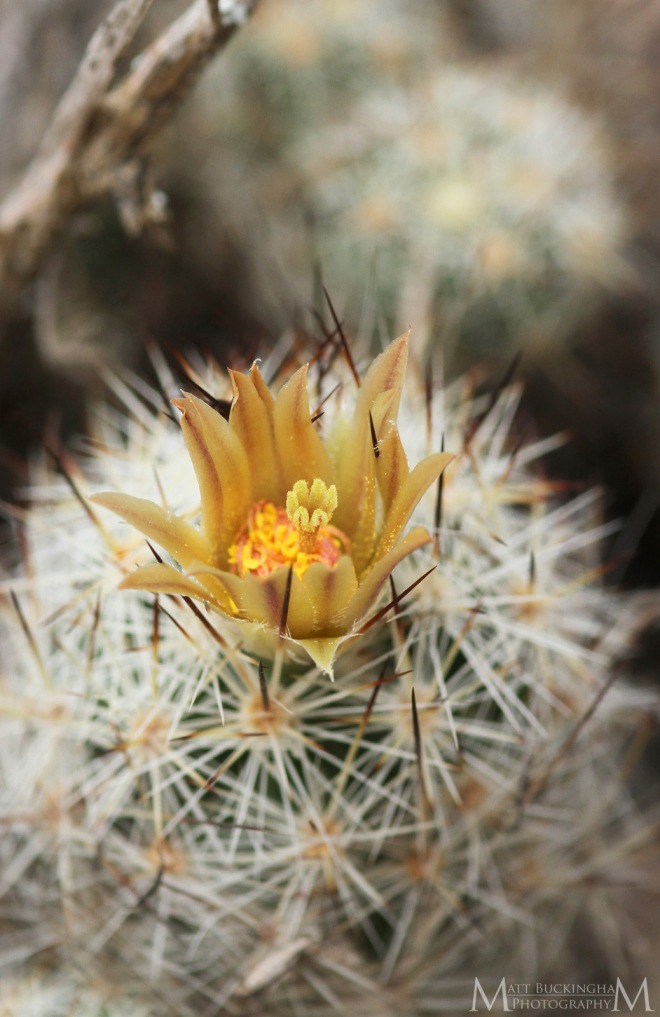 And then there were more Lady Fingers (Echinocereus pentalophus).  Though these proved to be fairly common during the trip I never tired of seeing them, and could not resist every opportunity to photograph them. 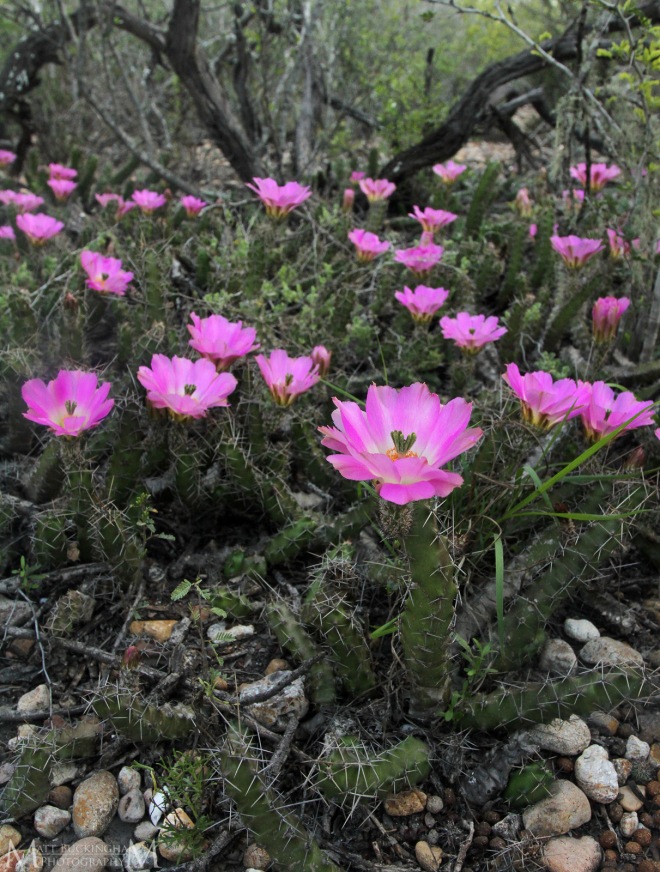 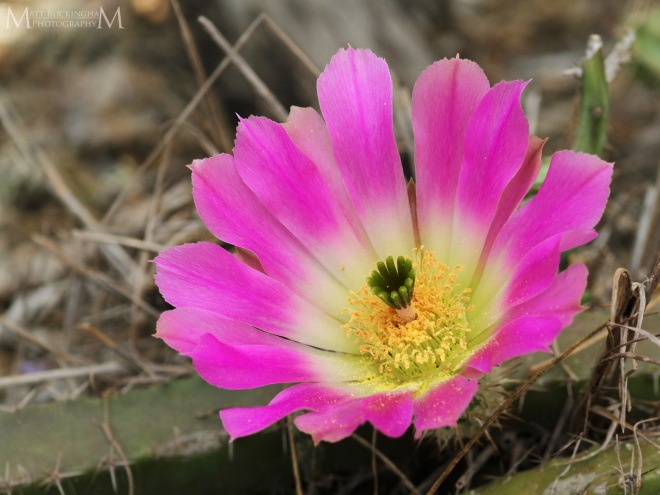 I found one particularly robust flowering specimen growing among a clump of Varilla (Varilla texana).  I came to learn that where Varilla grows, there are usually other interesting things to be found. 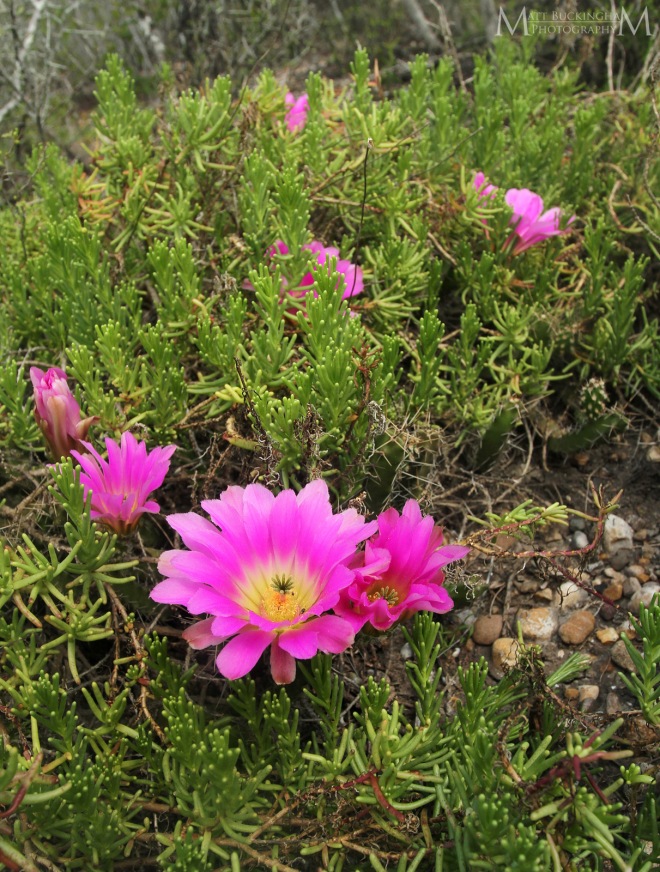 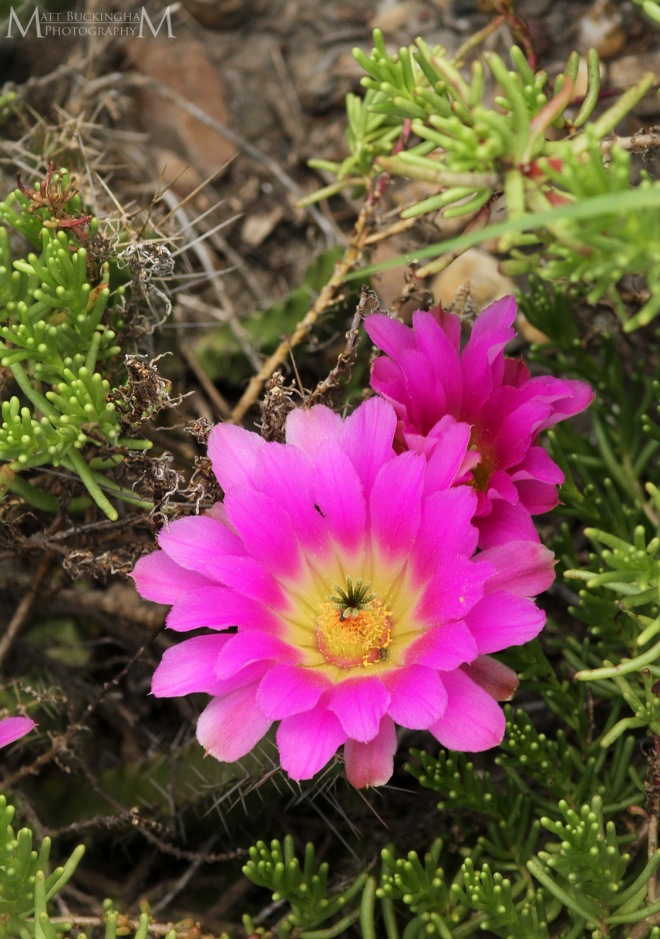 We also observed several Strawberries Pitayas (Echinocereus enneacanthus), Fitch’s Hedgehog Cactus (Echinocereus fitchii), Heyder’s Pincushion Cactus (Mammillaria heyderi), and a few Peyote (Lophophora williamsii) on the property, however these weren’t in bloom.  I had hoped to photograph Peyote this trip, but a suitable opportunity did not present itself.

There were plenty of other flowering plants to admire, however.  Perhaps the most striking was the Berlandier’s Nettlespurge (Jatropha cathartica).  It seemed to prefer the same gravelly slopes as the cacti. 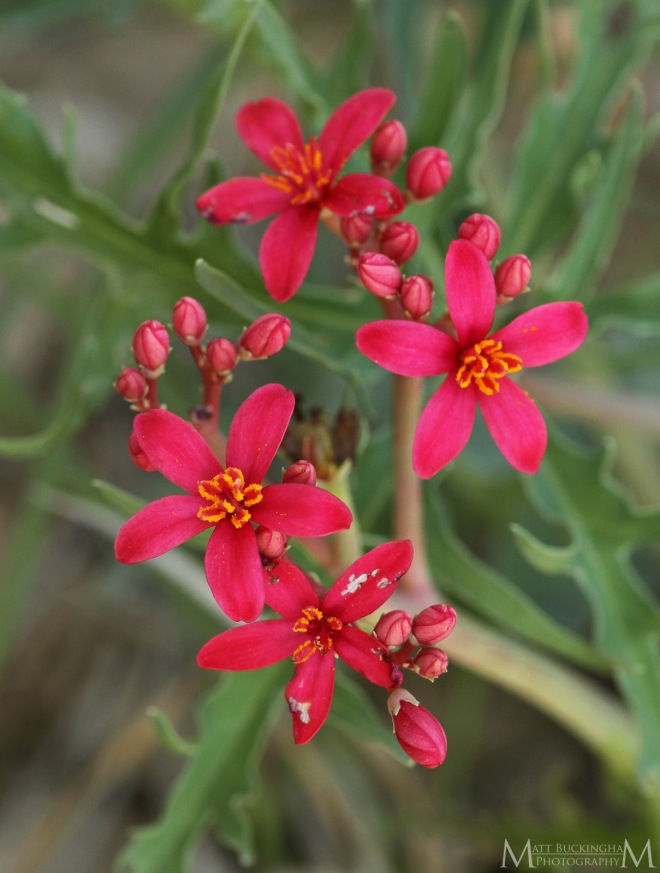 While on my knees looking for Peyote I spotted a group of tiny yet striking blooms.  The Glandular Milkwort (Polygala glandulosa) occurs in only a handful of South Texas Counties. 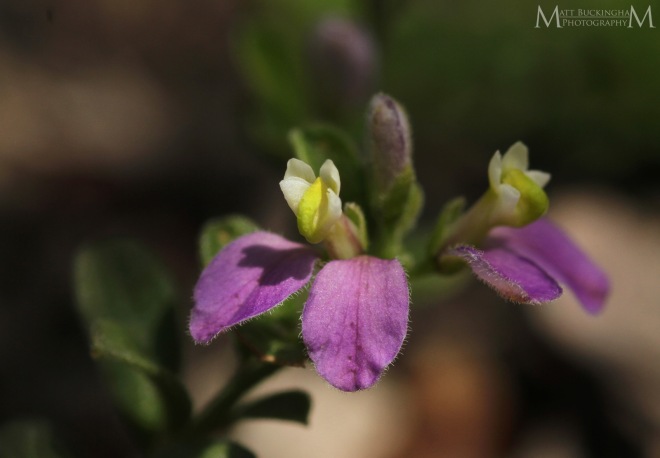 It was hard not to stop and admire the Guayacan (Guaiacum angustifolium), which was blooming throughout the thornscrub. 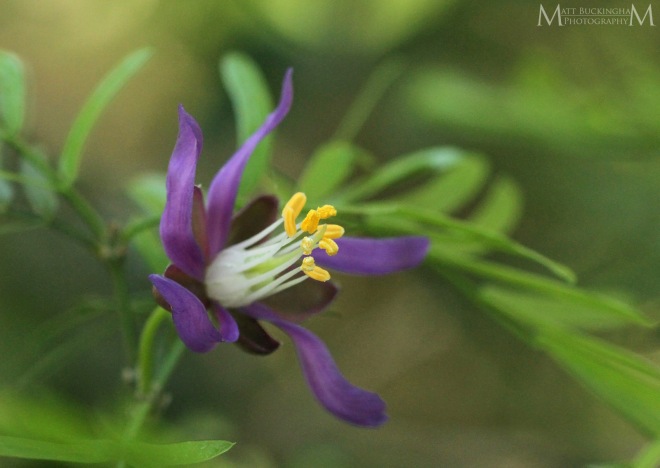 After arriving at the property, we split up to scour the area.  Seth soon came to find me.  He had an excited grin and told me that he had something to show me.  He led me to a large Texas Tortoise (Gopherus berlandieri) that had crawled halfway down its burrow.  I wanted so badly to photograph it, but despite waiting for some time, it refused to show its face, and we had to continue our hunt for the Star Cactus.  I was luck enough to photograph another South Texas Treasure, the orb-weaver Argiope blanda.  A. blanda occurs in the United States only in extreme southern Texas. 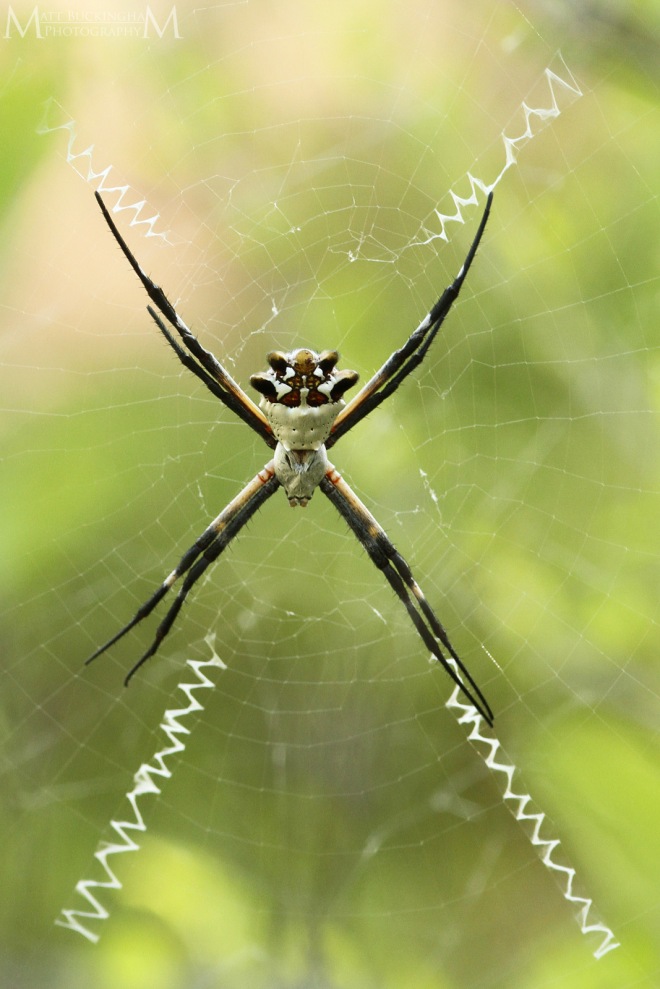 Though I did not get to photograph the Star Cactus in bloom, it was a day full of natural wonder spent in good company, and I left with a real sense of contentment, both in the things I had seen and photographed, and in the knowledge that organizations like the Nature Conservancy exist to protect our planet’s great biodiversity.