Before I post my 2019 highlights in biodiversity, I thought it would be fun to look back on some of my favorite photos and moments of the last decade.  It was hard to narrow thousands of photos down to just ten, but I enjoyed the process of reliving so many special experiences.  So without further ado, here are my top 10 photos of the past 10 years:

2010 was a big year for me.  I left for Argentina in early January, and spent the better part of the year living in a research station in Iguazú National Park working on my Master’s research.  It was here that I met my future wife, Carolina.  When I wasn’t too drained from long days in the field, I spent much of my free time wandering around the breathtaking park, taking in the scenery or admiring the diverse bird communities of the Atlantic Forest.  My camera at the time was a simple Canon T1i.  It was basic, but took high quality images and withstood the humid subtropical rainforest.

The image below was one of my favorites from the park.  I used my zoom lens (Canon 100-400mm) to create a tight crop around one small section of Iguazú Falls, one of the largest waterfalls on the planet.  I hoped the image might convey the awe-inspiring power of this magical place.

At the start of 2011 I spent six weeks in Argentina with Caro’s family in Entre Ríos.  Caro and I also visited Patagonia where we saw the largest Magellanic Penguin colony in the world and camped at the base of the Andes.  In April I made my way east to work on a project monitoring populations of obligate salmarsh birds in the Chesepeake Bay and Eastern Shore of Maryland and Virginia.  My favorite part of living on the Delmarva Peninsula was the proximity to interesting places to explore.  Within just a couple hours I could be in 8 different states.  I explored the Adirondacks and went looking for moose in New Hampshire.  I went birding in the Outer Banks, and searching for Red Wolves at Alligator River National Wildlife Refuge.  It was there that I captured the image of the male Prothonotary Warbler (Protonotaria citrea) below.  I watched as he and his mate took turns foraging and bringing back caterpillars and other invertebrates to feed the developing offspring hidden in their nest cavity.

In February 2012 I started as a Conservation Lands Biologist with Bayou Land Conservancy.  It was a rewarding job, and it introduced me to many interesting, influential people.  One such person was Bruce Bodson, who taught me a lot about environmental issues and policies and concepts of land conservation.  Bruce has a passion for paddling, and I joined him on a number of treks.  The most memorable was a three-day paddle down the middle Neches.  Our first night, while camped on one of the many sandbars hugging the sinuous waterway, we noticed a tiny sand-colored beetle visiting the lantern at 1 in the morning.  It turned out to be a Ghost Tiger Beetle (Ellipsoptera lepida), a seldom encountered predator that, to the best of my knowledge, had not previously been encountered in the Pineywoods.  2012 is also the year I began using my trusty Canon 7D, which would accumulate over 200,000 shutter actuations before I would eventually upgrade to the 7D Mark II.

Ghost Tiger Beetle on a Sandbar in the Neches River.

I spent much of 2013 exploring the Pineywoods of East Texas.  I went looking for rare plants, salamanders, and whatever else I could find.  In June I went camping with my good friend James Childress.  We swam in secret ice cold swimming holes and trekked through remote wilderness areas.  While wandering the rich forested slopes above one of the numerous streams dissecting the East Texas forests, I heard James call out “CANEBRAKE!”  He had indeed found one of these enigmatic rattlesnakes coiled in ambush among the leaf litter.  How he spotted it, I’ll never know.  It was virtually invisible, and if I took my eyes off it for even a moment it took me some time to relocate it, despite knowing exactly where it was.  It never moved during our encounter, proving just how docile and mild-tempered this species is.  They are far more likely to rely on their remarkable camouflage than act aggressively toward intruders.  This was just one of many special encounters of a year spent exploring the woods. 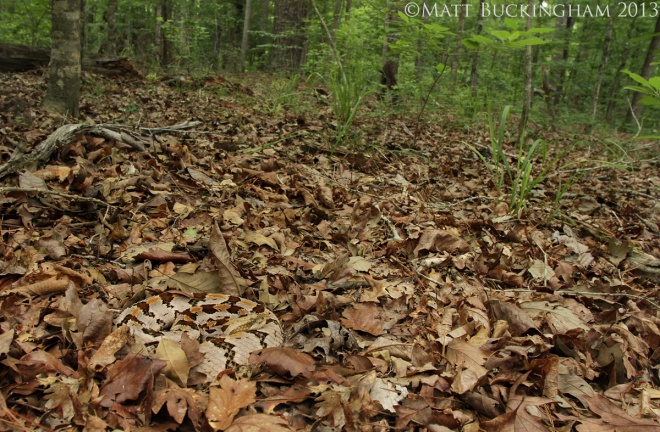 Canebrake Rattlesnake (Crotalus horridus) in a rich forest in the Pineywoods.

2014 was another big year for me.  Finally, after years of working on the painstaking Visa process, Caro was able to come to the states, and we married shortly after.  After years of seeing each other only a couple of times a year and communicating primarily via Skype, we were finally able to start our life together.  In 2014 I also accepted a job with the Texas Department of transportation and moved to Lufkin.  I would miss working with Bayou Land Conservancy, but was excited about living in the heart of the Pineywoods.  Many of my favorite places were now at my fingertips.  I was excited to introduce Carolina to these places that meant so much to me.  One such place is a mature longleaf pine savanna in the Angelina National Forest.  It was one eerie October evening when we spotted an ancient gnarled post oak among the longleafs.

In 2015 we continued our explorations of the Pineywoods.  One perfect spring day we found ourselves in a rich woodland in the floodplain of a small stream.  This particular site is home to one of the few remaining populations of Bloodroot (Sanguinaria canadensis) in the state.  This beautiful little spring ephemeral is one of my favorite of all wildflowers.  They are finicky by nature, and will only open fully on days where the temperature, humidity, and brightness are just right.  That day I ended up with dozens of images I was happy with, but the photo below stood out from the rest.  Perhaps it is the arrangement of this natural bouquet, or the bokeh of dried maple leaves.  Maybe it’s the memory of being in that place at that time.  Whatever the case, this image remains to this day one of my favorite wildflower shots.

In 2016 I introduced Carolina to Big Bend and the awe-inspiring landscapes and biodiversity of the Trans-Pecos.  There are many images from those trips that could have made this list, however I chose a photo made closer to home.  Several years ago my good friend Scott Wahlberg found a colony of Rafinesque’s Big-eared Bats (Corynorhinus rafinesquii) in a handful of abandoned buildings in an East Texas ghost town.  In October of 2016, Caro and I visited these dilapidated structures, and found several very active bats preparing for their nightly emergence.  Photographing the very active Chriopterans was a real challenge, but I walked away with an image that I felt captured the unique nature of these declining winged mammals. The Rafinesque’s Big-eared Bat has suffered decades of steady declines due to habitat loss, and today are a species of significant conservation concern in the Lonestar State and many other portions of their range.  I hoped that this image may serve to educate, and help others to understand that bats are not creepy, disgusting creatures to be feared, but rather endearing, interesting, and important members of a healthy functioning ecosystem.

A Rafinesque’s Big-eared Bat in an old abandoned homestead in an East Texas botomland.

I started this blog in 2017.  With a renewed purpose and passion for my photography, I probably took more photos that year than any other in the past decade.  This made choosing a single photo from 2017 exceedingly difficult.  There were probably more “obvious” contenders for the best image of the year, but I settled on the photo below, which is fairly simple in its composition and colors.  One late April day while my buddy James Childress and I were exploring the Sabine National Forest, we came across a particularly handsome female Texas Brown Tarantula (Aphonopelma hentzi) in a longleaf pine savanna.  It’s surprising to some that these massive arachnids, which are typically considered denizens of the desert southwest, can be found as far east as Missouri, Arkansas, and Louisiana.  In East Texas, tarantulas are generally uncommon, and associated with friable loamy pockets in a broader matrix of loose sands.  I posed this individual on the charred bark of an old longleaf pine to create a story about the species and the unique habitat where we found it.

Texas Brown Tarantula on the trunk of an old longleaf pine.

2018 was another great year for photography.  James and I acquired super telephoto lenses, which helped rekindle my passion for bird photography.  I captured many bird images across the state, however the photo I chose for 2018 is not avian in nature, but rather an image of one of my all time favorite animals: the Spotted Salamander (Ambystoma maculatum).  I have taken dozens, if not hundreds of photos of this species, but the image below stands out as my favorite of all time.  Everything came together – a beautiful individual, an excellent pose, lovely substrate, and perfect light.  Those who know me well shouldn’t be surprised to find a salamander on this list, and I had to pay tribute to a species that holds such a special place in my heart.

This past year was trying in many ways, and I spent less time behind the lens than usual.  Fortunately we were still able to get in some nature therapy, including a trip to experience the West Texas superbloom in spring, and an early summer trip to the Texas Panhandle and northern New Mexico.  It was during the latter trip that my chosen photo was taken.  I was finally able to capture an image that I had long visualized.  This year we saw more Pronghorn (Antilocpara americana) than I had ever seen on numerous trips through the region.  Perhaps it was a wet spring that allowed them to disperse to take advantage of ample water and lush vegetation.  I was able to capture a low angle portrait of the majestic, approachable buck below as it watched me with what I would describe as cautious curiosity.  I love the image for its simplicity, with a foreground and background that seem to blend save for barely discernible blurred blades of grass.  It allows the shapes, textures, and colors of the Pronghorn to be suitably admired.  That trip would go down as one of the most memorable in recent memory, with incredible wildlife sightings including pumas and swift foxes.

A Pronghorn buck in a shortleaf grassland in eastern New Mexico.

In all, the past 10 years were very good to me.  I look forward to what the next decade has in store, and hope that it will be full of friendship, discovery, nature, and plenty of good photo opportunities!