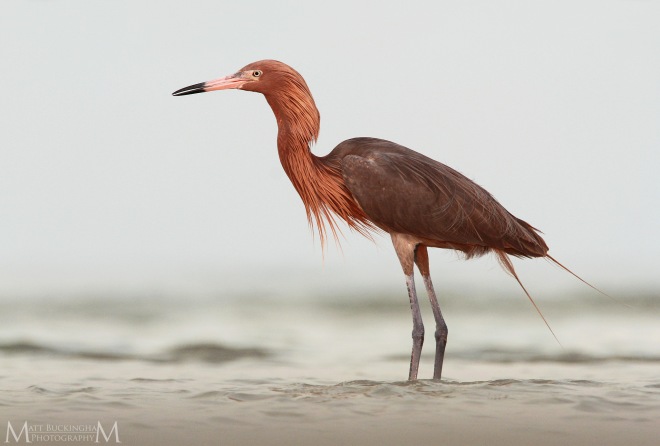 Thunder rumbled in the distance as anvil-shaped storm clouds rose to the west of the Bolivar Peninsula.  I sighed in frustration; not because I disliked these May storms that form along the Gulf, but rather because the magic hour of perfect photographic light had just begun, and the clouds were soon to blot out the sun, leaving the beach cloaked in grey.  Desperately I searched for a subject to make the most of the few minutes of usable light that remained.  Soon I spotted one of my favorite birds, a Reddish Egret (Egretta rufescens) standing stoic in the surf.  Quickly I dropped to the sand, laying belly flat in an attempt to meet this special wading bird on its level.  Just as I set my lens on it I noticed that the world was rapidly darkening as the wispy margins of the storm clouds drifted in front of the sun.  What I found, however, was that this thin veil of clouds actually created a very special light that seemed to paint the egret.  I managed to take advantage of a window of less than a minute before the cloud’s dense heart crossed over the sun, robbing the evening of any further photographic opportunities, and captured the image above.

Before the clouds’ arrival I did manage to capture a few images of other avian beach dwellers.  American Avocets (Recurvirostra americana) were plentiful.  It was the end of May now, and many shorebirds are still making their leisurely journeys northward as their summer breeding grounds gradually thaw.  I consider avocets to be one of our most beautiful shorebirds, particularly when their heads and necks are painted burnt orange in their alternate plumage. 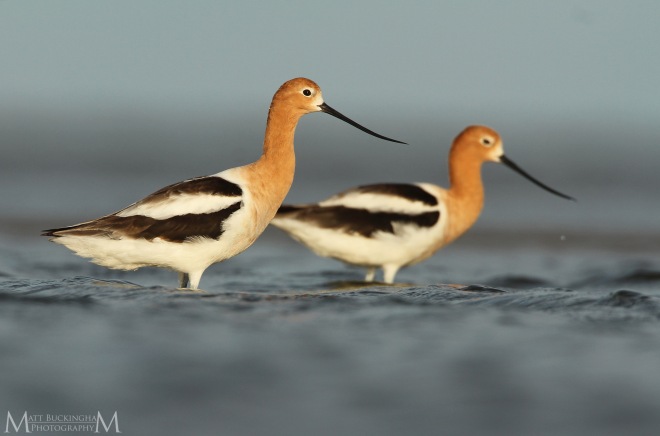 A variety of “peeps” were still present, and we spotted Sanderlings, Least Sandpipers, and a few Western Sandpipers.  Also present were several Wilson’s and Semipalmated Plovers (Charadrius semipalmatus).  The latter allowed for a fairly close approach as it probed the wet sand for worms and other invetebrates.

Though they seem scarce along much of the coast, Reddish Egrets are quite common on this stretch of the Upper Texas Coast.  They are perhaps the most entertaining feathered-thing around, and I laid for several minutes watching them perform their elaborate predatory dances.  They seemed random yet choreographed in their movements, as if putting on some performance as they skipped and danced across the shallow water’s surface, stirring up tiny fish and fanning their wings above them, confusing their prey and shading them to make them more visible at the same time. 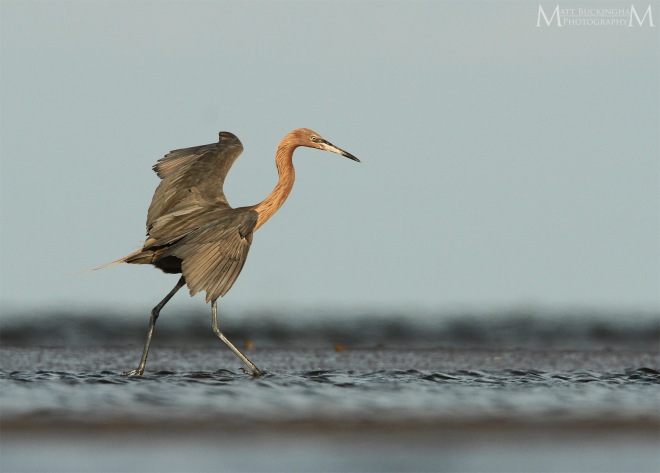 Ruddy Turnstones (Arenaria interpres) were also out in force.  Many had completed molting into their breeding plumage and were truly a sight to behold.

This stretch of beach is an important breeding ground for Least Terns (Sterna antillarum), a species of conservation concern.  Here they block off the main breeding area in order to protect the fragile nests, which are little more than scrapes in the sand.  The terns’ breeding efforts were kicking into high gear during our visit, and we were fortunate enough to be bombarded by several pairs that felt we were getting too close to their precious offspring, still developing within their calcium carbonate shells.

We left the beach as dusk was closing in and the Ghost Crabs left the safety of their burrows to scavenge the shore.  Caro and I watched an impressive display of lightning ahead of us, and before long the storm overtook us.  It was impressive and violent, a striking contrast to the serenity of the bird-filled beach.  Perhaps it is these contrasts – tranquility and exhilaration – that keep drawing us back to the coast.

The next day we found ourselves in the Columbia Bottomlands of Fort Bend County.  These seemingly out of place forests of ancient oaks and elms harbor staggering biodiversity including many species that are rare to uncommon elsewhere.  One such species is the Texas Pinkroot (Spigelia texana).  These dainty forbs are endemic to moist woodlands and prairie remnants in southeast Texas, with a few specimens known from isolated locations further north and west in the state.

Growing nearby were several Aquatic Milkweeds (Asclepias perennis).  This species is sporadically encountered in East Texas, though it seems most common in these bottomlands near the coast.

The Columbia Bottomlands are also home to a diversity of birdlife.  In the shallow waters of an ancient oxbow off the Brazos River we observed Anhingas, Great and Snowy Egrets, Great, Little Blue, Tricolored, and Green Herons, Yellow-crowned Night-Herons, White Ibis, Black-bellied Whistling Ducks, Common Gallinules, and more.  Prothonotary Warblers and Northern Parulas called from the trees lining the water’s edge and the call of a Barred Owl rang out in the distance.  Perhaps the most spectacular of all was the Purple Gallinule (Porphyrio martinicus), which dazzled us with its seemingly impossible sheen of iridescent blue and green.

In early July we found ourselves back on the coast.  This trip we spent more time on the beach and in the shops in Galveston, however we found ourselves in the saltmarsh of Galveston Island State Park during the final hour of daylight.  Here I struggled to capture images of Black-necked Stilts, Yellow-crowned Night-Herons, Roseate Spoonbills, and Scissor-tailed Flycatchers.  At the end of the day I found myself instead pursuing one of the most familiar coastal birds – the Willet (Tringa semipalmata).  Though common and by many accounts “drab”, I set out to capture an interesting image of these charismatic shorebirds.  I laid belly-flat in the mud and scanned the landscape to try and formulate a plan as hordes of mosquitoes drained my blood.  Soon, as I watched a Willet approach, I developed a concept in my head.  I framed the shot by turning my lens to an open patch of mud in front of me, and utilized the Salicornia and other halophytic vegetation in order to create a blurred foreground and background that I hoped would make the bird pop.  I lucked out as the bird moved into the frame and called out its displeasure, likely to my proximity to its nest or chicks I imagined.  And with some luck and patience, I captured the image below. 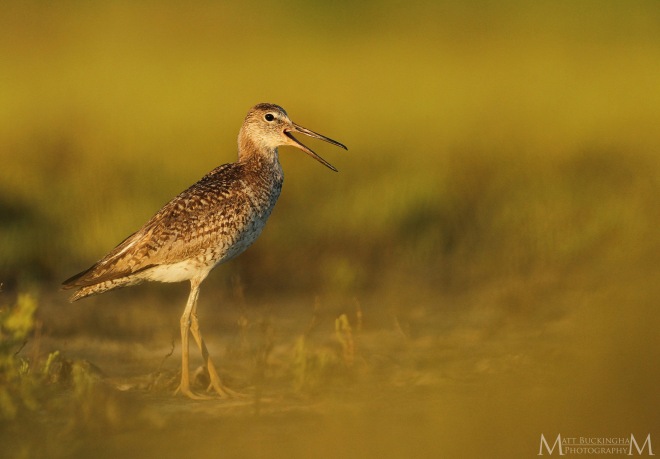 Each trip to the coast brings with it some new adventure and opportunity to witness a unique natural beauty not found elsewhere in the state.  It also offers some of our state’s best photographic opportunities, particularly for birds.  I look forward to many future trips, and hope that I may continue to document in some way the very special plants, animals, and natural communities that can be found there.