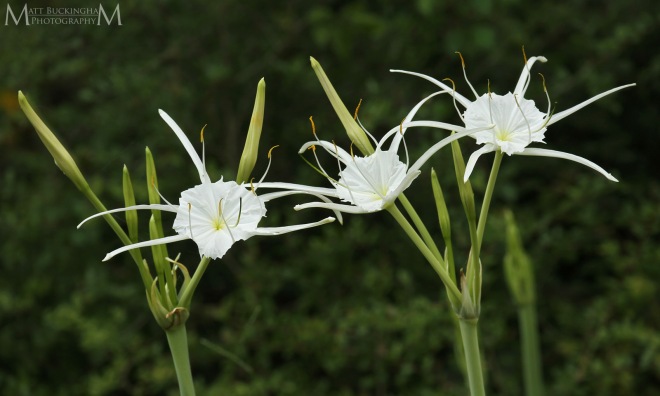 Spider Lily is an appropriate common name for members of the genus Hymenocallis.  Hymenocallis diversity is greatest in the southeast, specifically Florida.  In Texas there are only 2 species.  The familiar Hymenocallis liriosme blooms in the spring in wet ditches, wet pastures, wet prairies, marsh edges, and similar wetland habitats.  The less familiar Hymenocallis occidentalis is typically a species of open woodlands and mature forests.

Hymenocallis occidentalis blooms in the heat of summer.  However, it can easily be located in the spring when it puts up its thick, fleshy leaves.  It seems to be uncommon in Texas, occurring in a handful of scattered counties in the state’s eastern third.  Texas plants are assigned to the variety eulae.  In H. occidentalis var. eulae the leaves typically wither prior to flowering.  There has been some debate as to whether or not this variety merits being elevated to the species level.

I have seen both the leaves and blooms of H. occidentalis on numerous occasions, but have never succeeded in getting a photograph I was satisfied with.  I hoped to change that by adding it to my 2017 biodiversity list.  I have been to a few remote locations where I have seen hundreds of leaves carpeting the forest floor in the spring.  Unfortunately I didn’t have time to make it out there this summer, and instead settled for photographing this roadside population I discovered last year just 30 minutes from my house.  Some of the species on my list are a real challenge to find and photograph.  Fortunately, Hymenocallis occidentalis wasn’t one of them!