Carolina and I have made three separate trips to the Upper Texas Coast year – one each in January, February, and March.  In January we rented an AirBNB in Galveston with our good friends James and Erin Childress.  We’ve really come to like this way of finding accommodation, and have stayed in some great places for very reasonable prices.  But I digress.

The weather was generally gloomy and gray during out visit.  This doesn’t make for a fun trip to the beach, however it’s usually pretty good for photography.  So while Caro and Erin combed the beach, James and I got down on our bellies and started looking for things to point our cameras at.

One of the first subjects was a banded winter-plumaged Piping Plover (Charadrius melodus).  Initially a victim of market hunting, this Federally Threatened species continued to experience significant population declines after the practice was outlawed, as the shorelines it depends on have rapidly disappeared to development.  Thanks to legal protections and various conservation initiatives, populations appear to be slowly rebounding. 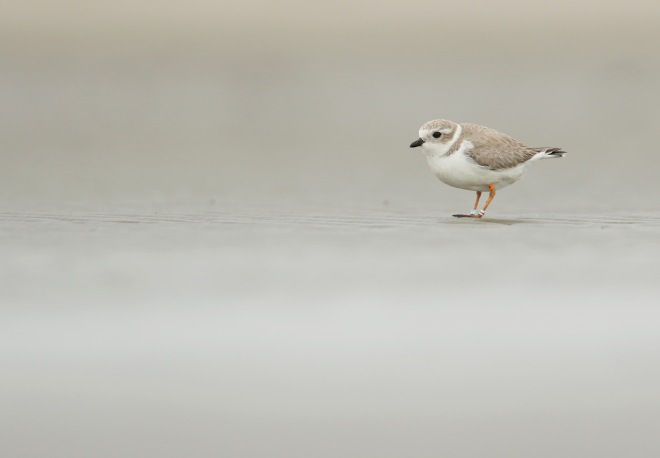 We were also lucky enough to observe several Long-billed Curlews (Numenius americanus) foraging along the surf.  The beaks on these guys are otherworldly.  They use them to probe tiny burrows in the earth in search of hidden invertebrates.  The curlews are winter residents along the coast.  They nest primarily in shortgrass prairie and meadows in the intermountain west.  Their breeding range barely enters Texas in the extreme northwest corner of the Panhandle, where Caro and I were lucky enough to see them last year.

In a remote stretch of undisturbed beach I came upon an avian extravaganza that I won’t soon forget.  Thousands upon thousands of American Avocets (Recurvirostra americana) had congregated on a narrow spit of sand just offshore.  The faintly sweet smell of uric acid greeted my nostrils, and a cacophony of bird chatter filled the air.  To my surprise, they were not wary and allowed a close approach.  I enjoyed playing with various compositions.  I was happy for this rare opportunity to create images that were more artistic than diagnostic. 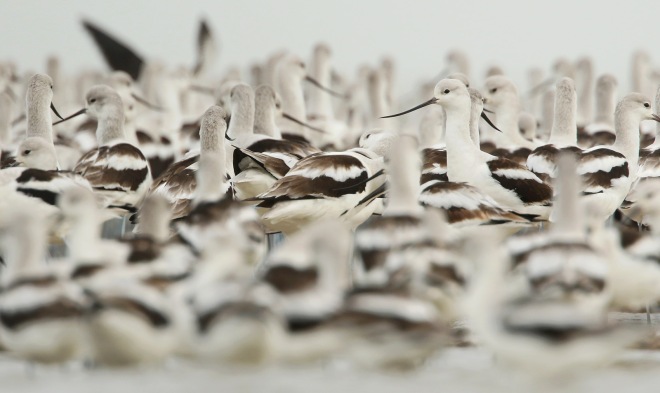 The avocets seemed indifferent to my presence, so I was surprised when through my viewfinder I saw that they all suddenly took flight with a deafening roar of alarm calls.  Surely I hadn’t spooked them.  The culprit responsible soon revealed itself, as a Peregrine Falcon (Falco peregrinus) shot into the undulating sea of feathers like a bullet.  The falcon worked the avocets, pushing them farther out to see.  Eventually, the avocets returned, but the falcon soon struck again.  The scenario repeated itself several times, yet for all its speed and brawn, the Peregrine was unsuccessful in capturing one of the avocets.  Perhaps with such a huge group of birds moving as one, the confusion is too much and focusing on a single target is too difficult.  Then again, perhaps the raptor wasn’t really hungry, and just felt like messing with the poor shorebirds. 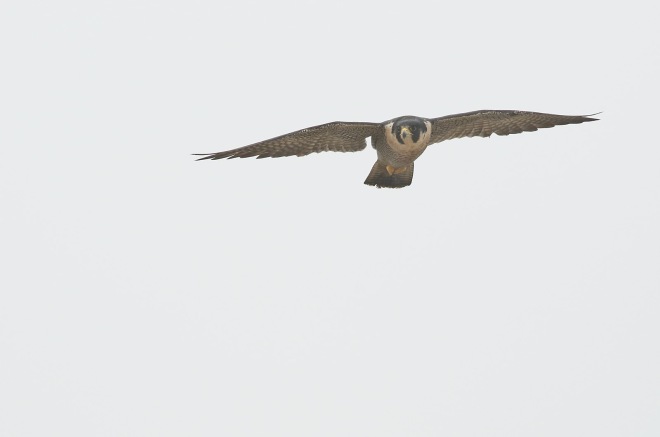 The next day we spent the evening exploring the Saltmarsh.  While I was slowly creeping toward some ibises foraging in the incoming tide, I heard James call out “Nelson’s!”  He had found and successfully photographed a Nelson’s Sparrow (Ammodramus nelsoni), an elusive lurker that tends to remain hidden in the grasses.  I was admittedly jealous as I rushed to his location.  We waited for some time, but the sparrow never gave us another clean look, and the best I could manage was a shot through the tangle of saltmarsh grasses. 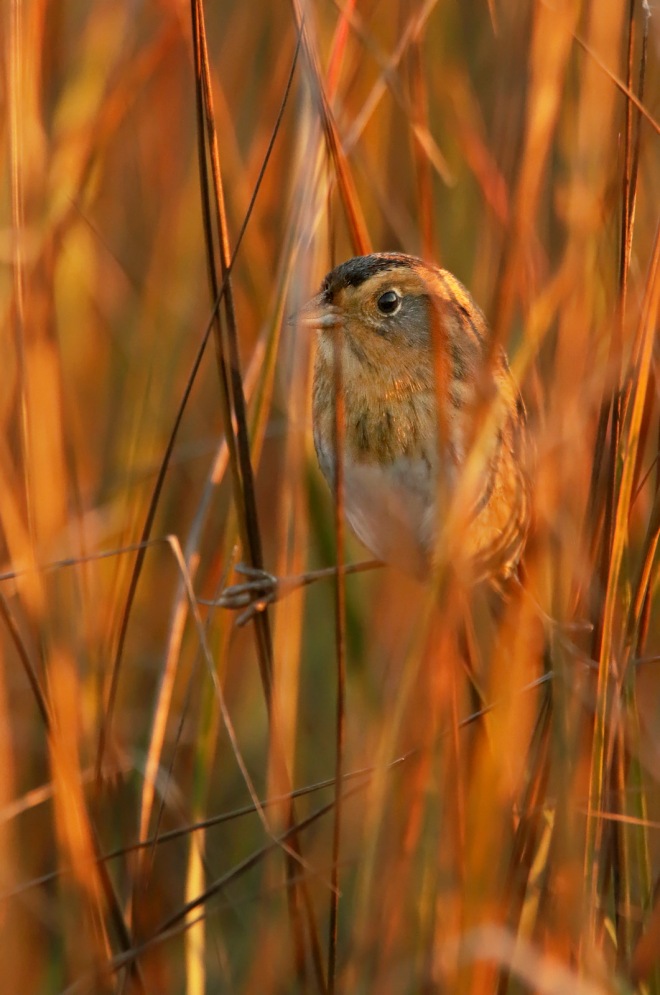 I wasn’t aware, but Galveston has a crane festival, of sorts, celebrating the annual return of Sandhill Cranes (Grus canadensis) to the island.  We missed the festival, but we were lucky enough to see a number of cranes.  I generally see several large groups of Sandhill Cranes each winter, but have thus far been unsuccessful in obtaining a shot I was happy with. It has been my experience that they are either foraging in a heavily modified pasture or they are too skittish to approach. Last weekend while on a birding trip to the coast we spotted a small group in a little coastal prairie remnant. I was able to utilize dense vine cover along the fence to creep closer to the birds until i reached a gate that I could shoot through. In the end I was happy with my images of this incredibly elegant species. 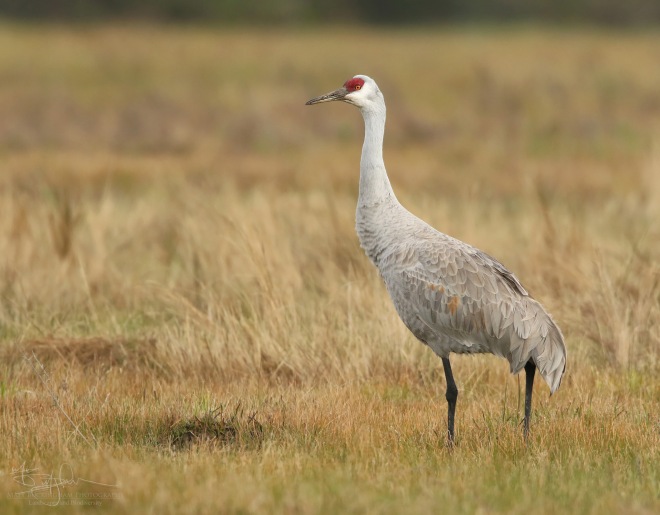 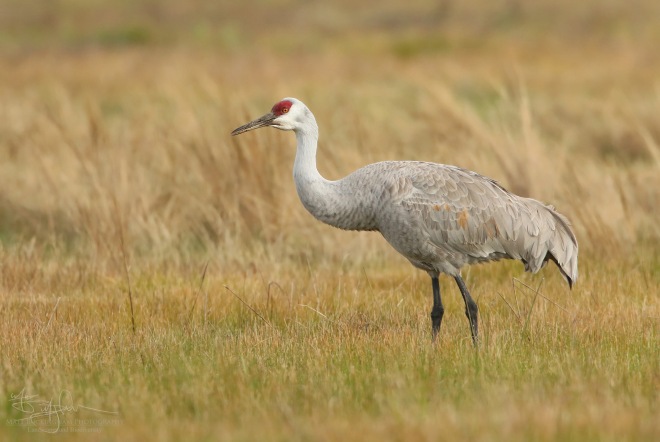 Watching the cranes, I immediately drew similarities to Ornithomimidae, a family of therapod dinosours that bore a striking resemblance to a number of long-legged, long-necked birds. Perhaps the most famous of these are members the genus Gallimimus which were featured in the movie Jurassic Park. Something about the pose I captured below reminded me of those prehistoric creatures.

Carolina and I returned to Galveston in late February.  While driving through one of my favorite marshes, Caro spotted a little gathering of Wilson’s Snipe (Gallinago delicata).  These common yet elusive shorebirds have long been a nemesis of mine.  On their northern breeding grounds they can often be seen displaying in the open from fence posts, shrubs, and other elevated perches.  On their wintering grounds, which include Texas, however, they stay hidden in the grasses of wet prairies, marshlands, and the margins of various water bodies.  95% of my snipe encounters consist of me getting to within 15 feet of the bird and not realizing it until the snipe explodes from the grass and flies off out of reach.

The difficulty of capturing them on film (card?) has drawn me to this species.  After Caro spotted them, I was able to park, and use my truck as a bit of a blind as I got out and crept toward them on my hands and knees. Once I got within range I sat and waited.  I took the image below as one of them began moving about in search of prey. To me, this provides a sense of how I normally see the species (those rare times when they don’t fly off): superbly camouflaged and well hidden among the senescent brown leaves of Distichlis or some other grass species deep in the marsh.

Shortly after I captured the image above, the snipe actually moved out to forage in the open of the mudflat. The light was improving and things were looking good for capturing the snipe image I’ve always dreamed of. Unfortunately due to my position I was unable to get to the angle I wanted, and some vegetation along the ditch was obscuring my view, despite the fact that the bird was out in the open. I captured a few images I was relatively happy with, and then made the foolish mistake of slowly trying to move into a better position. As I did I spooked this snipe as well as several others, who all flew well out of reach behind a fenced pasture.  Satisfied with our snipe encounter, we went to eat at our favorite local restaurant and spent the afternoon at the beach. 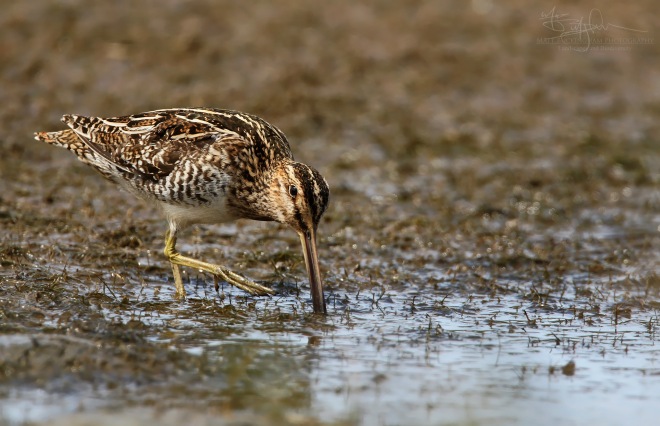 In the evening we returned to find the snipes once more.  I was able to capture a few more images before we pushed deeper into the marsh. 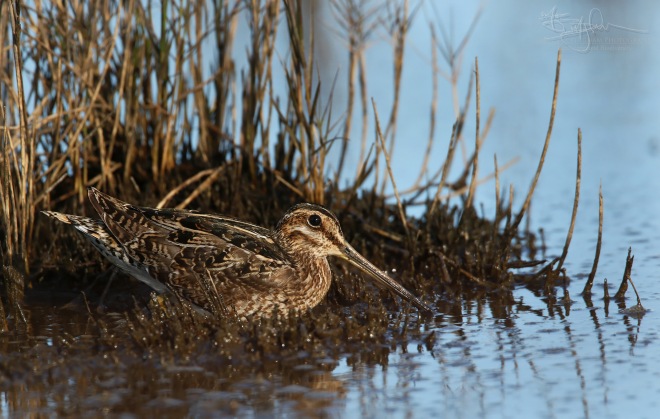 In one of the numerous tidally influenced pools I spotted a pair of Mottled Ducks (Anas fulvigula).  The male was kind enough to pose in the open for a shot that showcased a bit of the surrounding habitat.

Where the marsh met the bay we found a group of White Ibis (Eudocimus albus) coming into breeding plumage.  It’s always a joy watching these goofy wading birds probe their decurved beaks into the mud.

On the other edge of the marsh, where it met pasture that was once coastal prairie, we spotted a lovely male American Kestrel (Falco sparverius) perched on an old sign post.  It was a lovely way to end a great day on the coast.

The next week, Caro and I returned to Galveston.  We saw many birds, but photo opportunities were few and far between.  That is, until we returned to my favorite marsh.  Here a Solitary Sandpiper provided me with some incredible photo ops as it foraged in the shallow brackish water at the marsh edge.  Initially I spotted a Great Yellowlegs in this roadside pool.  I thought I had spooked all the birds in the area when I approached, but shortly after laying in the shallow water of the ditch, this Solitary Sandpiper crept out from behind a big clump of mud, and I watched it forage for nearly an hour.

The Upper Texas Coast is right at the extreme northern end of the wintering range for this species. I only occasionally encounter them, much less frequently than most other shorebirds in the region, so it was a real treat to get such a good photo op. Solitary Sandpipers breed in the taiga and tundra of Canada and Alaska. I read up a bit on the species after photographing it, and learned that it is one of the only shorebirds to nest in trees. Pretty interesting, if you ask me!

The next day we went with my mom to visit Anahuac.  I always enjoy birding with my mom, and the trips I took with her to the coast all those years ago helped to forge my love for birding and coastal ecosystems.  The day was cool and fairly slow, however a notable highlight was observing a pair of Northern Crested Caracaras (Caracara cheriway) near their nest. 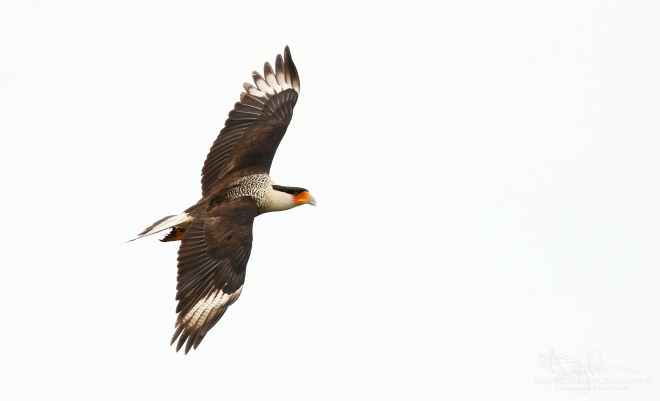 Over the past few weeks I spent a lot of time laying in marsh muck, taking in my surroundings.  Coastal marshes, especially the saltmarsh, are magical places.  Among the muck, stabbing needlerush, and squadrons of mosquitoes, one can find a unique cast of plant and animal characters that are found nowhere else in the world.  The Mottled Ducks, Solitary Sandpiper, Wilson’s Snipes, and other species pictured here share the marsh with Saltmarsh Snakes, Diamondback Terrapins, Seaside Dragonlets, Clapper Rails, Seaside Sparrows, and a whole host of other interesting species.  Northern Harriers and White-tailed Kites patrol the air and hermit and blue crabs scour the shallows. In my book, that makes for pretty good company.