I’ve always had a thing for myco-heterotrophs.  Those rebels of the plant world that decide that they don’t need the one thing that students of biology most associate with plants: chlorophyll.  Chlorophyll is that green pigment that we all learn about in biology class.  It gives leaves their characteristic green color and it is instrumental in the process of photosynthesis, where plants utilize sunlight, carbon dioxide, and water to create glucose, which provides energy for the plant.  Less commonly taught is the story of the myco-heterotroph: a plant that does not undergo photosynthesis, and as such does not contain chlorophyll. 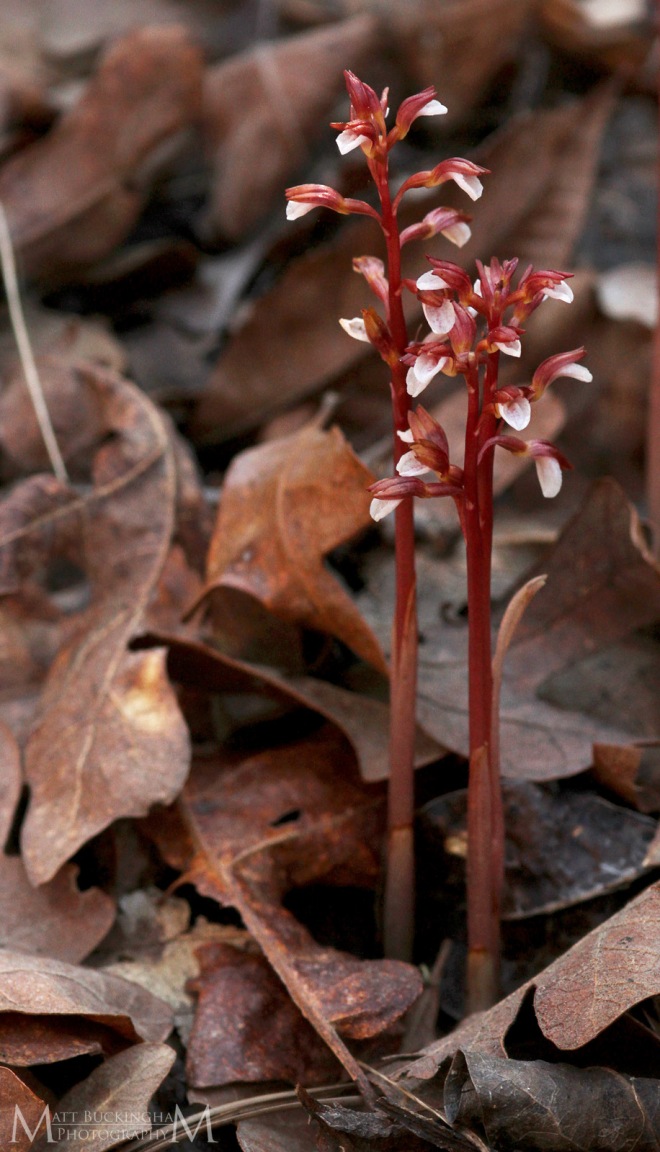 How then does the myco-heterotroph obtain its energy?  It is, in fact a parasite, obtaining its food and nutrients from the mycorrhizal fungi of plant roots.  These fungi form complex relationships with plants in which they bolster the plants ability to absorb water and nutrients, and in turn receive glucose and other carbohydrates from the plant.  Many orchids are myco-heterotrophs, most notably in our area are those of the genera Corallorhiza and Hexalectris.  The Spring Coralroot (Corallorhiza wisteriana) is one such example.  Ironically, the orchids themselves depend on mycorrhizal fungi for their own survival.

The Spring Coralroot is the most widespread member of the genus Corallorhiza.  It occurs throughout most of the United States and parts of Mexico.  Here it occurs in a variety of habitats with a common factor: dense, undisturbed leaf litter that is conducive to the formation of large populations of mycorrhizal fungi.  Coralroots and other similar orchids were long described as saprophytic, obtaining their nutrients from decaying organic matter, however recent studies have identified their parasitic nature.  Corallorhiza wisteriana is likely one of the more common orchids in East Texas, however I had never been fortunate enough to see one in bloom, despite having spent considerable time in seemingly suitable habitat.  It is entirely possible that I have walked passed many without knowing.  These diminutive orchids are nearly impossible to see against the leaf litter.  Fortunately, I had some help in checking this species off my 2017 list.  My botanist friend Sonnia Hill found a large population on her property a few years ago.  She read about my list and was kind enough to offer her assistance.  After periodically checking on the progress of the orchids, we arranged a date for Carolina and I to visit and attempt to capture their beauty on film – or more appropriately compact flash card.

Sonnia’s property is in a unique area, combining elements of three Texas ecoregions: the Pineywoods, Post Oak Savannah, and Blackland Prairie.  Her ranch is home to a rich and interesting flora beyond the lovely coralroots.  Though it was still early for most things to be blooming, she did point out several Carolina Violets (Viola villosa) near the orchids.  I had yet to photograph this species and delighted in the opportunity.

En route between our house and Sonnia’s property we crossed a high ridge just north of Jacksonville.  This ridge rises a few hundred feet from the valley below.  The top of this ridge provides what is perhaps the most expansive view of East Texas.  Along the ridge the Eastern Redbud (Cercis canadensis) was in full, spectacular bloom.  I couldn’t resist stopping to capture its brilliance against the blue afternoon sky.

Though not rich in number of species, this trip was rich in the quality of those species observed, scenery, and camaraderie between friends with shared interests.  As we journeyed home I hoped that the splashes of pink from the redbuds lining the roadway were a sign of good things to come.