Beyond the South Texas coastal dunes, marshes, and prairies lies a unique, biodiverse community dominated by a variety of shrubs and small trees.  Variably referred to as South Texas brush country, mezquital, and Tamaulipan thornscrub, this semi-arid, subtropical community occurs in South Texas and the Mexican states of Tamaulipas, Nuevo Leon, and Coahuila.  It is home to plants and animals found nowhere else on earth, and in South Texas, marks the northern extent of several Latin American species that just barely enter the United States.

The Tamaulipan thornscrub in the Rio Grande Valley of South Texas is one of the United State’s premier birding locations.  My parents and I have made a number of birding trips here in the past, drawn in by the promise of catching a glimpse of one of these South Texas specialties.  During this trip the birding was fairly slow, but we did see many of the typical Rio Grande Valley species including Plain Chachalacas (Ortalis vetula), White-tipped Doves (Leptotila verreauxi), Green Jays (Cyanocorax yncas), Long-billed Thrashers (Toxostoma longirostre), Altamira Orioles (Icterus gularis), and Olive Sparrows (Arremonops rufivirgatus).  Unfortunately these species did not present me with any good photo ops.  I did luck out, however, when we found another Valley specialist, the Common Pauraque (Nyctidromus albicollis) roosting alongside a trail.  These members of the nightjar family are nocturnal and rely on their camouflage to roost on the ground during the day.  It was nearly invisible among the dried leaves and sticks littering the earth.  I utilized the dense natural debris to create the window effect seen on the photo at the start of this blog entry.

Many mammal species also reach the northern extent of their range in deep South Texas.  Unfortunately many of them are now gone.  The last Jaguar (Panthera onca) in Texas was killed in the Tamaulipan thornscrub in the 1940’s.  There are some that still hold onto hope that there may be a few Jaguarundi left in the Rio Grande Valley.  Though there have been no verified sightings in many years, there have been unverified reports.  Ocelots (Leopardus pardalis) are still hanging on in the brush country, though they are now rare, and protected under the Endangered Species Act.  In our explorations of the thornscrub we observed a number of mammals including White-tailed Deer (Odocoileus virginianus) and Collared Peccaries a.k.a. Javelinas (Tayassu tajacu).  The only mammal I was able to photograph was the little Eastern Cottontail (Sylvilagus floridanus) pictured below. 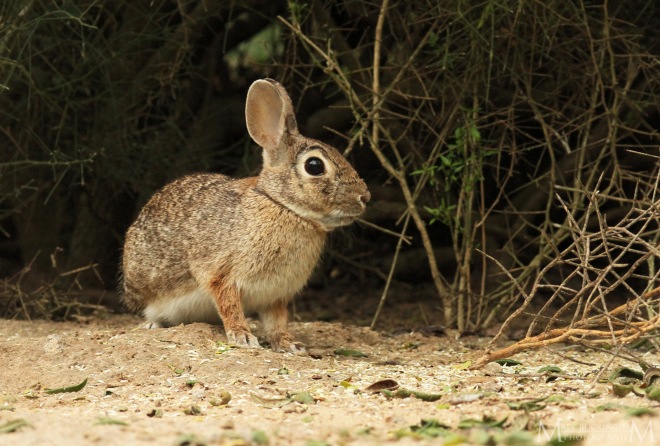 There are many reptile and amphibians whose United States distribution is also limited to the Rio Grande Valley.  Being an amphibian enthusiast, I was disappointed that we missed the heavy rains that brought out such rarities as the Mexican Burrowing Toad (Rhinophrynus dorsalis) and White-lipped Frog (Leptodactylus fragilis) by just a couple of days.  These species are explosive breeders that emerge to breed after heavy rains.  I did spend some time looking for the beautiful Speckled Racer (Drymobius margaritiferus), a primarily Latin American species that is known from only a couple of sites in South Texas.  I struck out on the snakes, but was able to photograph a couple of the areas conspicuous lizards: the Texas Spiny Lizard (Sceloporus olivaceus) and the Rose-bellied Lizard (Sceloporus variabilis). 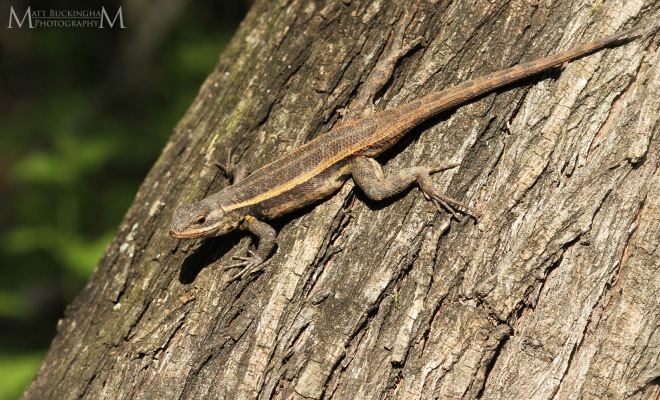 The Rio Grande Valley is also world famous for its butterflies.  While we observed many species, the only one I obtained a decent photo of was the Common Mestra (Mestra amymone).

Occasionally growing in the crooks of mature Ebano, a real botanical treasure can be found.  The epiphytic bromeliad Tillandsia baileyi, commonly known as Bailey’s Ball Moss barely enters the United States in South Texas, where it is rare.  It is much more striking than other members of its genus, which includes the familiar Spanish Moss (Tillandsia usneoides).

A conspicuous component of the South Texas brush country is the Anacahuita or Mexican Olive (Cordia boissieri).  Its bright blooms illuminate the native brushlands, and it is a popular native ornamental in South Texas.  The tree was reportedly utilized by native cultures and Spanish settlers to make jellies and dyes.  The leaves can be brewed in a tea that may help with rheumatism and various ailments of the lungs. 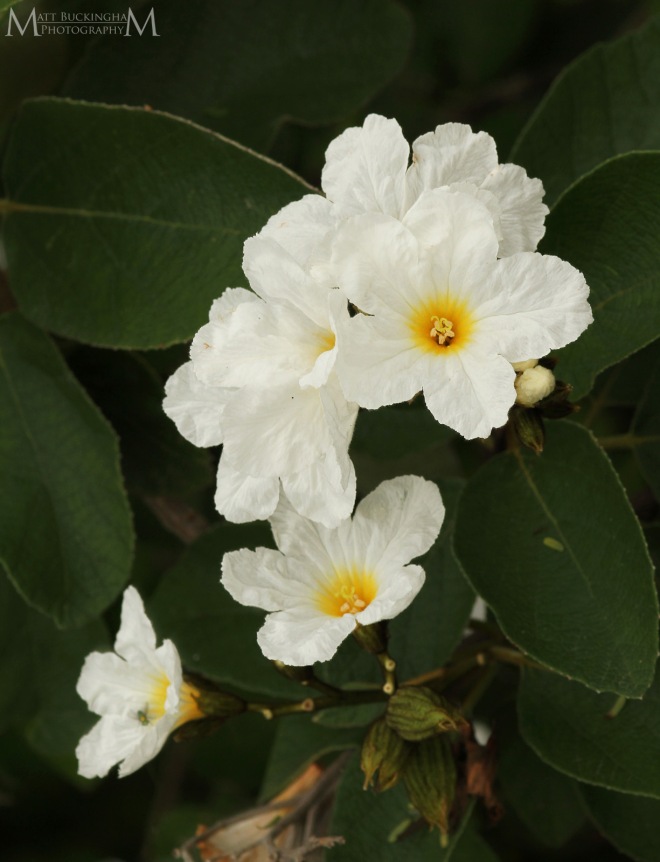 Many invertebrates can be found utilizing Anacahuita leaves and flowers.  The Wild Olive Tortoise Beetle (Physonota alutacea) is found exclusively on these small trees.

Many pollinators also frequent the blooms.  They due so at their own risk, however, because predators lurk beneath these flowers.  We observed this crab spider (Mecaphesa sp.) awaiting an unsuspecting victim.

South Texas is also home to a variety of native lantana species.  Brushland lantana (Lantana achyranthifolia) could occasionally be found scattered about the thornscrub. 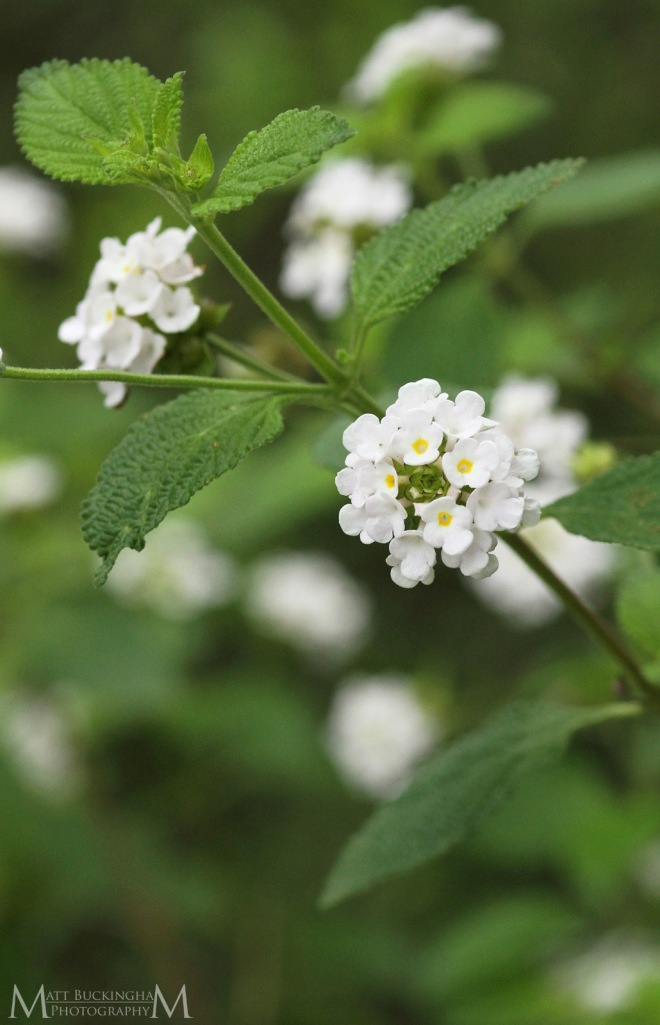 We also observed a couple of species of heliotrope, including the widespread Seaside Heliotrope (Heliotropium curassivicum), and the more range restricted Scorpion Tail (Heliotropium angiospermum) which occurs in South Texas and southern Florida. 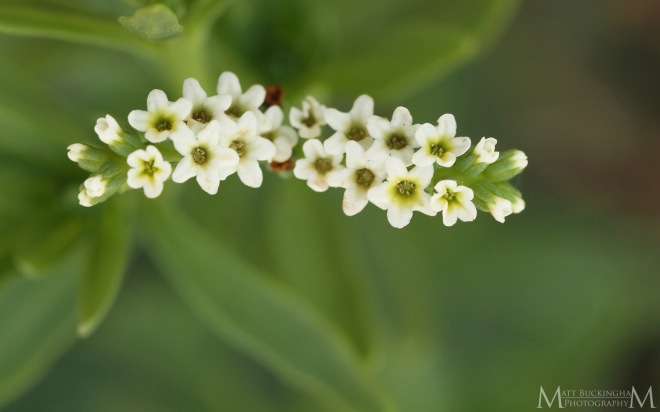 Shrubby Blue Sage (Salvia ballotiflora) occurs in the U.S. only in southern and western Texas.

Over the millennia, the meanders of the Rio Grande has slowly changed course, leaving in their wake old depressional oxbow scars.  The scars eventually filled with rainwater and runoff and developed a unique flora.  Known as Resacas these unique wetlands provide habitat for a host of rare plant and animal species.  We observed many Least Grebes (Tachybaptus domincus), another bird species whose U.S. distribution is restricted to South Texas in them.  We also observed the rare Runyon’s Water-Willow (Justicia pacifica) here. 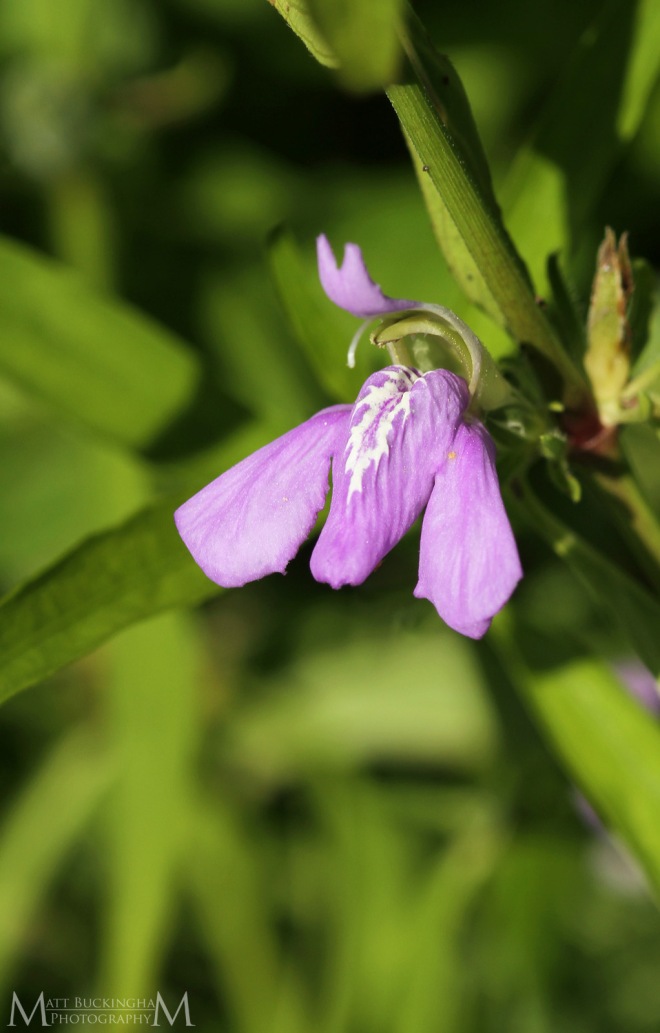 As one moves further west along the valley, one begins to notice more and more of a desert influence.  I observed many familiar species that I have photographed in West Texas including Snapdragon Vine (Maurandella antirrhiniflora) and Cenizo (Leucophyllum frutescens).  The latter blooms in response to rainfall and humidity. 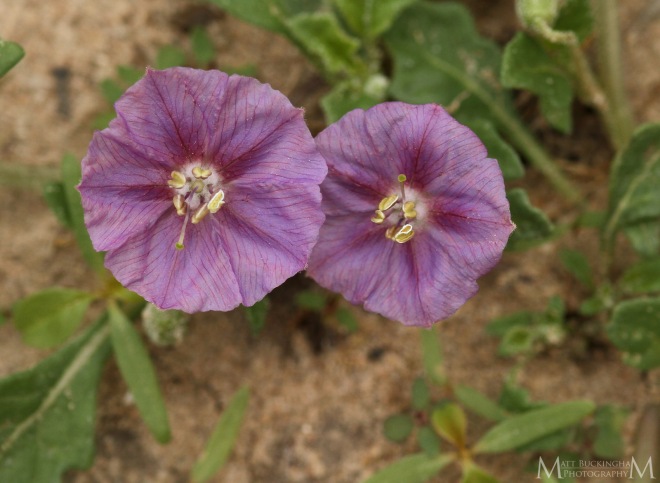 I also observed Bearded Prairie-Clover (Dalea pogonathera) here.  This member of the pea family is primarily a species of the Chihuahuan Desert.

South Texas is also home to a few woodsorrel species that do not have the typical “lucky clover” leaf.  Pictured here is Peonyleaf Woodsorrel (Oxalis dichondrifolia).

The open caliche hills were home to the beautiful Berlandier’s Nettlespurge (Jatropha cathartica), which is restricted to South Texas and adjacent Mexico.

The most spectacular element of the Tamaulipan thornscrub, however, were the cacti.  These famed succulents were my main target in South Texas, and I was fortunate to observe many species.  Though my next two blog posts will be dedicated to the incredible diversity of South Texas cacti, I have decided to provide a preview of things to come below.