When westward expansion was gripping the nation during the 19th century, the American frontier was not defined by the towering mountains and rugged desert that exemplify the term today, but rather endless expanses of prairie inhabited by millions of American bison, pronghorn, elk, wolves, and grizzly bears.  As countless wagons wore ruts into the prairie’s earth, black-tailed prairie dogs kept a watchful eye for badgers and black-footed ferrets, and a chorus of thriving grassland songbird populations filled the air.

Today, the prairie is a very different place, however standing in an un-plowed stretch of prairie in Union County, New Mexico that reached from horizon to horizon, I could imagine what it may have been like.  I was overwhelmed in a land that seemed so initially sparse.  But here, the diversity is in the details.  A diversity of nondescript grasses and small wildflowers, pollinators, and cryptic prairie denizens.

It had been years since I explored the natural wonders of the aptly named Land of Enchantment.  New Mexico is one of the most biodiverse states in the country, and contains a wide array of habitat from alpine tundra to low desert.  Our ultimate destination in the state was the sagebrush laden foothills around Taos and the high peaks of the Sangre de Cristo Mountains.  Our journey would first take us through some of the finest expanses of shortgrass prairie in the country.

In the prairie around the base of Capulin Volcano, we found large groups of blooming Silvery Lupine (Lupinus argenteus).  This species also occurs in Texas, but is rare and confined to a few sites in the Panhandle near the border.  These New Mexican prairies, however, were loaded with them. 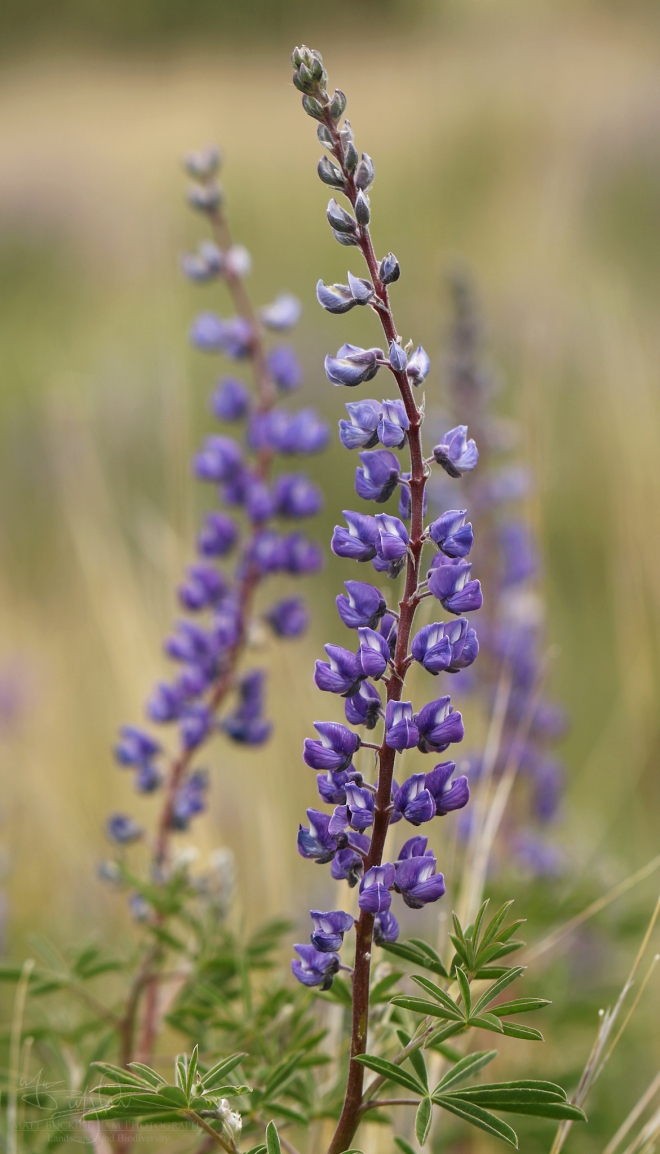 There are apparently some 11 varieties of Lupinus argenteus in New Mexico, which can make their identification a bit tricky.  We found at least two varieties growing in close proximity.

We also found Nebraska Lupine (Lupinus plattensis) blooming here, but its flowers were far past prime.  This species has been recorded in the Texas Panhandle as well, but like the Silvery Lupine, is very scarce.

Growing among the lupines were several other wildflowers, including several Wholeleaf Indian Paintbrushes (Castilleja integra).  I have always been fond of this genus of hemiparasites. 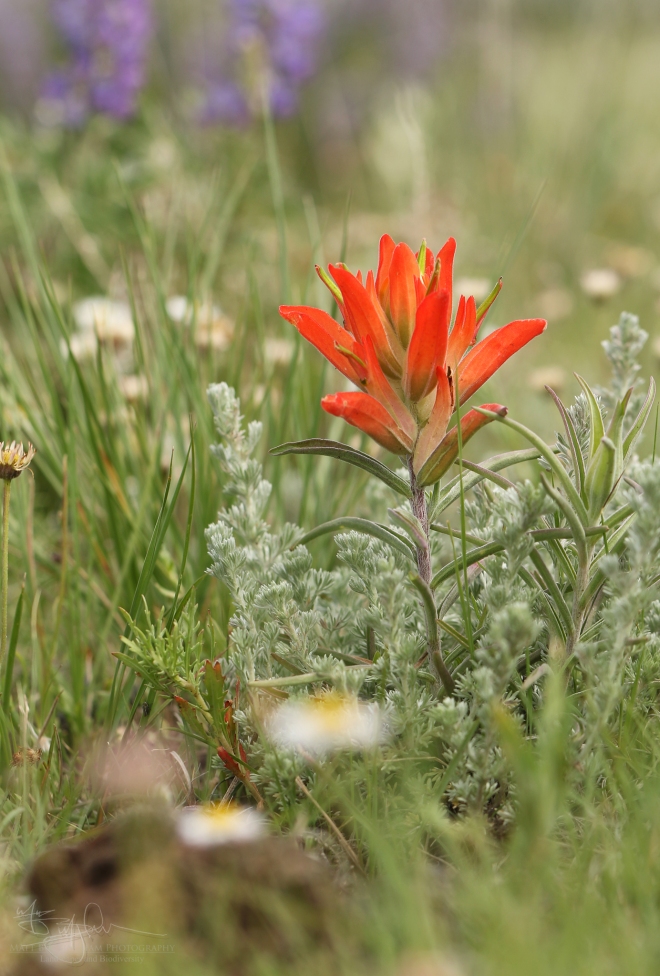 James’s Penstemon (Penstemon jamesii) was also common in this area.  This lovely plant is named for Edwin James.  James was one of the first anglo naturalists to explore the American West.  I strongly recommend reading more on this fascinating and influential figure who discovered, collected, and described many western species.

Near Capulin we found a single Spinystar (Escobaria vivipara) in bloom.  Further west, and at a higher elevation in Colfax County, however, we found several.  I was thrilled to find this tiny prairie cactus, which would have been essentially invisible if not for the bright pink blooms.

Growing at 8,000 feet I spotted a sea of blush swaying among the greens and grays of broad meadow.  It was Prairie Smoke (Geum triflorum).  This iconic prairie plant is named for its puffy achenes which resemble billowing smoke of a distant fire.  These can be seen developing in the background of the photo below.  Geum triflorum was long used by native cultures as a medicinal plant, and is purported to help a variety of ailments.

Years ago, during my family’s annual trek west, I always looked forward to spotting Pronghorn (Antilocapra americana) in the vast plains of eastern New Mexico.  This year we saw more than I ever remember seeing back then.  It was no doubt due in part to Carolina’s eagle eyes, however I like to think that the species is continuing its nearly century long rebound from near extinction in the early 1900s.

When Europeans first visited the West, there were an estimated 35 million pronghorn roaming the plains.  By the turn of the 20th century, it is estimated there were barely 10,000 left.  That’s a population decline of over 99.999%.  Like the American Bison, the open country that the pronghorn called home made them easy targets for hunters.  Fortunately, in the 1920’s conservation efforts began to protect both the species and its habitat, and today some estimates put the population at nearly a million. 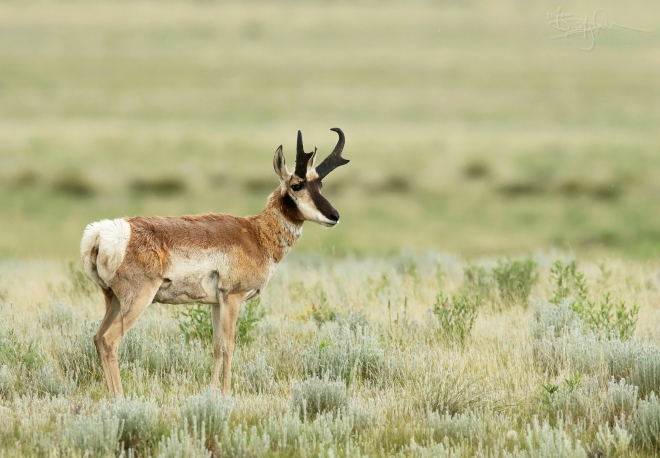 The pronghorn is a species that is at the same time, beautiful, bizarre, graceful, and gangly.  They are supremely adapted for life on the prairie, and for speed and endurance.  Adaptations like enlarged lungs, windpipes, and hearts, interlocking grooves in their joints that allow for a unilateral line of travel, and an enhanced circulatory system make them the fastest sustained runners on the planet.

Despite commonly being referred to as antelope, pronghorn are note closely related to true antelope, which are restricted to the Old World.  They are the only surviving member of the family Antilocapridae, which evolved in North America during the Miocene.  They’re extreme speed and endurance is believed to have evolved as a defense against the extinct American cheetah, which would have been a major predator of their habitats.  Today there are no predators that can come close to matching an adult pronghorn’s speed or endurance in open country.  Enlarged eyes with a field of vision of nearly 320 degrees that can spot a potential threat two miles away ensure that a potential predator would rarely get the chance to test this theory.  I can’t help but think that old pronghorn bucks know this, as they rarely seem concerned with my presence, even in areas where they would seldom encounter humans.  When I drop low to the ground, however, their tone changes as can be seen in the intense stare of the huge buck pictured below.

I could have easily spent a few days photographing pronghorn for as long as the light would allow.  We saw bachelor groups, solitary dominant bucks, and does with fawns.  This iconic species is as good a poster child for the prairie as any, and I can’t wait to be in the speedgoat’s presence once more.

The prairie saved one of her best surprises for last.  After spending a few days in the vicinity of Taos, we made the return trip through the high plains toward home.  While driving a remote stretch of prairie road I heard Caro call out “FOX!”  I glanced in my rear view in time to see a pair of tawny, house cat sized creatures.  Turning round, we were able to fix our gaze on a pair of Swift Foxes (Vulpes velox) lounging near their burrows.  We watched them for some time, and I captured a few documentation photos.  I had hoped to approach a bit closer for higher quality images, but they were quick to retreat to their burrows.  We waited for some time, but the wind was not with us and we soon concluded it was a futile attempt.  We left content in having captured a glimpse of this elusive prairie denizen.

My parting shot for this blog entry is an image of a double rainbow taken after we passed through a late afternoon thunderstorm.  The cool air, smell of wet grass and earth, sound of distant thunder, and broad view of the prairie perfectly sum up the magic I felt here, at the western edge of the Great Plains.