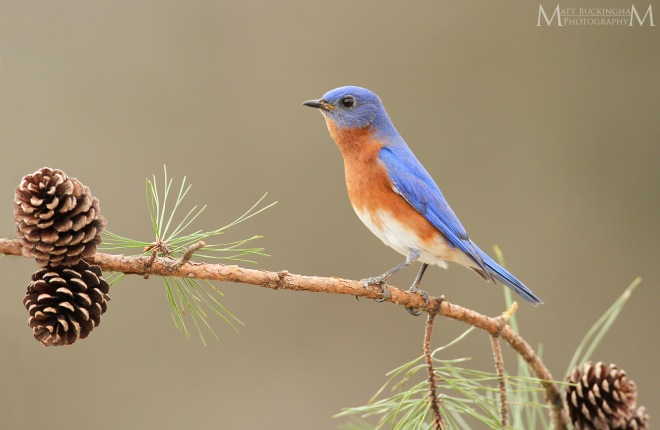 For the past several years I’ve been collecting images for a book I hope to publish on the natural history of the Pineywoods.  I have set out to capture images of species both common and rare, and those unknown and iconic.  Some of our more iconic birds, however, can be difficult to capture in a natural setting.

Take one of our most iconic American birds, the Eastern Bluebird (Sialia sialis), for example.  This member of the thrush family can be found open areas, such as pastures, fallow fields, rural residences, golf courses, etc. provided that there are at least some trees in the vicinity.  They are most often seen perched on fence posts, telephone wires, or similar human constructs.  For my book, however, I wanted to capture them in a setting that would mimic their habitat prior to human settlement.

Before I get into how we went about creating the images, I would like to share a little information on my subject.  The story of the Eastern Bluebird is a long an interesting one, filled with ups and downs. Historic accounts indicate that as the first settlers pushed into the bluebird’s habitat they were restricted to open pine savannahs, mature woodlands with open understories, prairie inclusions within broader expanses of forests, and similar habitats. The bluebird likely benefited from the these early settlers, as they cleared small patches of forests, resulting in an increase of the open habitat preferred by the birds.

Bluebirds are secondary cavity nesters, meaning that they nest in cavities that have already been excavated by primary cavity nesters like woodpeckers. Historically they would have selected abandoned tree cavities. Unfortunately for the bluebird, in the late 19th century two invasive cavity nesters, the European Starling and the House Sparrow, were introduced from the Old World. They quickly proliferated and outcompeted native Bluebirds for cavity sites.

As the 20th century wore on land conversion continued, and in increased urbanization eliminated the habitats that the bluebird, and so many other species depend on. The one-two punch of habitat loss and competition from the invading cavity nesters caused a sharp decline in bluebird populations, until by the 1970s naturalists noted that they had become exceedingly scarce.

Around this time bluebird boxes began to gain in popularity, and landowners who were enthralled by the striking beauty of the little thrushes established “bluebird trails” on their property. Bluebird boxes are crafted in a way that they are unsuitable for use by European Starlings. This, coupled with increased environmental awareness and regulations enacted to protect native wildlife, has resulted in a steady increase in bluebird populations. Today this iconic species is once again a common sight throughout much of the American countryside.

Armed with the knowledge of their historic habitat, James and I set out to capture them in a naturalistic setting.  James has a large group of bluebirds that utilize the bluebird trail around the cabin on his ranch.  We looked around the area for ideas to create suitable natural perches, and came across a Shortleaf Pine (Pinus echinata), its branches laden with pine cones.  Similar to its cousin the Longleaf Pine, shortleaf often occurred in open, occassionally savannah-like uplands alongside scattered oaks and hickories.  I speculate that in their old growth condition, these forests would have been ideal Eastern Bluebird habitat.

So we selected some prime looking shortleaf boughs and fastened them to the back of the bluebird boxes and adjacent fence posts.  We then set up a portable blind and waited.  Once again James lent me his Canon 600mm lens.  A note on the photo below, following our photo session I forgot to take an image of the setup, so I asked James to grab one for me the next time he was at his property.  When he set out to do so he realized that his cows had pulled down all of our perches.  He set them back up the best he could, and the setup in the image is essentially the same as the one we used to capture the image.

We waited for some time before the male bluebird came in to check on his box.  Almost immediately he landed on one of the perches.  Excitedly I rattled off a series of shots and as soon as he had arrived, he hopped down to the fence.

Ecstatic that our idea had worked so effectively, we anticipated that any moment he would hop back up onto one of the perches for more opportunities, but instead he just sat on the fence.  Occasionally he went to examine his nest box, but soon returned to the fence or to forage on the ground nearby.  After a while a female and a few of last year’s offspring showed up.  They were much more willing to land on the perches than the showier mature male.

Eventually he did return to some of the perches, each time providing us a few seconds to try and craft an image.  Though a setup like this requires a lot patience and downtime in the blind, ultimately it paid off with the type of images I was seeking.  If we can find a way to keep the cows from pulling down the perches, I think these limbs can also provide some benefit to the bluebirds.  Perhaps they will provide a better means to survey their territory, and attract invertebrates to provide an easy meal to their future offspring.  Either way, I’m happy for the opportunity to provide a glimpse into what the life of the Eastern Bluebird may have been like before the hand of man changed the landscape forever.

3 thoughts on “How To: Bluebird Photography”