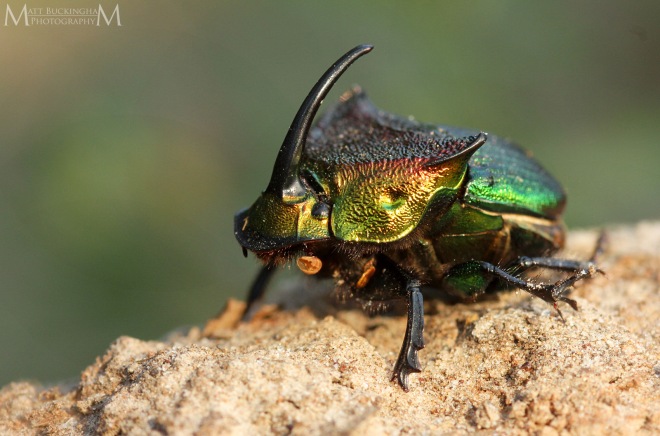 Since I was a child I have had a fascination with beetles.  They are the most diverse group of animals on the planet, and come in an extraordinary array of shapes, sizes, and colors.  Some have iridescent, metallic carapaces, some have impressive weaponry like horns and toothed mandibles.  And some, like the Rainbow Scarab, have both.

The Rainbow Scarab is a dung beetle.  They feed on the refuse of mammals, and in doing so help to prevent an unsafe build up of animal feces.  Feces can be a vector for diseases, and by removing it from the earth’s surface, the Rainbow Scarab and other dung feeding beetles help to prevent the spread of feces-borne illnesses, some of which can be fatal.

The benefits of dung beetles do not end there.  Rainbow Scarabs dig burrows below dung piles.  They then roll bits of the dung into balls and drag it below the surface.  The female then lays her eggs on the fecal matter, which will serve as nourishment for the developing larvae.  By spreading and depositing feces within the soil, the Rainbow Scarab is in effect fertilizing the landscape.

Rainbow Scarabs are broadly distributed east of the Rocky Mountains.  In East Texas they seem to prefer sandy soils, however elsewhere they have been documented in a variety of soil types.  The individuals pictured are from a longleaf pine savannah.

The strikingly beautiful Phanaeus vindex has been a favorite of mine since childhood.  I have observed and had the opportunity to photograph them on numerous occasions, however I have never been happy with the resulting images.  This year i hoped to capture some images that really showed off their brilliant iridescence.  Try as I might, I found that the age-old adage that “pictures can’t do them justice” really does apply with the Rainbow Scarab.  Their color seems to change depending on the angle of the light, and I found it impossible to capture their true brilliance, though I sure had fun trying.

For more on these fascinating creatures and the benefits they provide I strongly recommend this link: