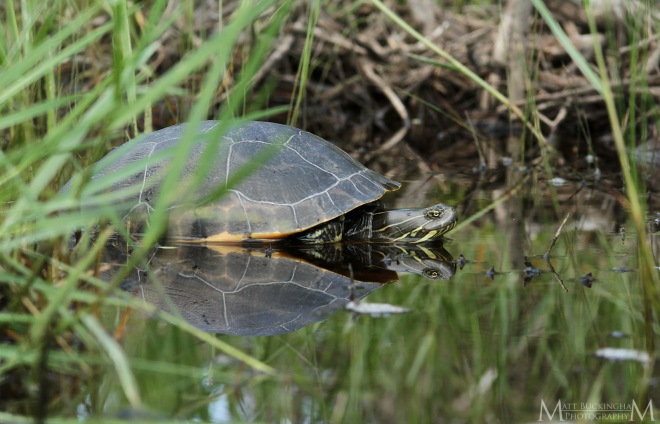 Before I post a recap of June’s discoveries, I wanted to highlight a special encounter of a seldom seen denizen of eastern Texas.  For some, the Western Chicken Turtle (Deirochelys reticularia miaria) is the holy grail of Texas Turtles.  It is a rarely encountered species of the coastal plain in the southeastern United States. Here they primarily inhabit ephemeral wetlands, from oxbows in floodplain forests, to seasonal marshes and potholes in coastal prairies.

They appear to be uncommon and declining throughout most of their range, and Texas is no exception. Here they are rarely seen and poorly understood, though recent studies are shedding some light onto their range and habitat preference in the state.

Perhaps the most distinctive feature of this species is its extremely long neck. When I spotted this species individual in the road its neck was fully extended. It was the last thing I was expecting to see while exploring the prairies and marshes of the upper Texas coast, but I was beyond thrilled to encounter it. I moved it to a safer location where I captured this image.

One thought on “The Chicken Turtle”